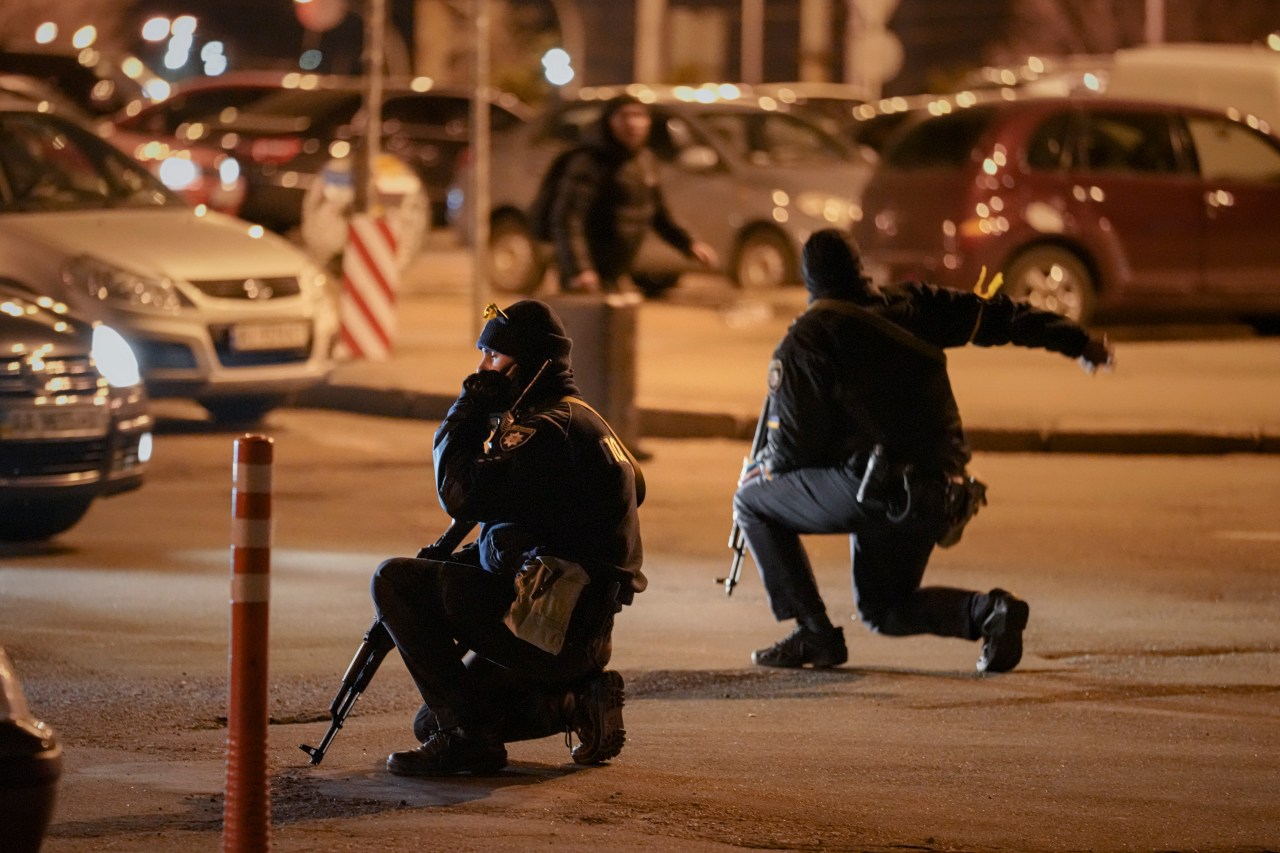 Ukrainian President Voldoymyr Zelenskyy called the assault on residential areas in Kharkiv “clearly a war crime” as the country’s second-biggest city was pummeled.

Though Russia has denied targeting civilian buildings, videos and photos from Kyiv and Kharkiv show they’ve taken a beating. Authorities in Kharkiv said at least seven people had been killed and dozens injured. They warned that the real casualty rate could be far higher.

The British Broadcasting Corporation reported early Tuesday that 70 Ukranian soldiers have been killed in a Russian artillery strike on Okhtyrka, near the Russian border. Ukraine’s Parliament tweeted a tribute to the servicemen, saying “Eternal glory to the heroes of Ukraine.” Parliament said they were killed by Grad missiles.

The BBC also reported that the Russian military has now completely surrounded the southern Ukranian city of Kherson.

The new fighting came on the heels of peace talks in nearby Belarus, which only produced the promise of more talks. All citizens can do is try to escape via crowded train stations and highways, hunker down in homes or shelters or join in the fighting.

“I sit and pray for these negotiations to end successfully, so that they reach an agreement to end the slaughter,” said Alexandra Mikhailova, weeping as she clutched her cat in a shelter in Mariupol. Around her, parents tried to console children and keep them warm.

But the messaging from Moscow is hardly peace-minded.

For the second day in a row, the Kremlin raised the specter of nuclear war, announcing that its nuclear-capable intercontinental ballistic missiles, submarines and long-range bombers had all been put on high alert, following President Vladimir Putin’s orders over the weekend.

Stepping up his rhetoric, Putin denounced the U.S. and its allies as an “empire of lies.”

Meanwhile, an embattled Ukraine moved to solidify its ties to the West by applying to join the European Union — a largely symbolic move for now, but one that is unlikely to sit well with Putin, who has long accused the U.S. of trying to pull Ukraine out of Moscow’s orbit.

The situation on the ground has not proceeded as rapidly as some predicted last week. Expectations of a swift “decapitation” of the Ukrainian government have been replaced by some admiration that Ukraine’s forces have been able to keep Russia’s large army from gaining momentum.

There is some speculation that the first wave of Russian troops was merely intended to soften up Ukraine’s defenses, and that many more soldiers are now entering the country in a much bigger, second wave — as indicated by the huge line of military equipment headed toward Kyiv.

Regardless, some experts are uneasy about what Putin may do next.

“You have a Putin who’s almost backed into a corner and is going to raise the stakes,” retired Gen. Richard Newton said Monday on “NewsNation Prime.”

Last week, retired Gen. William Boykin confessed on “On Balance with Leland Vittert” that he’s concerned Putin may follow through with his nuclear threat.

“I’m not so sure that if they got bogged down, that that would ultimately be a Rubicon that they’d be willing to cross just to be able to get their troops out,” Boykin said Friday.

Asked at an unrelated event wonday as he passed a group of reporters if Americans should fear nuclear war, President Joe Biden didn’t break stride as he responded, “No.”

The Associated Press also contributed to this report.


Not sure how to find us? Here’s how to watch NewsNation on air and online.