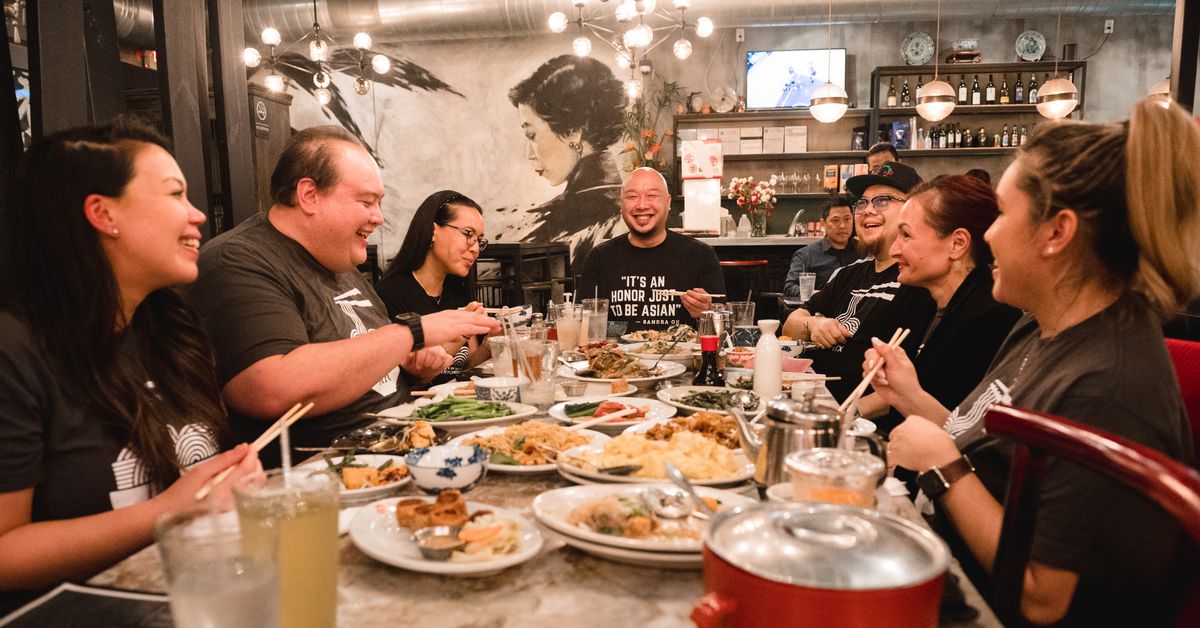 In February 2020, an online rumor spread like wildfire alleging that a major Asian supermarket in Bellaire’s Chinatown had a confirmed case of COVID-19. Within hours, the grocery store shut down, and for the rest of the week, Chinatown’s businesses were at a standstill.

Blood Bros BBQ co-owner Terry Wong, who grew up in the Chinatown area, was crushed. “I was freaking out for all the businesses. I was thinking, ‘I don’t want them to close.’ I wanted to do something,” Wong recalled.

Deciding that he couldn’t do it alone, Wong began enlisting friends like Stevie Vu, now director of operations of Asia Society Texas Center, to help. Together, they decided that the best, most cost-effective method of generating support for Chinatown’s Asian-owned businesses and restaurants would be to combat the harmful misinformation where it started in the first place — online.

The group launched the Chow Down in Chinatown Facebook group that same month — a platform where they envisioned people could post about their favorite dishes and experiences at Asian-owned restaurants in Chinatown, while also sharing news about their businesses to generate more support.

The height of the COVID-19 pandemic in 2020 sparked a wave of fear around the country, and in Houston, it was no different. Many restaurants shuttered, and while owners and diners heeded social distancing protocols and stay-at-home orders, the city’s Asian-owned restaurants felt a different kind of isolation.

Misplaced blame and backlash materialized in the form of decreased visitors and harmful rumors — so much so that local activists and community members, including Houston Mayor Sylvester Turner, spoke out, urging locals to visit and support their local Asian-owned restaurants. Meanwhile, groups such as Chicago’s Celebrate Argyle and bands of chefs and restaurateurs around the country have stepped in to counterbalance the racist paranoia. As the pandemic has waxed and waned over the past two years, the influence of organizations such as Chow Down in Chinatown endures. “We wanted to keep everyone in business,” Wong says.

Wong’s friends Michelle Nguyen, Lonny Yu, Gilbert Landras, and Natasha Wilson signed on as the administrators for Chow Down, sometimes holding weekly dinners in the city to discuss their project. And for a year, the crew worked together, collecting and broadcasting Chinatown’s restaurant news and updates on the Facebook page, sometimes physically driving to each location — pen and paper in hand — to report updates about fluctuating hours, closings, best dishes, and messages from the restaurant owners themselves. For mom-and-pop establishments that lacked a social media presence and owners who did not speak English fluently, Chow Down in Chinatown became their translators — their voice, Vu said.

“We tried to relay as much as we could through the Facebook community group to dispel all the misinformation with factual information, and to also give the personal connection we have to the food and put a face to it so it’s no longer generalized,” said Vu, adding that Chow Down “really resonated with the community.”

The page has since garnered more than 20,000 followers.

Droves came out to support Katy Asian Town’s Chung Wang BBQ when the owner Miao Liao’s husband died of cancer in March 2020. Alex Au-Yeung, the James Beard Award-nominated chef of Phat Eatery, wrote to the group in July 2020, “imploring (them) to swing by Katy Asian Town to grab some Chinese BBQ” at the neighboring restaurant. He also added Chung Wang to Phat Eatery’s delivery system to make it easier for people to support them. Au-Yeung’s post garnered 228 shares and nearly 100 comments. Both Wong and Vu said Liao was moved to tears after seeing lines of customers wrapped around the corner for pickup and delivery. The support lasted for days, said Liao’s sister Emily Liao.

“We are so grateful for all of the people at Chow Down in Chinatown,” Emily said.

Vu added, “It was a very loving experience during a time when it was high stress.”

Beatrice Wong, managing director of D-Square Shopping Center, historically known as Diho Square, said the Facebook page has allowed people to connect with each other over food and find restaurants to support during a time when COVID brought on feelings of anxiety and negativity, particularly around dining out. “They flock to support, and it’s not just businesses opening. It’s also buildings closing down,” Beatrice Wong said.

Christine Nguyen, owner of the Sweet Boutique Bakery in Sugar Land, said she was on the verge of closing her bakery in 2020 when Chow Down followers showed up.

As a last-ditch effort to bring in more customers, Nguyen tried making a large batch of baked mochi donuts — a first for the Houston area, but pandemic guidelines were strict and many people were wary of being indoors. Nguyen’s sister put out a plea on Chow Down, and that same week, there was a long line of visitors from Chow Down, Nguyen said.

“We weren’t expecting much, but we took off, and we were able to stay open because people came out to support,” Nguyen said.

Nguyen, who continues to make around 100 mochi donuts daily, said she returned the favor — visiting other small businesses featured in Chow Down — so much so that she barely had time to cook at home. She even gained weight, she said. “I ate out so much,” Nguyen said with a laugh. “I would post and try to share my own Instagram to get other people to support them because they helped me.”

While some businesses find it difficult to determine whether big spikes in activity are correlated to Chow Down’s postings, Beatrice Wong said business owners value the page for its feedback. It not only helps improve their food and service, but it gets the word out about their dishes, she said.

“You’ve gotta know this cuisine in order to crave it,” Wong said.

In around two years, the group has evolved into a platform for positive reviews, recommendations, and news happening within the Asian-owned restaurant industry in Chinatown and surrounding areas like Katy, Pearland, and Sugar Land. Many times, it’s as light-hearted as people asking for the best dim sum, pho, and ramen recommendations, or sharing their experience with a photo for added proof. For Vu and other admins, it’s a second job ensuring that reviews stay positive, he said.

The page hasn’t been able to save all restaurants, though. Some of Terry Wong’s favorites, including Hong Kong Food Street, have closed — some falling victim to the overall effects of COVID-19 on the industry, while others battle a new-age competition that requires Instagrammable eats, significant financial backing, and a strong social media presence, he said. This means many newer restaurants from outside of Houston have been swooping in.

“Anything that closes, within weeks, there’s something opening … and if you don’t change or you don’t pivot, you don’t last,” Wong said.

Still, Wong and Vu say support on Chow Down continues to grow, with notifications and several pending requests pouring in each day.

The Facebook group has also experimented with other ways of generating support, including a “pay-it-forward” initiative, in which they raise funds to help buy meals for people visiting certain restaurants, and mukbang-style fundraisers, where admins broadcast themselves gorging down dumplings and noodles on social media for donations that go to local restaurants that experienced challenges during the pandemic.

In a time when many restaurants are under immense pressure and short-staffed, Nguyen said the group has been a breath of fresh air.

“People are quick to be judgy, but it’s not like that on Chow Down at all,” Nguyen said. “We’re there to uplift each other.”

Editor’s note: This article has been updated to include the correct spellings of the admins of Chow Down in Chinatown – Houston.