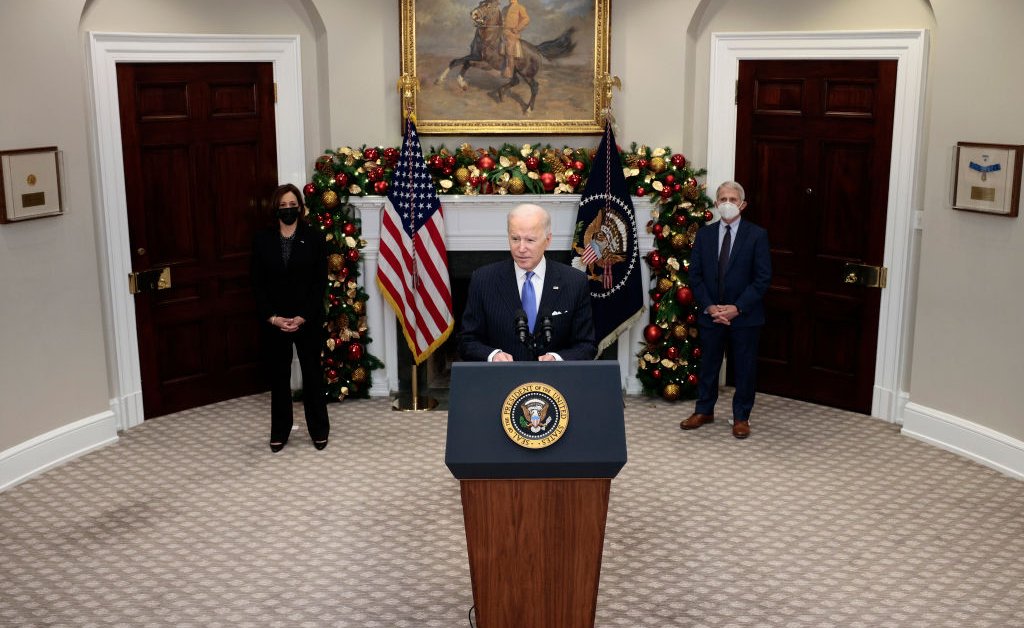 One of Joe Biden’s greatest political vulnerabilities going into next year is a mutating virus.

Voters do not seem to be rewarding President Biden for his big-dollar legislative accomplishments. He’s getting declining marks in polls for his handling of the pandemic, despite having signed into law trillions of dollars in pandemic funding and ensuring there are enough vaccines to protect those willing to get them. His approval rating has dropped to the low 40s.

Americans are frustrated with the status quo and want the pandemic to end and the economy to stabilize after months of anxiety about supply chain shortages and rising prices. They’re counting on Biden to get the virus under control and bring things back to normal, as he has promised to do. But a new COVID-19 variant threatens to drag the ordeal out longer, at a time when a quarter of eligible Americans still haven’t gotten their first vaccine shot.
[time-brightcove not-tgx=”true”]

That’s why as reports emerged in recent days about the rapid spread of the Omicron variant of COVID-19, Biden’s White House took swift action. After being briefed on the new variant on Friday, Biden issued a travel ban on flights from eight countries in southern Africa. Scientists launched weeks of tests to see how effective existing vaccines are against Omicron, White House Press Secretary Jen Psaki told reporters. The Centers for Disease Control and Prevention upgraded its recommendation that everyone over 18 to get a booster shot. In a further sign of urgency, Biden’s staff scheduled a televised address for the President to deliver on Monday to encourage more people to get vaccinated and reassure Americans his Administration was working to slow the spread of the variant and deploy additional government resources to respond.

As Biden stood in front of a mantle adorned with Christmas garland in the Roosevelt Room of the White House on Monday, his message seemed intended to raise awareness without spreading alarm. The new variant is “a cause for concern, not a cause for panic,” Biden said. Biden highlighted the progress Americans have seen since he took office, asking viewers to think about how this year’s holiday season will be different from the socially distanced celebrations a year ago. Last year, 1% of Americans were vaccinated. By the end of this year, the White House estimates that figure will be at 71%. Last year, the majority of American schools were closed. Now, nearly 100% of schools are now open.

Since new mutations are most likely to emerge from the coronavirus spreading among unvaccinated people, Biden urged Americans who haven’t been vaccinated to get the shot. Being vaccinated is also the best way for people to protect themselves from a COVID-19 infection leading to serious illness and death. He promised that Americans will always have the most current vaccines available and for free. “Let me be clear, not a single vaccine shot America has ever sent to the rest of the world will ever come at the expense of any American,” he said. “I will always make sure our people are protected first.”

He said the steps he took over the weekend to stop travel coming from several southern African countries are a short term measure to give Americans more time to get vaccinated, and for those that are vaccinated to get a booster shot. “Travel restrictions can slow the speed of Omicron, it cannot prevent it,” Biden said. “Here’s what it does: it gives us time.”

But while beating back the pandemic is a top priority—an urgent public health imperative as well as a political one—Biden is walking a fine line on the economy. Biden ruled out going back to an era of lockdowns and closed schools. “If people are vaccinated and wear their mask, there’s no need for lockdowns,” Biden said. Those measures might not be so easy to accomplish. Many Republican lawmakers have fought against vaccine requirements and mask mandates.

Biden ran on a promise to restore competency to the White House after the chaotic presidency of Donald Trump, and to bring the country out of the pandemic. The economy has grown since he took office and unemployment is down, but a surge in demand for goods has strained the supply chain and led to increased prices and backlogs. The White House is now doing what it can “to show competent management” and demonstrate that the Administration is “listening to public health advice,” says a former Biden Administration official still in touch with the White House.

The Omicron variant seems poised to be the latest test of Biden’s promise to steer the country out of crisis.