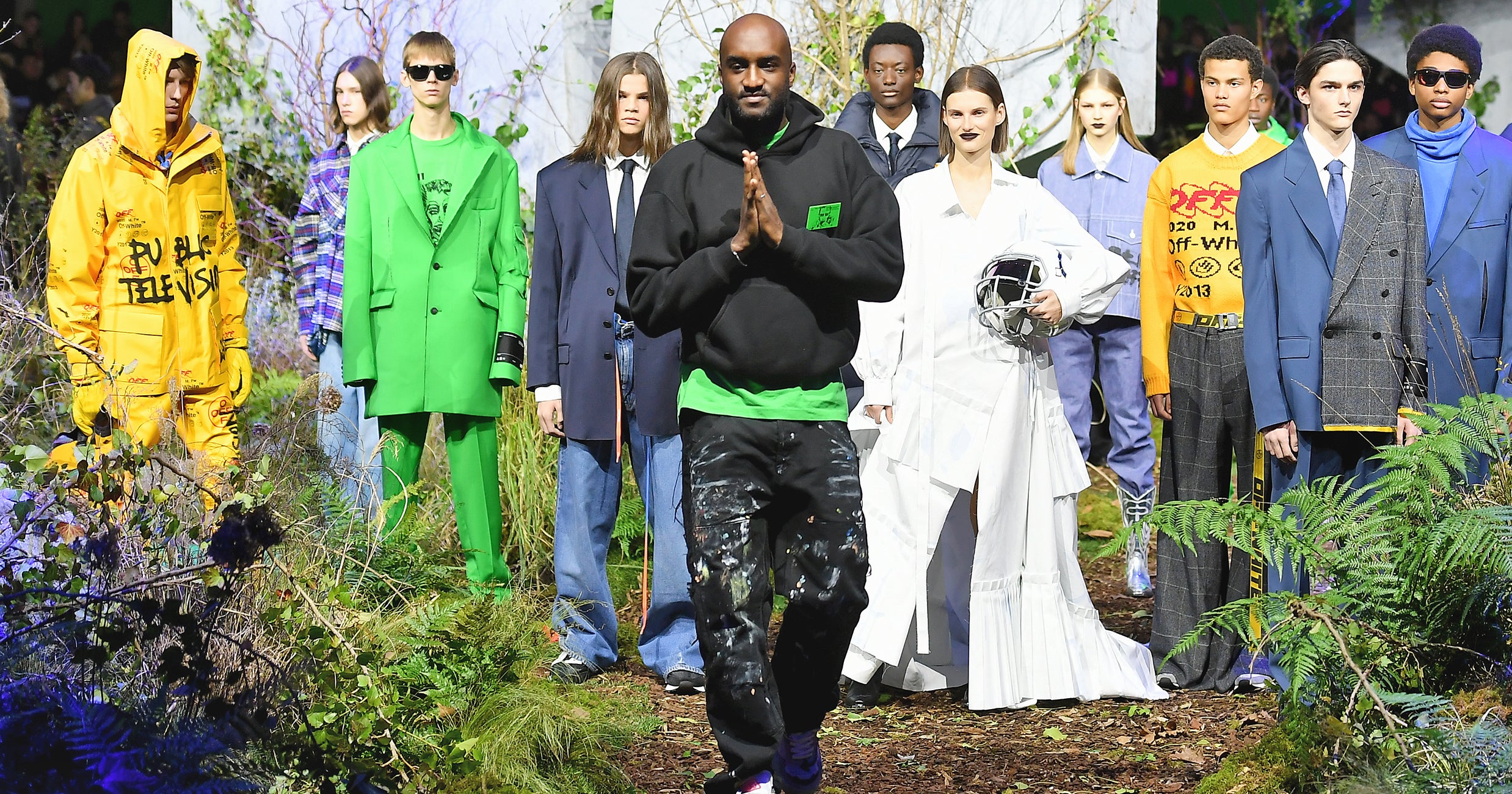 Barrier-breaking designer. Genre-bending artist. Visionary. These are some of the ways people have described Virgil Abloh after it was announced that the 41-year-old creative died on Sunday following a private two-year battle with cancer. Over the last decade, the prolific designer — the founder of streetwear label Off-White and Louis Vuitton’s men’s artistic designer — produced no shortage of memorable designs, ranging from Off-White’s “Little Black Dress” (that was displayed at the Costume Institute 2020 “About Time” exhibit) to sought-after collaborations with everyone from artist Takashi Murakami to brand giants like Ikea, Evian, and Nike.

But unlike most other designers that have reached similarly dizzying levels of cultural success, Abloh always viewed his place in fashion as closer to the earth. Maybe because, regardless of the numerous accolades, he never stopped thinking of himself as an outsider — a “skater kid” from Chicago, an architect who didn’t go to fashion school, a DJ, a Black designer working in luxury fashion. What comes to mind for me right now, is the “You’re Obviously In The Wrong Place” installation that I saw at Abloh’s retrospective at Chicago’s Museum of Contemporary Art in the summer of 2019. This, I imagine, is a phrase that Abloh heard often on his ascent to the highest echelons of the industry, one that influenced his career’s trajectory.

The creative’s story is well-known by now: The son of Ghanaian immigrants, Abloh first started working with Kanye West in the mid-2000s, going on to found Off-White, the Milan-based brand that bridged streetwear and luxury fashion, in 2013. By 2018, he was appointed as Louis Vuitton’s men’s artistic director. And while it’s the latter that marks the apex of his designer career by conventional standards of high fashion — in addition to being chosen to lead a storied house, an honor for any designer, Abloh also made history by becoming the brand’s first Black artistic director to do so in its 167-year history — it is far from the most important legacy that he is leaving behind.

Abloh was often quoted saying that everything that he did was for the “17-year-old version of myself.” Not only was he continuously inspired by the youth culture for his designs, but he was also dedicated to making room for others. And that’s the refrain heard most this past weekend — stories about times that Virgil reached out to work together, to create a community, to inspire others to follow dreams. “He always worked for a greater cause than his own illustrious career: to open the door to art and fashion for future generations, so that they — unlike himself — would grow up in a creative world with people to mirror themselves in,” Edward Enninful, the Editor-in-Chief of British Vogue, wrote in an Instagram post following the news. “Your advice and encouraging words were priceless and will never be forgotten,” echoed designer Sergio Hudson, who, earlier this year, debuted his collection at NYFW after dressing Michelle Obama for Inauguration Day. “You told me my destiny was set all I had to do was walk through the door. Those words gave me the confidence to ask for what I wanted and to push even harder.”

In the decades to come, Abloh will most certainly be credited for marrying streetwear with luxury fashion. He will go down in history for poking fun at fashion — see: Off-White’s signature scare quotes that challenged consumers to view everyday items as luxury ones — and exposing the ways in which high-end aesthetics are ultimately pedestrian pursuits. He will be remembered for democratizing luxury fashion, by injecting youthful, modern touches into Louis Vuitton, a brand that has long prided itself on tradition and experience over innovation. But, as Abloh continued to break boundaries of the notoriously exclusive industry, he remained as transparent about his design process as, as some have pointed out, the see-through suitcase he designed for Rimowa. For Abloh, this collaboration and sharing of ideas were as important as the tangible end products.

Abloh shared his knowledge with the future generation of creatives in an official capacity when he taught classes at London’s Architectural Association School and through mentoring programs, but, according to his friends and collaborators, he selflessly gave advice to anyone who happened to cross paths with him. “What is very important about Virgil’s work is that the whole time he’s doing it — whether you’re a young budding designer, musician, or architect — he is ‘giving you the cheat codes,’ as he likes to say,” said Benji B, whom Abloh appointed Louis Vuitton’s Music Director, in a 2019 interview with GQ.

Following the news of Abloh’s passing, other creatives confirmed this quality that made him a monolith among a field of gate-keeping designers. “You were a mentor to all of us. If you had the privilege of chatting with Virg for even a minute you would know he dropped gems,” wrote HBFIT founder and DJ Hannah Fallis Bronfman on Sunday. “Every time I left our convos he would leave me with a piece of advice that was so simple and yet so deeply profound. Thank you for leaving us with so many of your gifts.” In her post, former magazine editor and Instagram’s Director of Fashion Partnerships Eva Chen added, “He always wanted to help kids realize their dreams.” Given this sense of camaraderie and collaboration, it makes sense that the word that the Costume Institute chose to describe the Off-White piece selected, a delicate tulle gown skirt paired with an anorak by Canadian outdoor label Arc’teryx, for this year’s “In America: A Lexicon of Fashion” exhibit was “reciprocity” —  “the quality or state of being reciprocal (mutual dependence, action, or influence).”

As a fashion designer, Abloh broke all the rules and changed the luxury fashion game. His contributions to fashion and design through his creations will never be forgotten, but it’s his legacy — to inspire every 17-year-old to dare to dream, to never wonder whether they are in the wrong place — that will live on.

Like what you see? How about some more R29 goodness, right here?