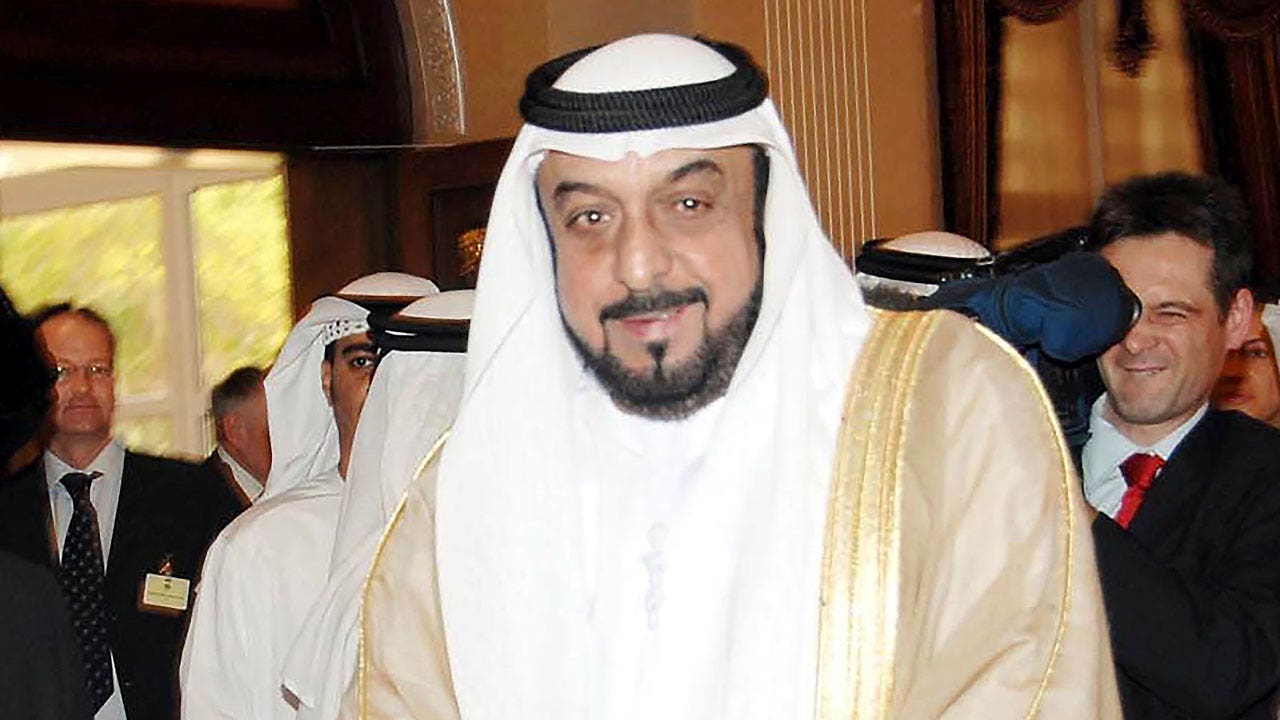 Khalifa, the president of the UAE, oversaw much of the country’s blistering economic growth and his name was immortalized on the world’s tallest building, the Burj Khalifa, after bailing out debt-crippled Dubai during its financial crisis over a decade ago.

The UAE’s Ministry of Presidential Affairs announced a 40-day period of mourning and a three-day suspension of work in all ministries and the private sector beginning Friday, including flags to be flown at half-staff.

He had long ceased having involvement in the day-to-day affairs of ruling the country. Instead, his half-brother, Abu Dhabi Crown Prince Mohammed bin Zayed, was seen as the de facto ruler and the decision-maker of major foreign policy decisions, such as joining a Saudi-led war in Yemen and spearheading an embargo on neighboring Qatar in recent years.

There was no immediate announcement about a successor, although Mohammed bin Zayed is anticipated to claim the presidency.

IRAN PROTESTS BREAK OUT ACROSS THE COUNTRY AMID SKYROCKETING FOOD PRICES

Khalifa, who has rarely been seen in official photos or at public events for years, succeeded his father, the UAE’s founder Sheikh Zayed, in 2004.

He suffered a stroke and underwent emergency surgery a decade later, though officials did not release the news until the following day. He has largely been out of public sight ever since.

In 2017, 2018 and 2019, Emirati state media published rare photographs and video of Khalifa. In the latest images, Khalifa wore white sneakers and a white traditional robe as he greeted Sheikh Mohammed and other rulers in the Emirates.

Khalifa, the eldest son of the UAE’s first leader after the federation’s formation in 1971, held the most powerful position among the seven semi-autonomous city-states stretching along the shores of the Persian Gulf and the Gulf of Oman. His role as president derived from his standing as hereditary ruler of Abu Dhabi, the UAE’s largest and richest emirate. Abu Dhabi serves as home to the federal capital.

Despite its size and vast oil wealth, Abu Dhabi often found itself overshadowed by the glitzy neighboring emirate of Dubai, the Middle Eastern commercial hub that showcases both the UAE’s bold visions and, at times, debt-fueled pipe dreams, including a massive palm-shaped man-made island that sits empty years after its creation.

As Dubai’s fortunes began to falter along with the global economy in 2009, Khalifa led efforts to protect the federation by pumping billions of dollars in emergency bailout funds into Dubai. The two emirates do not always see eye-to-eye on foreign policy decisions and compete commercially with one another. In 2003, Khalifa called for the creation of a new airline, Etihad Airways, which competes with Dubai’s successful and much larger carrier Emirates Air.

Khalifa increasingly used Abu Dhabi’s oil wealth to attract cultural and academic centers, such as branches of the Louvre museum and satellite campuses of New York University and the Sorbonne. He also presided over efforts to move the OPEC country beyond its reliance on petrodollars with investments in renewable energy research, including plans for a futuristic low-carbon desert city known as Masdar.

FAMILY OF FORMER US HOSTAGE SLAMS BIDEN PICK FOR COUNTERTERRORISM JOB: ‘WE ARE SHOCKED’

Abu Dhabi’s big spending overseas during Khalifa’s rule also helped push the emirate, which controls the bulk of the UAE’s oil reserves, out from Dubai’s shadow.

In 2007, the Abu Dhabi Investment Authority, one of the world’s biggest sovereign wealth funds, came to the rescue of an ailing Citigroup Inc. with a $7.5 billion cash injection. Less than two years later, another Abu Dhabi state fund made one of its biggest in a series of headline-grabbing purchases when it paid nearly 2 billion euros (then worth about $2.7 billion) for a 9.1% stake in German automaker Daimler AG, the firm behind Mercedes-Benz.

Khalifa, meanwhile, helped boost the UAE’s regional profile with relief missions to Pakistan after devastating floods and by sending warplanes to the NATO-led mission against Moammar Gadhafi’s regime in Libya in 2011.

Questions were raised during Khalifa’s rule about the UAE’s use of foreign military contractors, including one linked to the founder of the former Blackwater security firm, Erik Prince, who moved to Abu Dhabi in 2009. Prince was involved in a multimillion-dollar program to train troops to fight pirates in Somalia, according to an official who spoke to The Associated Press in early 2009.

But Khalifa’s name is perhaps most familiar around the world for its connection to the world’s tallest building, a nearly half-mile (828-meter) glass-and-steel spire in Dubai.

The name of the tower was unexpectedly switched from the Burj Dubai to the Burj Khalifa at its official opening in January 2010 following his decision to funnel billions of dollars to Dubai to save it from a full-scale financial meltdown.

Khalifa took over as the UAE’s president and ruler of Abu Dhabi in November 2004 following the death his father, Sheikh Zayed bin Sultan Al Nahyan, who is widely revered by Emiratis as the country’s founding father.

Khalifa’s image was ubiquitous, gracing every hotel lobby and government office across the country. But unlike Dubai ruler Sheikh Mohammed bin Rashid Al Maktoum, the federation’s vice president and prime minister, he was rarely seen in public.

A U.S. diplomatic cable made public by WikiLeaks in 2010 uncharitably described the president as “a distant and uncharismatic personage.”

Khalifa was born in 1948 in the inland oasis of Al Ain, near the border with the sultanate of Oman, and named after his great-grandfather, Sheikh Khalifa bin Shakhbout.

In 1969, while the area was still a British protectorate, Khalifa was named as Abu Dhabi prime minister and chairman of the emirate’s Department of Defense, which later became the core of the UAE’s armed forces. After independence in 1971, he became defense minister along with other roles. Later, the title of supreme commander of the armed forces was assumed by Mohammed bin Zayed.

Although the UAE’s ruling sheikhs hold near absolute power, Khalifa began an experiment with elections by allowing limited voting – by a hand-picked electorate – for half the members of a 40-seat federal advisory body in 2006. Subsequent rounds of elections in 2011 and 2015 failed to attract even two out of five of those given a chance to vote.

The UAE saw none of the Arab Spring street protests that shook other parts of the region, though in the wake of that unrest, Khalifa oversaw tightening crackdowns on Islamists and other activists, drawing criticism from international rights groups. The UAE also supported efforts in the region to quash the Muslim Brotherhood, including in Egypt.

He was believed to be among the world’s richest rulers, with a personal fortune estimated by Forbes magazine in 2008 at $19 billion. He built a palace in the Seychelles, an island-chain nation in the Indian Ocean, and faced complaints there about causing water pollution from the construction site.

In 2007, Khalifa made a major gift to the Johns Hopkins Medicine complex in Baltimore. The size of the donation was not disclosed, but it was described as “transformational.”

After he fell ill, it fell upon his half-brother and designated successor, Mohammed bin Zayed, to handle many of Khalifa’s duties following the stroke, often in conjunction with Dubai’s Sheikh Mohammed. The transition went largely unnoticed, as many Emiratis and foreign diplomats long assumed that the crown prince was a central power broker in the UAE’s leadership.

In September 2014, the Emirates became one of the most prominent Arab participants in U.S.-led airstrikes against the Islamic State militant group in Syria, deploying its first female air force pilot on the initial raid.

Those sorties were followed by a muscular intervention into Yemen as part of a Saudi-led coalition on the side of the impoverished country’s internationally recognized government against Shiite rebels who had seized the capital of Sanaa and other areas. The UAE deployed thousands of troops, 52 of whom were killed in a September 2015 missile attack on their base – the heaviest military loss in the country’s history.

Khalifa’s personal life was not much in the public eye. Like many in the Gulf, he was passionate about the traditional sport of falconry and was said to enjoy fishing. He is known to have had eight children – two sons and six daughters – with his first wife, Sheikha Shamsa bint Suhail Al Mazrouei. He is also survived by several grandchildren.