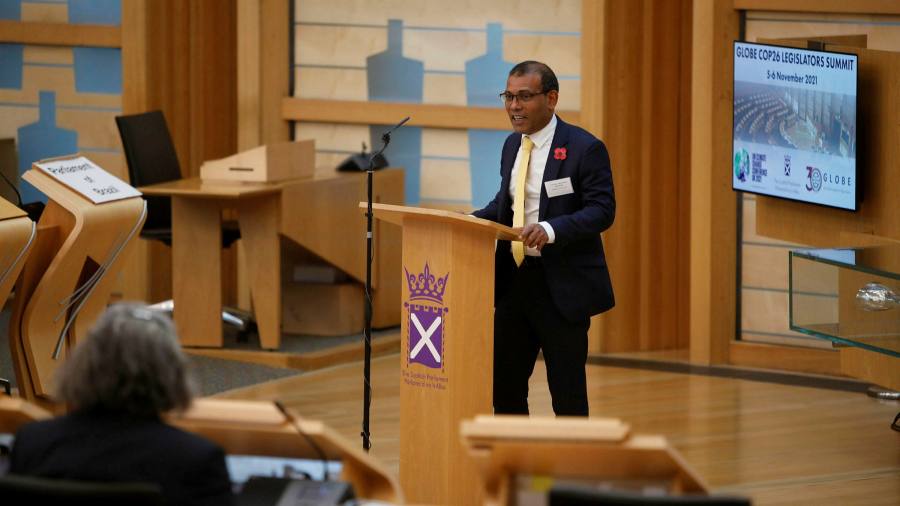 This article is an on-site version of our Moral Money newsletter. Sign up here to get the newsletter sent straight to your inbox.

Greetings from a packed conference centre in Glasgow where crowds were enthusiastically amassed yesterday (breaking all manner of social-distancing rules) to listen to Barack Obama. The former US president’s calm, optimistic and well-rested demeanour was a breath of fresh air after the frenzied, sometimes dampening, tone of recent days. But his message was bracing: he denounced the slow pace of action in Russia and China, lamented the fact that the world is “nowhere near where it needs to be”, in terms of meeting climate commitments, hailed the energy of youth activists — and highlighted the plight of island nations now being submerged by the oceans as a “canary in the coal mine” of climate change.

It is a powerful call to arms — and Simon yesterday interviewed the charismatic leader of one such island, the Maldives, to hear what this plight means for the world’s corporate and financial leaders. Read it below. And if any brilliant entrepreneur finds a way to create genetically modified coral to save the disappearing reefs, let him (and us) know.

Meanwhile, leaders from industry are stalking the corridors today to talk about innovation and transport, and a delegation of politicians from Washington, such as Nancy Pelosi, Kirsten Gillibrand and Chris Coons, have been trying to convince sceptics that America is leading the battle against climate change. It remains a hard sell. But there are rumours that the White House may soon offer more climate pledges — and gossip about whether China will produce more concessions, if it does. Cutting a deal will be hard without the Obama magic we witnessed in 2015 in Paris (and canny French leadership). But don’t count this out. Read on. (Gillian Tett)

All nations are facing serious hazards from climate change, but a few, including Mohamed Nasheed’s, are threatened with total devastation. As the Maldives’ president, Nasheed became a global star at the 2009 COP15 in Copenhagen, warning that his country of a thousand islands — where the highest point is just two metres above sea level — would vanish beneath the Indian Ocean unless radical action was taken on climate change.

Nasheed’s words in Denmark failed to galvanise serious measures. He went on to be forced from office and into exile, returning home in 2018 only to be critically injured in a bomb attack earlier this year. After a swift recovery he has resumed his international pressure campaign at COP26 in Glasgow, where we met yesterday.

Compared with Copenhagen, this COP felt “a little more promising”, said Nasheed, who now serves as leader of the Maldives’ ruling party. He pointed to the galvanising impact of the youth climate movement as well as the increased awareness of policymakers, following a string of extreme weather events, of the immediacy and severity of the physical risks.

He said he was encouraged by the intergovernmental agreements unveiled during the conference, including commitments to reduce deforestation and methane leaks. But he warned that this was just a starting point. “Signing up to an international agreement is one thing, but you have to ratify it at home. And to do that you have to have the necessary legislation.”

Nasheed is pushing for such measures through the Climate Vulnerable Forum, where his country is one of 48 developing nations calling for increased climate-related assistance from the rich countries that bear the bulk of responsibility for the climate crisis. A central focus of discussion at COP26 has been the rich world’s failure to meet a longstanding pledge that this aid would reach $100bn a year by 2020.

“It’s not just been missed — it’s been missed by miles,” Nasheed said. Beyond the quantum of the support, he added, countries should pay attention to the means of disbursal. An excessive focus on project finance risked wasting money on project-specific bureaucracy, he said. Instead, Nasheed argued, funding should be channelled primarily towards the central budget of developing nations, which should be allowed to direct its deployment.

Nasheed has also been seeking to encourage a nascent field of scientific research into helping coral reefs — which surround every one of the Maldives’ islands — to adjust to climate change. Rising temperatures have been driving an unprecedented wave of “bleaching” events that threaten to kill nearly all the world’s coral during this century. Cutting-edge science, in genetic modification and other areas, might offer some hope, Nasheed said.

Even as the Maldives and other vulnerable countries look to build up their adaptation strategies, Nasheed added, it was vital to build momentum towards serious global emissions cuts. And to do that, he said, countries would need to start giving more frequent reports on their climate plans. Under the 2015 Paris agreement, these plans must be updated every five years. Nasheed said that this should instead happen annually, to give the world the best chance of limiting global warming to 1.5°C.

I mentioned the widespread fears that it was already too late to limit warming to that level — that the 1.5°C ship, had already sailed.

“It can’t,” Nasheed said. “That ship cannot sail. We cannot give up hope on that.” (Simon Mundy)

Quote of the day

China is not getting sufficient credit for its action on climate change, Wang Yi, a senior adviser to the country’s COP26 delegation, told The Guardian.

“Unfortunately, China cannot change the China narrative,” Wang said. “To reach our targets, we have outlined a change to our entire system, not just in the energy sector but across society and the economy. Nobody knows this.”

Beyond Glasgow: the worldview

While many nations drag their feet on substantive climate action, at least one country is still fighting even to be a part of the conversation.

“Taiwan should be included as part of the solution to address the global climate crisis,” Tsai Ing-wen, Taiwan’s president, said on Sunday, calling for the island’s inclusion in the Glasgow climate talks.

Taiwan was not officially invited to the COP26 meeting, as it is not a member of the UN. But Taiwan has sent delegates to Glasgow and held events on the sidelines to showcase its willingness to combat climate change and engage with other countries. Tsai made remarks via a recorded video message.

Beijing has largely blocked Taiwan’s efforts to participate in the UN, as China considers Taiwan as a province of the country.

Taiwan was excluded from the Paris agreement, too. Without international engagement, Taiwan has been slower than many other economies to formulate climate policies, Chou Kuei-tien, a professor at National Taiwan University, told Nikkei Asia. But things are beginning to change for the better.

Earlier this year, the island pledged to achieve net zero carbon emissions by 2050. Its tech manufacturers also face rising pressure from global customers, such as Apple, to cut their carbon footprints.

Taiwan’s pleas to be part of COP26 have fallen on deaf ears. But with the country’s rising geopolitical importance, the call for Taiwan to have a greater role at the UN now has US support. (Tamami Shimizuishi)

Scoreboard — Key news and analysis behind the business decisions in sport. Sign up here