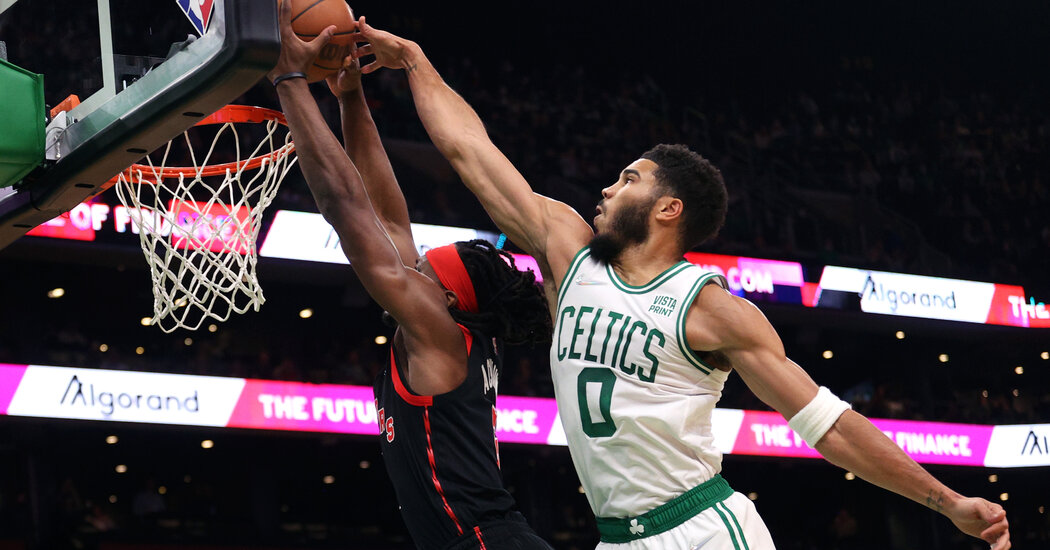 BOSTON — The Celtics have spent recent years as a team of almost. Almost good enough to contend for an N.B.A. championship. Almost mature enough to reach their potential. Almost complete enough to play at a high level on a consistent basis.

But a bunch of almosts would have been an improvement from all the questions and concerns the Celtics began collecting at the start of the season. It is never much fun when each game feels like a litmus test — of Ime Udoka’s first season as the team’s coach, of the chemistry experiment between Jayson Tatum and Jaylen Brown, of the growth of the players around them.

So when Marcus Smart, the team’s starting point guard, criticized Tatum and Brown for essentially hogging the ball after a loss to the Chicago Bulls on Nov. 1, Boston seemed in danger of spiraling toward premature dysfunction.

Since then, though, something unusual has happened: The Celtics have won three of four games to position themselves among the best sub-.500 teams in the N.B.A. before their game against the defending champion Milwaukee Bucks on Friday night.

“I think we’ve jelled to some extent,” Udoka said, adding, “We’re learning the intensity and effort it takes to win every night.”

The Celtics, who improved to 5-6 by defeating the Toronto Raptors, 104-88, on Wednesday, are suddenly defending, scoring, rebounding and winning. For someone like Udoka, who is new to his high-profile job, it could not have happened soon enough. Strange but true: The Celtics’ victory over the Raptors was their first home win of the season. The challenge now is to sustain that momentum.

“I don’t think anybody in the locker room is getting antsy about the losses,” the reserve guard Josh Richardson said. “Just trying to progress. I think we’re all starting to find our footing.”

There have been growing pains. In their home opener on Oct. 22, the Celtics stunk things up in a 32-point loss to the Raptors and were essentially booed off the court. It was a blowout that came at the hands of a young team that many have pegged as bound for the draft lottery. But Scottie Barnes, the Raptors’ first-year forward, has been a revelation, and he looked like the best player on the court. Udoka bemoaned his team’s lack of effort.

Sadly for Boston, that game was not an anomaly. At the start of November, things seemed to bottom out when the Bulls, after trailing by as many as 19 points, outscored the Celtics by 39-11 in the fourth quarter of a 14-point win. Afterward, Smart called out Brown and Tatum in a news conference. It is no secret, Smart said at the time, that opponents are keying their defenses on those two players, especially in late-game situations. The problem?

“They don’t want to pass the ball,” Smart said.

Brown and Tatum were not thrilled that Smart went public with his observations. A players-only meeting ensued, which is seldom a good sign. Except the Celtics subsequently won two in a row before closing out a three-game road trip with a narrow loss to the Dallas Mavericks on Saturday — a game that Brown missed with a hamstring injury. Still, on Wednesday morning, Brown expressed a feeling that had been in short supply: optimism.

“The spirit of this team is different,” he said, “and we’re going to continue to just keep pushing. I can feel it. I think that things will turn around for sure.”

Udoka, too, said before Wednesday’s game that his team was finding its identity, a bit of coach-speak that would have had a short shelf life with another uneven performance.

But in their rematch with the Raptors, the Celtics ran out to a 16-point lead by halftime and cruised. They did it without Brown, who was sidelined again, and without a proficient shooting night from Tatum, who was 8 of 24 from the field but finished with 22 points, 12 rebounds and 7 assists. All five starters scored at least 10 points, and Richardson had 15 points off the bench.

Robert Williams III, the team’s starting center, said Boston had been building more cohesion thanks to a flurry of team dinners organized by the veterans and a greater emphasis on communication at practice.

“I feel like we’re bonding, finding stuff out about each other,” he said.

The Celtics have made seven straight postseason appearances, including three trips to the Eastern Conference finals, most recently in 2020. But after the team scuffled to a 36-36 record last season and lost to the Nets in the first round of the playoffs, Brad Stevens vacated his coaching job to move to the front office and was replaced on the bench by Udoka.

And while the Celtics have been a perennial playoff team, their roster has not exactly been static. They have, for example, cycled through a colorful cast of starting point guards: Isaiah Thomas, Kyrie Irving, Kemba Walker. This season, Smart has been manning the point, with Dennis Schroder — one of the team’s big off-season signings — also supplying heavy minutes.

The team’s rotations remain a work in progress for Udoka, who must have known there would be growing pains but has been willing to make changes on the fly. Consider that he appeared determined, at least at the start of the season, to have his defenders switch on screens. He has since become more flexible depending on matchups.

“We’re mixing up some coverages,” he said. “We found out what the guys do better than we did in the preseason, and I think, as coaches, we’ve learned as well.”

As for Smart, he seemed to have little interest in rehashing his comments about Tatum and Brown after Wednesday’s win. When asked about the players-only meeting and what the past few days had been like for him, he said, “We had a great game.”

In the end, perhaps that is all that matters.