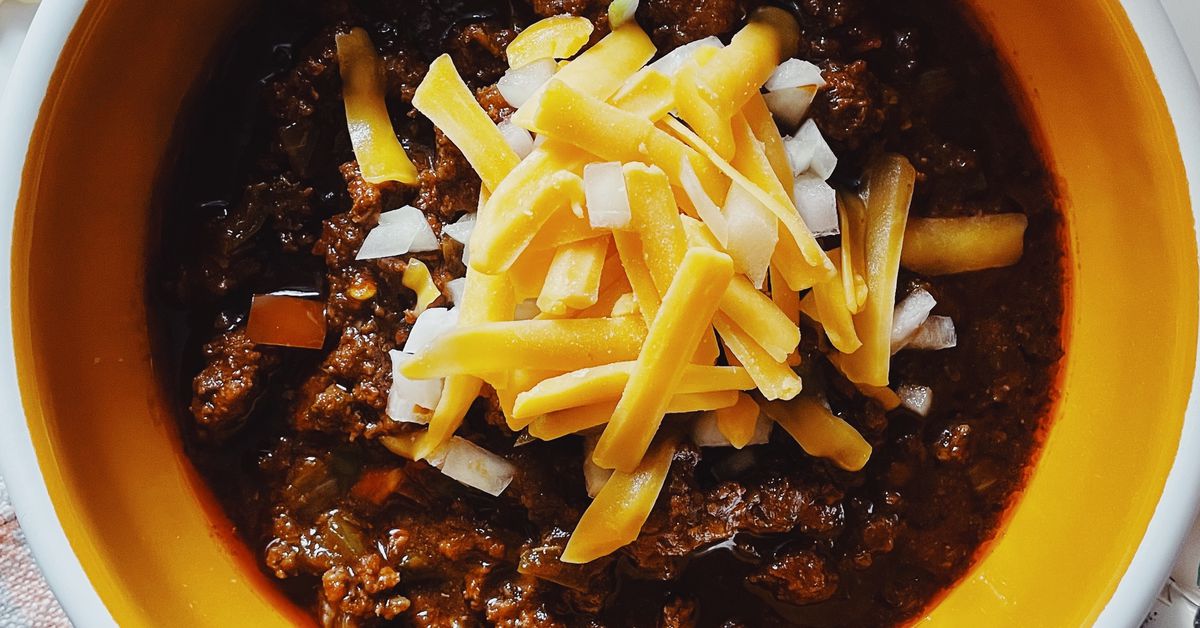 Welp, the end of Daylight Savings is here again, thrusting folks in the U.S. into the annual tradition of lamenting both the morning and evening darkness, day after day, for literal months. But with that comes the official start of cozy soup and stew season, aka anything you can leave simmering on the stove or throw in an Instant Pot that will have you feeling warm and full by dinner. That said: It’s time for chili, and here now are a half-dozen of the Eater crew’s favorite chili recipes:

When I tell you I have never made another chili recipe in my life, Sunny Anderson’s interstate chili is why. I’ve become a loyalist: It’s hot, smoky, and full of complex, nuanced flavors layered throughout. Chili can fall very easily into one-note, bland territory, but I really credit the addition of chorizo here with bringing Sunny’s recipe to life: It adds something special to the mix that pairs perfectly with the spices. The Food Network comment section has folks debating whether the recipe calls for too much cinnamon, but I can assure you, the cinnamon level is real and it is spectacular. I’ve got a whole batch of this sitting in my fridge as we speak: It pairs well with crunchy soup crackers and a cozy post-chili nap. — Stefania Orrù, supervising producer

I do not come from any locations or cultures that have hard opinions on chili, but I have always been a big fan of cooking that involves a big pot of stuff. I also, frequently, have no idea what I’m making for dinner until I realize it’s 4 p.m., which means vegan chili is usually what I end up with. This version involves stuff I tend to always have in my kitchen — cans of tomatoes, cans of black beans, some sweet potatoes that I have forgotten to roast. It’s an easy recipe to adapt, too. I end up using some form of stock or sometimes beer in place of the water, and since I’m not vegan, top it with cheese or sour cream if I have it. But it’s a reliable, hearty bowl for when I have forgotten to plan ahead. — Jaya Saxena, senior staff writer

Even though some might think it is barbecue, the actual official dish of Texas is chili: there’s classic “Texas red” and chili con carne, the latter of which is ubiquitous in Tex-Mex cuisine. Slathered over enchiladas or piled on top of crunchy Fritos with shredded cheese and sour cream, Texas food historian Robb Walsh’s chili con carne recipe is deep in flavor without being too complicated to make. It’s best with the three different types of meat called for in the recipe — especially if the venison was gifted to you fresh from a hunter — but a nicely marbled hunk of chuck roast will do just fine. Do not, however, skip Walsh’s instructions for homemade ancho chili powder — it’s absolutely essential. — Amy McCarthy, staff writer

This chili came into my life when my husband contributed to a family chili cook-off (I’ve since made it myself a few times). Though I haven’t ever successfully found the titular pork cheeks to use (pork shoulder works fine as a substitute), I like this as an alternative to traditional chili recipes: I almost think of it more as a pork and bean stew. It’s pleasantly smoky, and has a lot of texture to it. And the Cleveland native in me always likes to show a little love for a recipe from a hometown chef, pork evangelist Michael Symon. — Missy Fredrick, cities manager

I love this Nom Nom Paleo recipe as a base for chili: I swap in either ground bison or ground lamb, and use frozen fajita blend instead of chopping up the veggies. Then I make the dish decidedly non-paleo by adding a drained can each of black beans, kidney beans, and garbanzo beans. Take away my Texas card, but I love beans in my chili. The result is a nicely textured chili (thanks to the beans) with a thick, rich, silky broth, perfect for making chili pies. — Brittanie Shey, Eater Dallas and Eater Houston associate editor

As someone who a) doesn’t eat meat and b) has a fractious gastrointestinal relationship with beans, I have never exactly craved chili, no matter how much I love the idea of a big, steaming pot of the stuff on a cold day. That said, I have developed real feelings for this recipe that my boyfriend introduced me to not long after we began dating. Its simplicity belied what little I’d been taught about chili, namely that it typically involves no less than 45 ingredients, at least one of which has to be a wild card like a can of Coke. This is just onions, peppers, beans, chili powder, and a little bit of brown sugar — and the Impossible ground meat that we substitute for the turkey the recipe calls for. Our favorite way to eat it is to make big heaping bowls that we top with crushed tortilla chips and obscene amounts of Cholula. As the temperatures drop I find myself looking forward to its warm embrace. — Rebecca Flint Marx, Eater senior editor