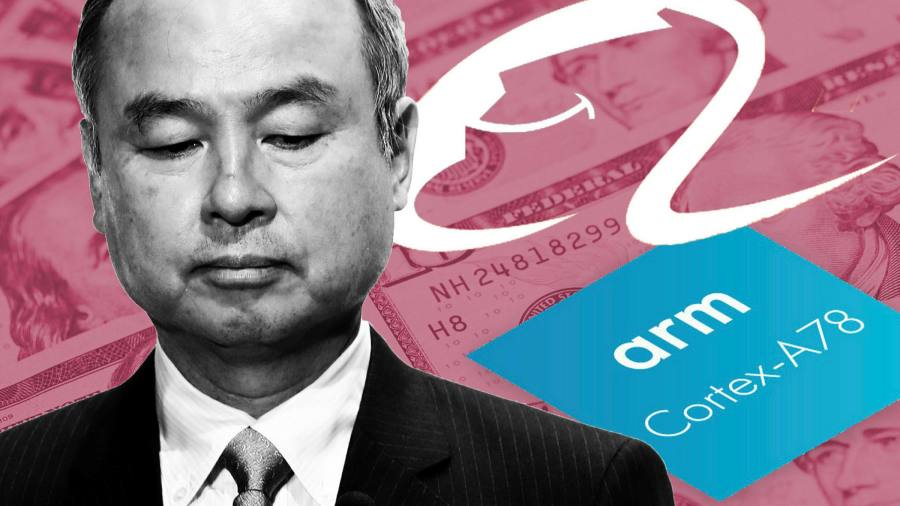 Masayoshi Son was uncharacteristically subdued when he revealed on Thursday that the Vision Fund lost $27bn from its investments last business year.

He abstained from tongue-in-cheek slides depicting SoftBank geese laying the golden eggs of the AI revolution or a unicorn with wings flying over the “Valley of Coronavirus”. He did not compare himself to Jesus Christ.

Instead, he began his presentation with a huge Chinese character painted in white against a deep blue backdrop: mamori. To “defend” or “protect”, mamori heralds a dramatic shift in the billionaire founder’s aggressive high-risk strategy.

“We put up an umbrella when it rains,” said Son. “It is the time to strengthen our defence now.”

Son has gone on the defensive before. Two years ago he promised to cut back on outsized cheques to companies after a previous record loss driven by bets that soured in market turmoil triggered by the Covid-19 disruption.

But the rebound was quick. He used an emergency $41bn asset sale to fund the largest share buyback in Japanese history and reduced SoftBank’s net debt by $14bn.

Investors and analysts say the difference between then and now is that SoftBank’s fortunes are not so easily reversible and a swift recovery is far from guaranteed, raising fundamental questions about Son’s path forward.

Monetary stimulus during the pandemic that fuelled high-growth, unprofitable tech companies around the world is coming to an end at the same time Russia’s invasion of Ukraine is stoking market volatility.

An expected rise in US interest rates designed to control inflation has triggered a massive sell-off in speculative assets, while Beijing’s crackdown on tech has sent shares tumbling. SoftBank’s stake in Alibaba, which represents 22 per cent of its net asset value, means Son is especially vulnerable to China’s regulatory assault.

The risk was magnified in mid-March when shares in Jack Ma’s company dropped to $73, the lowest level since 2016. On that day, SoftBank came “insanely close” to a $6bn margin call on the loan borrowed against Alibaba’s shares, according to one person familiar with the situation.

Chinese regulators quickly worked to reassure markets, but it was a nerve-shredding moment for investors. “I think it was lights out if it wasn’t for China doing what they did,” a person close to Son said, referring to the reassurance.

“We do not comment on individual financing details,” said SoftBank. “The balance of margin loans is $6bn, which is not a concern considering its proportion within our group’s total asset-backed financing, as well as liquidity on hand (¥2.9tn as of March 2022),” said the company.

Publicly listed companies in the Vision Fund are on average down 62 per cent from their listings. Of 24 IPOs in 2021, only three have gained in price since trading started, said Kirk Boodry, a tech analyst at Redex Research in Tokyo.

Son appears to be running out of options to restore investor confidence, with share buybacks becoming less effective in preventing a further slide in SoftBank’s share price.

The ¥1tn ($7.8bn) repurchase programme announced last autumn not only failed to stem the 40 per cent fall in the shares over the past year, but it has “concentrated systemic risks and destroyed value”, said Amir Anvarzadeh at Asymmetric Advisors.

The group could also sell down its stakes in Chinese ecommerce giant Alibaba or its Japanese telecoms unit, SoftBank Corp, but the divestitures would mean Son would not be able to borrow against these shares to fund fresh investments.

The telecoms business is also highly profitable and generates steady cash for the group, notes one long-term SoftBank shareholder. Selling Alibaba shares at less than a third of their peak value in October 2020 would be painful for Son too.

“It’s difficult to say how long this will last,” said a person close to the Vision Fund. “The factors are very different [to the Covid-19 crisis].”

Son was hopeful about listing Arm, the UK chip designer SoftBank bought for $31bn in 2016.

SoftBank plans to take the company public after its sale to Nvidia collapsed over regulatory hurdles. It has already secured billions of dollars in loans borrowed from banks involved in the listing against Arm’s shares.

While SoftBank sunk to its biggest ever loss, Arm reported record annual revenue of $2.7bn, up 35 per cent from the previous year. Its licensing business revenue grew by close to two-thirds with royalties increasing by a fifth to $1.5bn, surprising some analysts after years of meagre performance.

“When I look at what we’ve achieved in the past year, I really see the validation of the strategy that we put in place three or four years ago coming to life,” chief executive Rene Haas told the Financial Times.

But Son has had to dial back his expectations on Arm too, with his targeted valuation of $66bn now in doubt with rising interest rates and changing investor attitudes casting a chill on listings.

“All I can say is we’re preparing,” said Haas when asked if the IPO will be postponed.

“I don’t think Arm will raise anywhere as much as hoped . . . this is a busted flush but one all investment banks have big incentive to prop up and support and lend to given the IPO fee,” said Anvarzadeh.

SoftBank’s shares rose 12 per cent the day after Son’s presentation, but Boodry said that the optimism could be premature.

“It looks like some people think that because there was a record loss, things have somehow been reset — we don’t think so,” said Boodry, “we think there’s a reason to be worried.”