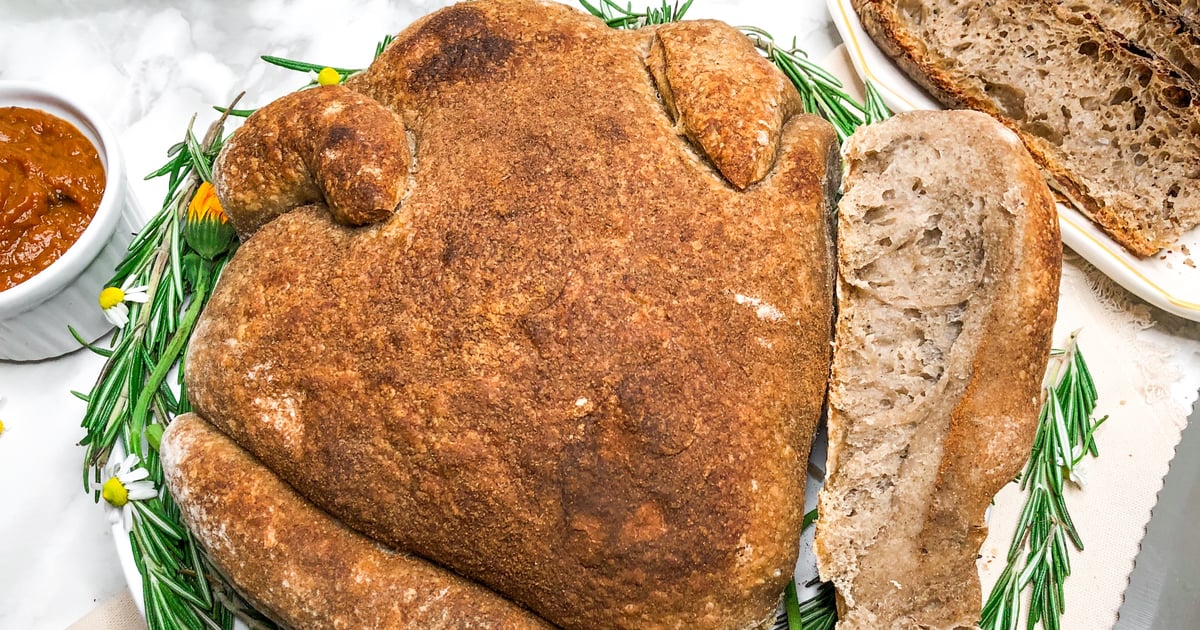 As a novice baker, the only thing I love more than achieving a wider crumb on the inside of every new homemade sourdough loaf is mastering a fun new technique for how to make the crusty bread look just as appealing on the outside. Don’t get me wrong, the traditional method of scoring a sourdough loaf while in its final stage of proofing does create a stunning “ear” at the top of the dough if done correctly, and there are many beautiful patterns one could carve with a sharp razor or “lame” (pronounced “lah-mm”) into the sides of a loaf before it goes into the oven, but my favorite way to get creative with my sourdough is to change the shape of each loaf entirely, according to the season.

My first attempt at completely changing the shape of a prebaked sourdough loaf was a pumpkin-shaped bread inspired by TikTok user @cottageloaves‘ viral tutorial, and the results were just as adorable as they were delicious. After successfully making my first pumpkin loaf, I accepted that I’d probably be making a lot more later in the year as edible decor for my Thanksgiving dinner table, but a new holiday-themed loaf shape was recently uploaded by the same TikTok user who shared the sourdough pumpkins, and it is somehow even more on theme for Thanksgiving than even the pumpkins were.

This “turkey bread” by @cottageloaves, or sourdough bread shaped like a roasted Thanksgiving turkey, has officially become the new staple centerpiece in all of my Thanksgiving tablescapes to come.

♬ You’re as Pretty as a Picture – Al Bowlly

To make this turkey bread, I used my own pumpkin spice sourdough recipe for the base dough, then implemented the steps shared by @cottageloaves to carve the dough into a turkey just after its final proof, or right before placing it in the oven. You can use your own trusted sourdough recipe, too, but I would highly encourage you to add a few teaspoons of pumpkin pie spice if you’re going with an unflavored dough for a darker finish and a warmer, fall flavor in your bread. A little extra pumpkin pie spice sprinkled on the exterior of your dough right before it goes into the oven will also give the finished turkey bread a true “roasted” look. Also, the more structure the dough has, the easier it will be to carve it into a turkey shape, so make sure to do at least three “stretch and folds” with 60-minute rests in between until the dough is strong enough to keep its shape.

This recipe makes 2 loaves, which is helpful when it comes to attempting the turkey shape for the first time, but you can always scale it in half for just 1 turkey loaf.