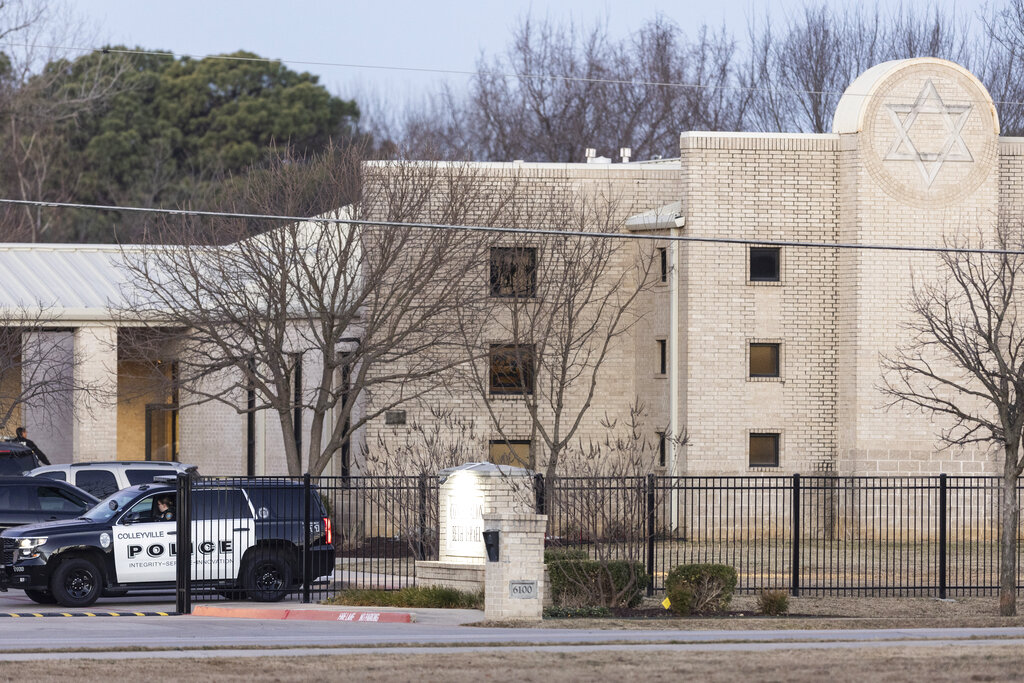 COLLEYVILLE, Texas (NewsNation Now) — Authorities Sunday identified a 44-year-old British national as the man who took four people hostage at a Texas synagogue for 10 hours, while police in England said they had detained two teenagers for questioning in the investigation.

Malik Faisal Akram was shot and killed after the last of the hostages got out at around 9 p.m. Saturday at Congregation Beth Israel near Fort Worth.

On Sunday, the Greater Manchester Police issued a statement saying officers from Counter Terror Policing North West “have made two arrests in relation to the incident” in Texas, adding that the two teenagers detained “remain in custody for questioning.”

Akram could be heard ranting on a Facebook livestream of the services and demanding the release of Aafia Siddiqui, a Pakistani neuroscientist suspected of having ties to al-Qaida who was convicted of trying to kill U.S. Army officers in Afghanistan. The FBI and police spokeswomen declined to answer questions Saturday night about who shot Akram when the standoff ended.

Video from Dallas TV station WFAA showed people running out a door of the synagogue, and then a man holding a gun opening the same door just seconds later before he turned around and closed it. Moments later, several rounds of gunfire could be heard, followed by the sound of an explosion.

Federal investigators believe Akram purchased the handgun used in the hostage-taking in a private sale, according to a person familiar with the matter who spoke on condition of anonymity because the investigation is ongoing. Akram arrived in the U.S. at John F. Kennedy International Airport in New York about two weeks ago, a law enforcement official said.

“Rest assured, we are focused,” President Joe Biden said during a visit to a food pantry in Philadelphia on Sunday morning. “The attorney general is focused and making sure that we deal with these kinds of acts.”

FBI Special Agent in Charge Matt DeSarno said the hostage-taker was specifically focused on an issue not directly connected to the Jewish community. It wasn’t clear why Akram chose the synagogue, though the prison where Saddiqui is serving her sentence is in Fort Worth.

Akram arrived in the U.S. recently on a tourist visa from Great Britain, according to a U.S. official who spoke on condition of anonymity because the information was not intended to be public. London’s Metropolitan Police said in a statement that its counter-terrorism police were liaising with U.S. authorities about the incident.

Saturday’s services were being livestreamed on the synagogue’s Facebook page for a time. The Fort Worth Star-Telegram reported that an angry man could be heard ranting and talking about religion at times during the livestream, which didn’t show what was happening inside the synagogue.

Shortly before 2 p.m., the man said, “You got to do something. I don’t want to see this guy dead.” Moments later, the feed cut out. A spokesperson for Meta Platforms Inc., the corporate successor to Facebook Inc., later confirmed that Facebook had removed the video.

Akram used his phone during the course of negotiations to communicate with people other than law enforcement, according to a law enforcement official who was not authorized to discuss an ongoing investigation by name and spoke on condition of anonymity.

Authorities said police were first called to the synagogue around 11 a.m. and people were evacuated from the surrounding neighborhood soon afterward.

Multiple people heard the hostage-taker refer to Siddiqui as his “sister” on the livestream. But John Floyd, board chair for the Houston chapter of the Council on American-Islamic Relations — the nation’s largest Muslim advocacy group — said Siddiqui’s brother, Mohammad Siddiqui, was not involved.

“We want the assailant to know that his actions are wicked and directly undermine those of us who are seeking justice for Dr. Aafia,” said Floyd, who also is legal counsel for Mohammad Siddiqui.

Texas resident Victoria Francis told the AP that she watched about an hour of the livestream before it cut out. She said she heard the man rant against America and claim he had a bomb.

“He was just all over the map. He was pretty irritated and the more irritated he got, he’d make more threats, like, ‘I’m the guy with the bomb. If you make a mistake, this is all on you.’ And he’d laugh at that,” she said. “He was clearly in extreme distress.”

Francis, who grew up near Colleyville, tuned in after she read about the hostage situation. She said it sounded like the man was talking to the police department on the phone, with the rabbi and another person trying to help with the negotiations.

Colleyville, a community of about 26,000 people, is about 15 miles northeast of Fort Worth. The synagogue is nestled among large houses in a leafy residential neighborhood that includes several churches, a middle and elementary school and a horse farm.

Congregation Beth Israel is led by Rabbi Charlie Cytron-Walker, who has been there since 2006 as the synagogue’s first full-time rabbi. He has worked to bring a sense of spirituality, compassion and learning to the community, according to his biography on the temple’s website, and he loves welcoming everyone, including LGBT people, into the congregation.

NewsNation reached out to Cytron-Walker for a comment, but we have not heard back.

In a Sunday morning post on what appears to be Cytron-Walker’s Facebook page, the rabbi thanked law enforcement and first-responders, and security training “that helped save us.”

Anna Salton Eisen, a founder and former president of the synagogue, said the congregation has about 140 members and that Cytron-Walker has worked hard to build interfaith relationships in the community, including doing pulpit swaps and participating in a community peace walk. She described Saturday’s events as “surreal.”

“This is unlike anything we’ve ever experienced. You know, it’s a small town and it’s a small congregation,” Eisen said as the hostage situation was ongoing. “No matter how it turns out, it’s hard to fathom how we will all be changed by this, because surely we will be.”

“There is more we will learn in the days ahead about the motivations of the hostage taker. But let me be clear to anyone who intends to spread hate — we will stand against anti-Semitism and against the rise of extremism in this country,” Biden said.

Israeli Prime Minister Naftali Bennett said on Twitter that he had been monitoring the situation closely. “This event is a stark reminder that antisemitism is still alive and we must continue to fight it worldwide,” he wrote. He said he was “relieved and thankful” that the hostages were rescued.

The standoff prompted increased security in other places, including New York City, where police said that they increased their presence “at key Jewish institutions” out of an abundance of caution.

Aafia Siddiqui earned advanced degrees from Brandeis University and the Massachusetts Institute of Technology before she was sentenced in 2010 to 86 years in prison on charges that she assaulted and shot at U.S. Army officers after being detained in Afghanistan two years earlier. The punishment sparked outrage in Pakistan among political leaders and her supporters, who viewed her as victimized by the American criminal justice system.

In the years since, Pakistani officials have expressed interest publicly in any sort of deal or swap that could result in her release from U.S. custody, and her case has continued to draw attention from supporters. In 2018, for instance, an Ohio man who prosecutors say planned to fly to Texas and attack the prison where Siddiqui is being held in an attempt to free her was sentenced to 22 years in prison.

The Associated Press and Reuters contributed to this report.