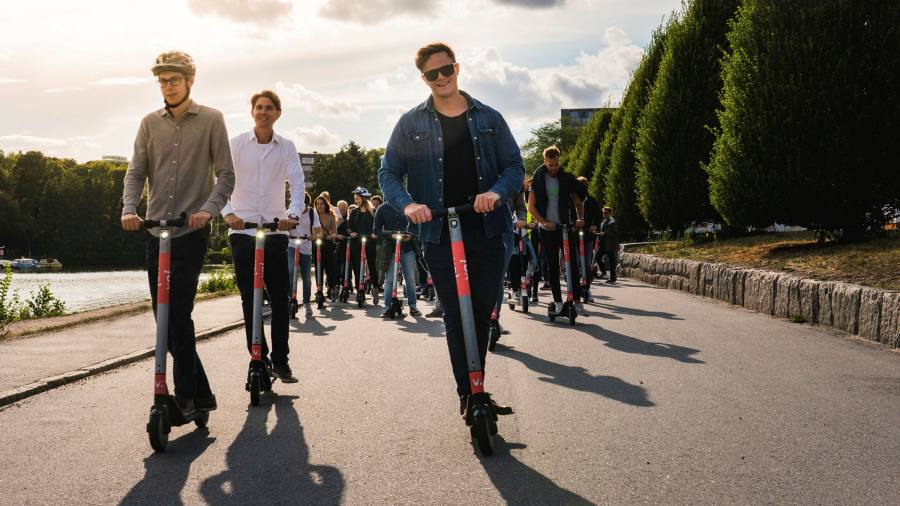 Swedish mobility start-up Voi Technology has announced plans to go public in 2022, as its US rivals list and competition for UK e-scooter trials causes consolidation in the market.

Voi operates in 18 cities in the UK, including Liverpool, Bristol and Cambridge, and claims it has almost 70 per cent share of the British market. The company also operates across Europe.

Fredrik Hjelm, founder and chief executive, told the Financial Times it is still considering where to list but said it will probably be in Europe. “We’ve started preparations to be able to go public and we will be ready in 2022,” he said. Voi said its revenues grew 140 per cent year-on-year in 2021 to “more than $100m”.

The company announced that it had raised $115m in its latest Series D round, led by Raine Group and VNV Global, at a valuation of more than $1bn. Voi has raised $430m since it was founded in 2018.

The new funding will be invested into further expansion in Europe, including Ireland and the Netherlands, and introducing new vehicle types such as e-bikes to its services.

But the start-up missed out on a licence to take part in e-scooter trials in London this year. Its rivals Lime, Tier and Dott are currently available in the capital. Voi said it would bid for a future license, but Hjelm said the applications must cater specifically to individual boroughs.

“The big cities have a lot of bureaucracy which makes it more tricky to run the service in a really good way [but] London is one of the more complicated ones,” he added.

Hjelm said Voi was looking at opportunities for acquisition in the market and added that having fewer companies bidding for licenses in trials was “better for everyone”.

Last year, there was a surge of mobility companies entering the market as demand for alternatives to public transport increased owing to the pandemic.

“Micromobility is quite high in demand during lockdowns and restrictions [where] people want that socially distant way of travelling,” he said. “Of course we want Omicron and Covid to be over as soon as possible but what we saw throughout the last year and a half is that micromobility is doing really well.”

Its e-scooters have recently come under scrutiny after the scooter’s lithium battery began burning in one home in Bristol. Hjelm said he was moving to put more battery development in-house to have control over the product.

“We need to continue to put safety first . . . transportation will always [carry] a certain degree of risk, but we need to minimise that,” he added.