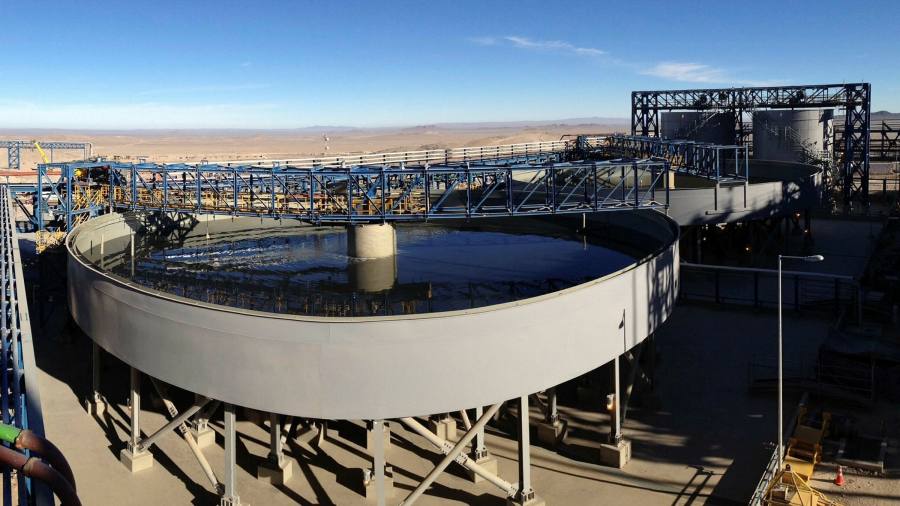 South32 has emerged as the frontrunner to buy a 45 per cent stake in a large Chilean copper project, as the world’s biggest miners seek to secure more supplies of the metal.

The Perth-based company could pay as much as $2bn for the stake in the Sierra Gorda project, according to people with knowledge of the sale process who said there was no certainty a deal would be reached or that another bidder might emerge. South32 declined to comment.

If a deal is concluded it would give South32 a foothold in the world’s largest copper-producing country ahead of an expected boom in demand for the metal, used in everything from household appliances to electric vehicles.

Big miners are trying to increase their exposure to metals including copper, nickel and cobalt that will be needed in the switch to cleaner forms of energy.

However, with big deposits in mining-friendly jurisdictions becoming more difficult to find they are looking at acquisitions as a way to boost their production of these “future-facing commodities”.

Sumitomo Metal Mining put its stake in Sierra Gorda on the block a year ago. KGHM, a state-backed Polish miner, owns the rest of the project and operates the mine, which last year produced almost 150,000 tonnes of copper concentrate.

The open-pit mine is located in the Atacama Desert in northern Chile, about 60km south-west of the city of Calama. It sits at an altitude of 1,700 metres and the deposit has enough ore to support more than 20 years of mining.

Analysts and investors thought Glencore, the Swiss miner and commodity trader, was the most likely buyer of the stake because it could have used production from Sierra Gorda to feed its nearby Altonorte smelter.

If a deal is concluded it will be the second-biggest acquisition by South32 since it was listed in 2015 after being spun out of BHP, the world’s largest miner.

In 2018 the company, which is led by former BHP executive Graham Kerr, paid $1.3bn in cash for 83 per cent of Arizona Mining, a zinc, lead and silver miner.

The deal comes amid continued political uncertainty in Chile, which is due to hold an election in November and rewrite its Pinochet-era constitution next year following a referendum in 2020.

Lawmakers are also discussing a bill to increase taxes on mining companies as well as one to limit mining near the country’s glaciers. More than $20bn in mining projects are still awaiting government permits in the country, out of a total of $74bn of planned mining investment.

“We’ve seen from companies we’ve spoken with that there is interest in investing in Chile,” he told the Financial Times on Tuesday. “Chile still has over 40 per cent of the world’s copper reserves — and all the infrastructure that allows Chile to be the best country to invest in copper.”

Copper prices have risen 21 per cent this year and hit a 10-year high above $10,000 a tonne in April, as analysts expect the metal to be a beneficiary of efforts to decarbonise the global economy.

Shares in South32 have hit a two-year high on the back of surging prices for one of its key commodities, aluminium, which reached a 13-year high this week.