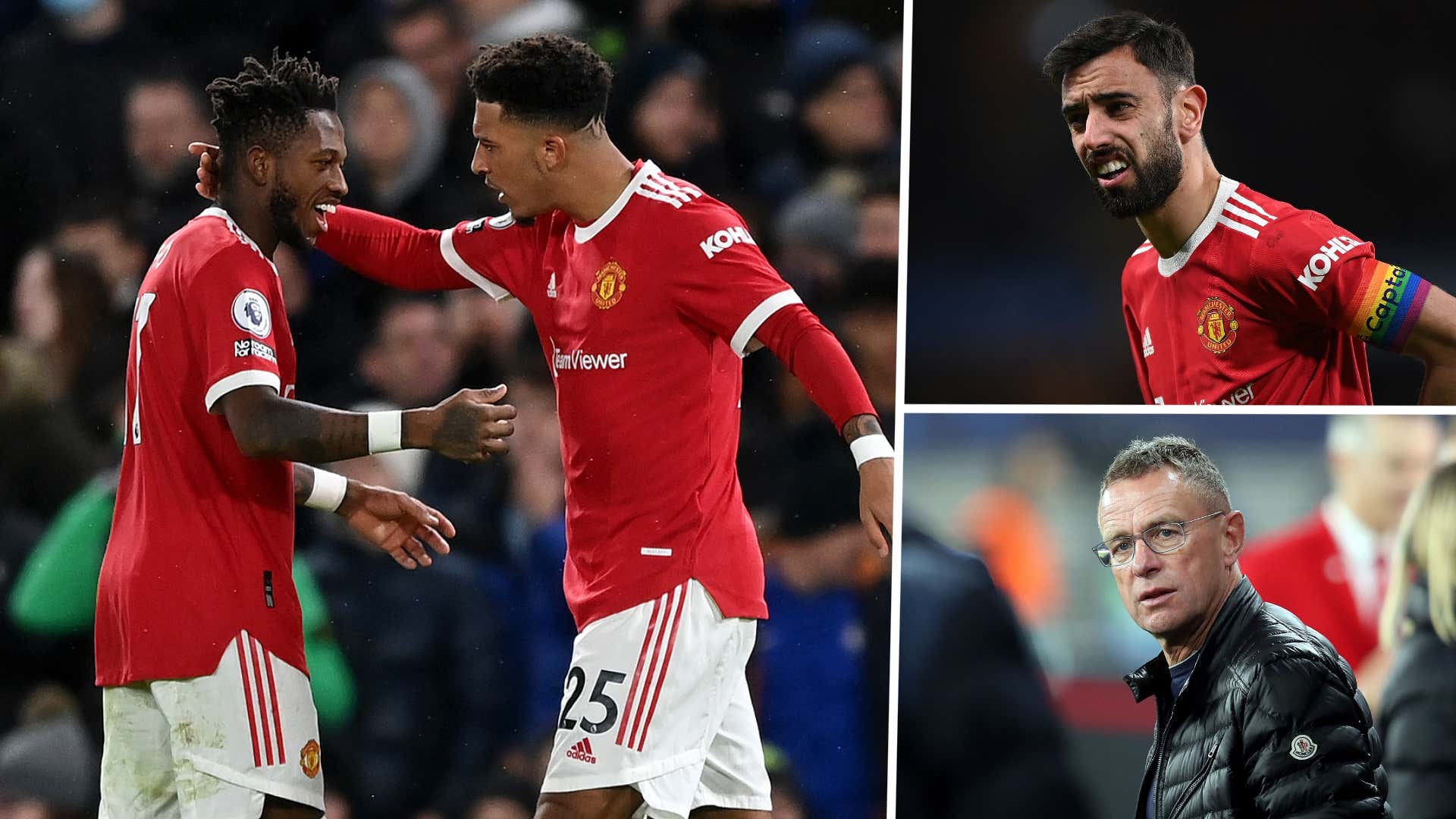 When Ralf Rangnick eventually gets his hands on this Manchester United side, they will be in a better place than they were a week ago.

Michael Carrick has overseen two positive results, and though the football has been uninspiring at times, there is no doubt that morale will have improved at Old Trafford.

There has been no tactical revolution from Carrick, who admitted himself that his ideas are very similar to those of Ole Gunnar Solskjaer’s, but there is not doubt that Rangnick will come in with his own ideas for what will and will not work when it comes to fitting these United players into his system.

So what will he have learned from Sunday’s 1-1 draw with Chelsea at Stamford Bridge? Goal breaks it down:

As Jadon Sancho calmly finished past Edouard Mendy for United’s opener in west London, he sprinted to celebrate with the away fans in the Shed End, banging his hands on the netting keeping the supporters off the pitch.

A moment of relief for the England international? His first Premier League goal, and an important one at that.

Of course, United scored on the counterattack. The negative way in which they had set up at Stamford Bridge, playing with three pretty defensive midfielders and without a recognised central striker, meant that was pretty much their only option.

So when Jorginho misjudged Bruno Fernandes’ clearance and Sancho found himself through on goal, Carrick could have been forgiven for believing that his plan was coming together.

For Sancho, given the pressure he has been under after his slow start to his life at United, he would have been forgiven for fluffing his lines.

Instead he produced cool feint and a calm finish to beat Mendy, making it two goals in as many games for the ex-Borussia Dortmund man as he finally looks to found some confidence just as the new manager is set to arrive.

Expect Rangnick to build his attack around a player who knows how to press effectively from his time in Germany.

Fernandes and Ronaldo a cause for concern

As the final whistle blew, Cristiano Ronaldo walked straight down the tunnel.

No handshakes, no acknowledgement of the fans and no pats on the back for his team-mates.

It is becoming a trademark display from the Portugal international, likely borne out of frustration that Carrick had decided not to start him in such a huge fixture.

MORE: Why was Ronaldo benched vs. Chelsea?

Carrick insisted that there was “no drama” in leaving Ronaldo out, but every decision that involves the 36-year-old brings about huge scrutiny, and such calls are something he might have to get used to.

Many are wondering how Ronaldo will fit into what is expected to be a high-intensity pressing game when Rangnick arrives; one that does not suit the five-time Ballon d’Or winner’s style, and there were even some — including Gary Neville — who pondered whether the decision to leave Ronaldo out might have been made by Rangnick himself.

Everyone has seen the impact Ronaldo can make on games this season, but one thing he is not is a team player. He is an individual who can provide moments of brilliance and that does not, on the face of it, fit with the style Rangnick will want to impose on this team.

Ronaldo was not the only Portuguese player to leave Stamford Bridge frustrated, either, as Fernandes’ return to the lineup did go to plan for the stand-in captain.

He did little to vindicate his selection, giving the ball away on a regular basis, and he too headed straight down the tunnel at full-time.

With Donny van de Beek pushing for selection and an array of wide attackers who might suit a 4-3-3 system at Rangnick’s disposal, could he be about to drop Fernandes AND Ronaldo? It might be the shock to the system this dressing room requires.

United may have had a good week in terms of results, but the performances and set-ups were nothing like what Red Devils supporters became used to under Sir Alex Ferguson.

With 15 minutes on the clock here, Chelsea had had 71 percent possession, and the only surprise is that that number was not higher.

Carrick started with three central defensive midfielders in Fred, Scott McTominay and Nemanja Matic, and as Thomas Tuchel’s side passed the ball around with precision and purpose, United were left chasing shadows.

Their pressing was an improvement from what has been seen in recent months under Solskjaer, but it still was not effective enough, and on another day Chelsea might have run out winners by multiple goals with better finishing.

This was an approach that focused on trying to shut out the hosts and then hit them on the counter; a plan that looked to have worked for them until Aaron Wan-Bissaka gave away a penalty for a foul on Thiago Silva, which Jorginho converted in the 69th minute.

Despite the results, the way Carrick has set United up this week is not sustainable. In the month of November they have mustered the fewest shots of any team in the Premier League, while conceding the most at the other end. This display did not suggest that those patterns are about to change.

“On the pitch, in the goal, I was feeling danger for nearly the whole game,” David de Gea told Sky Sports after the game. Again he was again called upon to bail United out; something that Rangnick too will be able to rely upon, though he will hope it does not come to that.

Carrick might be the one in the club suit tasked with managing the side at the moment, but it was Darren Fletcher, the club’s technical director, who was the most vocal on the touchline on Sunday.

It is not yet confirmed what the makeup of Rangnick’s backroom team will be when he arrives, but with Carrick, Mike Phelan and Kieran McKenna expected to stay, they should be involved in some capacity.

How that works, though, remains to be seen.

While Tuchel was the only one to patrol the Chelsea technical area, it was a roulette of personnel to his right. Fletcher, who had an ear piece in connecting him to an analyst in the stand, was up and down like a yo-yo, arguing with the fourth official over decisions and passing on instructions to the likes of Wan-Bissaka and Sancho regarding their positioning.

It was a common theme of Solskjaer’s tenure that up to five different staff members would be in and around the technical area passing on instructions, and one that has not left with the Norwegian.

Rangnick is likely to come in with his own ideas regarding in-game management, and it seems unlikely that will involve Fletcher yelling, “Are you winding me up?!” to the fourth official in the same way he did on Sunday.

A more streamlined approach will likely be more effective.