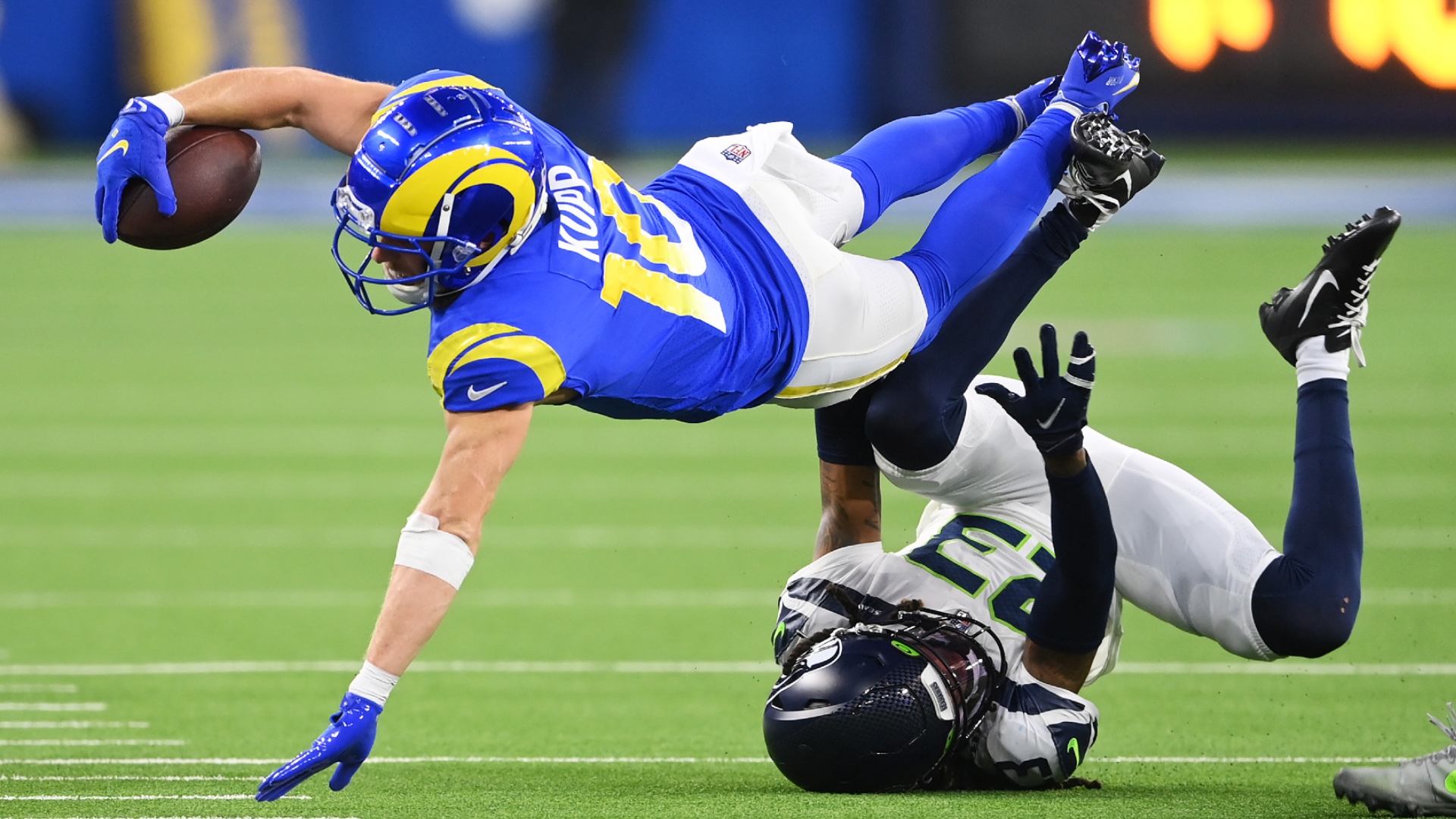 The Rams secured the tie with the Cardinals at the top of the NFC playoff standings after their 20-10 win against the Seahawks on Tuesday night.

Los Angeles got off to a slow start, only scoring a field goal in the first half. But thanks to two touchdowns from Cooper Kupp (now the franchise’s record-holder in single-season receptions), the Rams took the Week 15 win. Kupp finished with nine receptions for 136 yards and the two scores.

The Rams defense was able to hold the Seahawks to only 10 points. Von Miller also had his first official sack as a Ram after being activated off the reserve/COVID-19 list the morning of the game. Matthew Stafford finished with a quarterback rating of 106.1, his highest rating of the season so far. He completed 21 of 29 passes for 244 yards.

Russell Wilson finished with 17 completions out of 31 attempts for a total of 156 yards. His last throw in the game was an interception in the end zone, which officially ended the game.

Sporting News tracked live scoring updates and highlights from Rams vs. Seahawks on Tuesday night. Read below for complete results from the NFL Week 15 game:

9:56 p.m. — INTERCEPTION, RAMS. Taylor Rapp intercepts Wilson’s pass in the end zone to give the Rams the ball back with 45 seconds.

9:55 p.m. — Metcalf keeps the Seahawks alive after running 11 yards on third down. Fifty-seven seconds remain in the game.

9:43 p.m. — The Seahawks attempted a fourth-down play, but the throw is not caught. After the play, Dallas is penalized for unsportsmanlike conduct. 15 yards will be added to the Rams drive.

9:38 p.m. — The Rams go three-and-out. Around 6 minutes left in the game for the Seahawks to make a comeback.

9:28 p.m. — Jalen Ramsey was flagged for defensive pass interference, giving the Seahawks an automatic first down.

9:22 p.m. — The Rams get three first downs in a row, starting with a 6-yard run from Darrell Henderson. Van Jefferson catches a 10-yard pass, followed by an 11-yard catch by Kupp. The Rams are now at the Seahawks’ 29-yard line.

9:18 p.m. — Skowronek was 4 yards short of a first down for the Rams, but a defensive holding penalty on Austin gives the Rams the automatic first down.

9:11 p.m. — The Seahawks also go three-and-out. There hasn’t been a first down on the field in over four minutes.

8:55 p.m. — TOUCHDOWN, RAMS. Kupp catches a 6-yard pass and scores the touchdown on an impressive Rams drive to tie up the game. Rams 10, Seahawks 10.

8:37 p.m. — Penny gets the Seahawks a first down after running 6 yards. However, on the Seahawks’ first down, Damien Lewis was flagged for offensive holding, adding 10 yards to the Seahawks play.

8:19 p.m. — FIELD GOAL, SEAHAWKS. Jason Myers makes a 39-yard field goal attempt to put the Seahawks on the board before halftime. Seahawks 3, Rams 3.

8:12 p.m. — After the two-minute warning, the Rams attempted a fourth down, but Stafford’s pass is incomplete to Kupp. The Seahawks get the ball on their own 32-yard line.

7:55 p.m. — Rasheem Green sacks Stafford for a loss of 10 yards on third down. This ends the Rams drive on the Seahawks’ 41-yard line.

7:48 p.m. — The NFL’s lead receiver Kupp completed his first first down of the game after catching Stafford’s 9-yard pass.

7:41 p.m. — Von Miller sacks Russell Wilson for a loss of 9 yards on third down. This ends the Seahawks’ drive.

7:39 p.m. — Damien Lewis is flagged for offensive holding on the Seahawks’ first play. The Seahawks move to first-and-20.

7:22 p.m. — DeeJay Dallas gets taken down by Aaron Donald on third down, which ends the Seahawks drive.

7:14 p.m. — FIELD GOAL, RAMS. On the Rams’ punt, Seahawks’ Alton Robinson ran into the kicker, which set the Rams up for a 55-yard field goal attempt. Matt Gay made the field goal to put the Rams on the board. Rams 3, Seahawks 0.

7:12 p.m. — Another first down is called back due to an offensive penalty, this time on Bobby Evans for illegal formation. Then, on third-and-10, the Rams can’t get the first down.

7:10 p.m. — Sony Michel rushes 16 yards, but the play is deemed a no play after Austin Corbett was flagged for offensive holding. The Rams move to first-and-20.

7:07 p.m. — Odell Beckham Jr. completes the Rams’ first first down of the game after catching a 7-yard pass from Matthew Stafford.

What channel is Rams vs. Seahawks on?

Rams vs. Seahawks will be broadcast on Fox with announcers Chris Myers and Daryl Johnston broadcasting from the booth, and Jennifer Hale reporting from the sidelines.

You can also stream Rams vs. Seahawks live online with fuboTV, which offers a free seven-day trial .