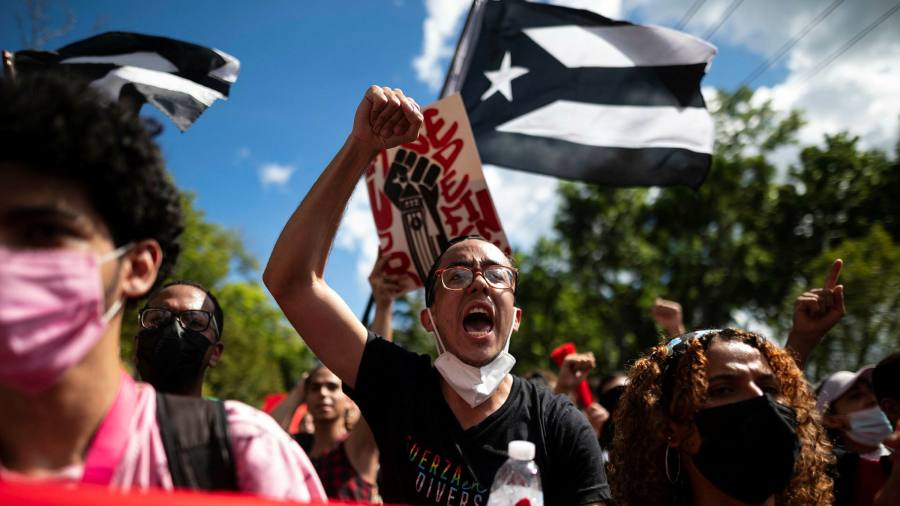 Puerto Rico’s five-year old bankruptcy was blundering to a conclusion in court this week. As is now customary in US courts, bondholders are being handed deep haircuts on their face value whilst pensions for retired public sector employees are left intact.

And as is the case with other restructurings, working employees face the burden of meeting those retirement costs, both broadly in economic costs and specific benefits.

Under the plan, currently working judges and teachers have their defined benefit pension rights frozen in place, and are now shifted to defined contribution plans.

Meanwhile, the island faces population loss and a contracting economy. This echoes what has happened elsewhere when governments become insolvent and the demographics spiral down.

The old age dependency burden on young and productive workers gives them a big incentive to move to countries with lower wage deductions to pay for pensions and national debt service.

In Puerto Rico’s case, the numbers are clouded by the complex structure of the territory’s outstanding debt, estimated at $70bn in 2015, and $49bn of unfunded pension liabilities.

The deal before the court will cut annual debt service from a (suspended) $3.9bn today to no more than $1.1bn. It will cut some of the $33bn of outstanding bonds to $7.4bn.

Some US bond investors will be attracted to the prospect of receiving US tax-free interest payments on those new bonds from the newly de-levered territory. But they will be hostages to hurricanes and the government’s $2.3bn in annual retirement costs. “Structural reforms” to the economy have little local support, and Congress long ago lost interest in Puerto Rico.

Whatever the detailed terms and initial interest rate of territory’s new bonds, buyers should remember that, when pushed to the wall, governments care about politics, not documentation. And while US law formally favours creditors, that is not how events have played out.

In the case of Detroit’s 2013 bankruptcy, unsecured bondholders took a 26 per cent haircut on their claims, while pensioners gave up no more than 4.5 per cent of their month payments and agreed to a voluntary restructuring of their health plan.

California’s state pension manager, Calpers, has refused to agree in municipal bankruptcies to any cuts in pensions that its funds manage. Bankrupt cities such as Stockton and Vallejo have defaulted on bonds, restructured health benefits and cut services, but Calpers-managed pensions are still intact.

Calpers’ obduracy has an influence on US investors even larger than its $469bn in assets. As the largest public pension fund in the US, it will always get the attention of its fellow state funds, as well asset managers and major corporations.

Still, basic law, documentation precedent and economics do not entirely explain the endurance of pensions over other claims. More fundamental, I believe, is the reality that creditors depend on officials who are pensioners themselves.

However, officials cannot extract pension or debt service payments from a people who are no longer there. The employment to population ratio for Puerto Rico peaked in 2006, and the US as a whole may have just reached that point.

Using figures from the OECD, a multilateral economic agency, the US working age population appears to have topped in May 2020 at 207.3m. This would suggest that future US growth will become more dependent on net immigration.

The EU is already in that position, although you might not think so given recent violent images of Belarus regime’s contrived border crisis, or the public’s reaction to the 2015 migrant surge. According to report issued this week by Scope Ratings, a Berlin sovereign rating agency, even today’s unpopular levels of migration are below those needed to maintain member countries’ future creditworthiness.

According to Alvise Lennkh, an analyst with Scope, “restrictions on migration are a huge problem and a huge mistake. We need elevated migration in Europe. That definitely influences our view on sovereign credit, and we cannot sustain our welfare without that migration.”

That “welfare”, according to Lennkh and his colleagues, includes pensions and old age care. “We are concerned that assumptions for the sustainability of state level pensions in Europe are highly optimistic.”

Scope Ratings’ analysis of Europe eerily recalls the 2011 sovereign Greek debt haircuts and 2015 IMF payment default. Even before the Greek sovereign defaults, cuts in pension payments to then-current retirees had begun in 2010 and became severe for most between 2012 and 2013. This had all been preceded by a decline in the working age population after 2008.

Yet the rest of Europe does not see this coming. Neither did Puerto Rico.