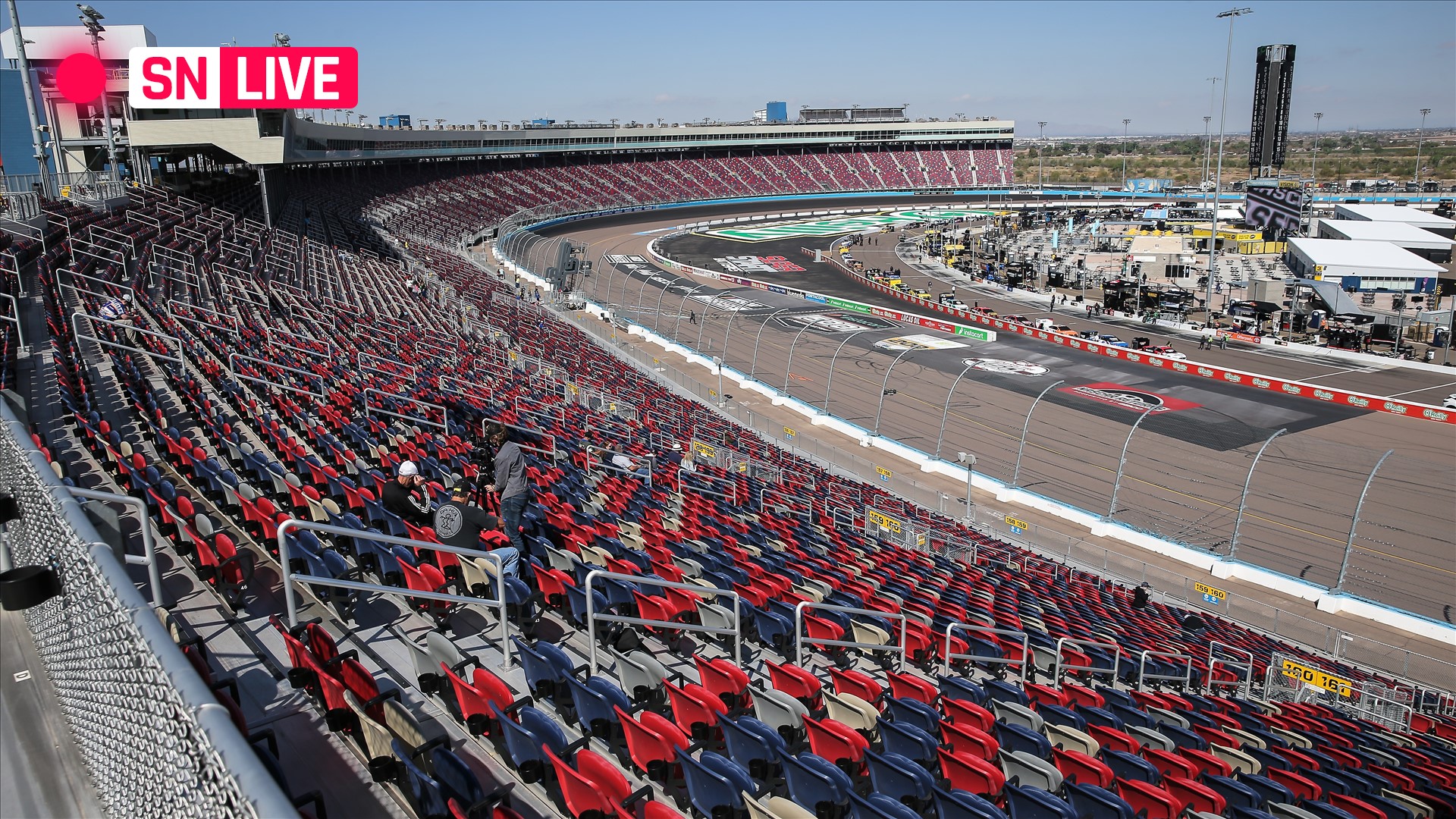 And then there were four.

The NASCAR Cup Series has reached the final stage of the season, with the Championship 4 set to kick off on Sunday at the Phoenix Raceway.

The four remaining are Kyle Larson, Martin Truex Jr., Chase Elliott and Denny Hamlin. Larson and Elliott are in the best position as they start in the No. 1 and 2 spots in the lineup, while Hamlin is at sixth and Truex begins in 12th. Of the drivers, Elliott and Truex are the only two looking to make it multiple titles. Elliott won last year, while Truex won back in 2017.

After reaching this point, each driver is now in the same position. All have 5,000 points, and the driver with the best finish on Sunday will be crowned the champion. There are no stage points, so this will be based purely on the outcome of the race.

Sporting News is tracking live updates and lap-by-lap highlights from NASCAR’s 2021 championship race on Sunday. Follow below for complete results for the winner-take-all Championship 4 finale at Phoenix.

6:16 p.m.: The green is back out with 58 laps remaining in the championship. Truex and Hamlin lead the field.

6:08 p.m.: Caution flag comes out, and this could be bad timing for Truex. Anthony Alfredo blows his right front tire and he hits the wall hard.

6:07 p.m.: Hamlin has been putting up some quick times, and he’s now passed Larson for second place.

6:02 p.m.: Elliott keeps trying to gain some space on Larson by cutting to the inside, and he’s starting to make up some ground. Elliott pulled ahead of him briefly with 77 laps to go before clearing Larson with 76 remaining.

5:54 p.m.: This is Larson’s race with 93 laps to go. He’s about a second up on Elliott, and neither Hamlin nor Truex are within three seconds of the lead.

5:47 p.m.: Truex and Hamlin are fighting for the third spot, but Larson and Elliott are now running out to a decent advantage.

5:45 p.m.: The final stage is underway. Elliott struggles on the restart, and Hamlin pulls up ahead of him briefly.

5:33 p.m.: With less than nine laps to go in the stage, Larson continues to lead Elliott in a tight race for first. Hamlin and Truex are running third and fourth.

5:26 p.m.: Elliott has been trying to ride close to the back corner of Larson and put some pressure on him.

5:25 p.m.: All four championship drivers are at the front with Larson, Elliott, Hamlin and Truex rounding out the top four.

5:23 p.m.: The top four drivers are Tyler Reddick, Kurt Busch, Alex Bowman and Daniel Suarez leading the pack on the restart. However, Larson and Elliott immediately pass all four to take the top-two spots.

5:22 p.m.: Truex has some trash on his grill, according to the broadcast, that he was unable to get off.

5:17 p.m.: Larson benefits from a quick stop on pit road, which moves him up to first. Elliott, Truex, Harvick and Hamlin round out the top five.

5:15 p.m.: Another crash, another caution. Chase Briscoe backs into the wall and it looks like his afternoon will be over as well. He gets a flat tire and hits the wall hard.

5:15 p.m.: Truex tries to pass Larson from the inside, but he hasn’t been able to clear him yet. Harvick is right behind him.

5:11 p.m.: There go the drivers on the restart, and Larson immediately starts to push for the lead. Elliott is out in front, but Larson quickly passes Harvick for the second spot.

5:10 p.m.: Stenhouse’s day is over after the crash. None of the leaders head to pit road.

5:04 p.m.: The drivers aren’t in green much longer as the race goes back under caution. Stenhouse loses a front-left tire and goes into the wall.

5:02 p.m.: The race has restarted, and Larson almost immediately passes Harvick to move into second.

4:56 p.m.: All the leaders will take the caution to pit. The fill up on fuel should be able to let them finish the race on fuel.

4:54 p.m.: Caution flags come out for a crash involving Quin Houff on Lap 54. Looks like the right front tire got blown out and he just drove straight into the wall.

4:53 p.m.: Truex takes advantage of some traffic as he carves through the field to put some distance between himself and Elliott for first place.

4:51 p.m.: Truex is back out in front as he’s able to get around Elliott for the top spot. Larson and Hamlin are in fourth and fifth.

4:45 p.m.: Elliott has built up a solid lead as he’s ahead of Truex by just over a second. Larson and Harvick have been battling for third, while Hamlin continues to ride fifth on Lap 35 of Stage 2.

4:38 p.m.: Battle going on for fourth as Harvick and Hamlin are going back and forth around Lap 20 of the stage. Both are about 2.5 seconds back of Elliott in first.

4:23 p.m.: Truex runs away with the Stage 1 win. Harvick, Elliott, Hamlin and Larson round out the top five.

4:20 p.m.: Hamlin moves up ahead of Larson for fourth overall, but both drivers are still well behind Truex for the lead. No driver is within three seconds of Truex.

4:17 p.m.: Blaney has dropped all the way down to sixth, as all the Championship 4 drivers are in the top five now. Truex is leading Harvick by nearly two seconds, and Hamlin, running fifth, is just over four seconds back.

4:12 p.m.: Now Truex has moved all the way up into first to get ahead of Harvick and Blaney with 24 laps left.

4:10 p.m.: The four are taking up spots three through six with 27 laps left in the stage. Truex, Elliott, Larson and Hamlin.

4:07 p.m.: Harvick has managerd to catch Blaney for the lead with Elliott not too far behind. Truex has also made some strides up the field as he’s now ahead of Larson, who is now in fifth, just a spot above Hamlin.

4:04 p.m.: Kevin Harvick is able to get out in front of Elliott, and he eventually moves up to second ahead of Larson. Ryan Blaney still leads the race with about a second-and-a-half advantage.

4:00 p.m.: Elliott tries to pass Larson from the inside, but he slips a little and has to catch himself before the two ended up in a crash. He moves behind Larson for third.

3:57 p.m.: There’s the restart as Ryan Blaney, Brad Keselowski and Ross Chastain start out in front. Larson doesn’t take long to move up to fourth, passing Michael McDowell from the inside.

3:53 p.m.: All the leaders take the chance to head to pit row, but Larson is staying out. He will be fifth on the restart.

3:51 p.m.: It takes just four more laps for the caution flag to come back out. LaJoie and Ricky Stenhouse Jr. bumped into one another when the cars went three wide, and LaJoie hits the wall. Stenhouse is able to stop before the wall and looks to be relatively clean.

3:49 p.m.: Elliott and William Byron take the front row as the race hits the restart on Lap 11.

3:45 p.m.: Larson is the only championship driver to take the chance to pit under caution. It appears Wallace’s afternoon is over after the crash.

3:44 p.m.: The caution flag is out as Bubba Wallace hits the wall. He gets hit on the back by the 7 of Corey LaJoie, leading to the crash.

3:41 p.m.: It doesn’t take long for Elliott to ride the inside and take the lead over Larson by Lap 2 of the race.

3:41 p.m.: There’s the green flag, and the championship is underway.

3:29 p.m.: The command has been given. Drivers are set to start this race.

3:25 p.m.: Kristin Chenoweth performed the national anthem before the race.

3:18 p.m.: Pre-race ceremony beginning with the singing of “God Bless America” ahead of the start of the championship race.

3:10 p.m.: Which of these four drivers will be coming away with that trophy?

The green flag for Sunday’s NASCAR Cup Series playoff race on Phoenix Raceway’s 1-mile track is scheduled to drop at 3:34 p.m. EST Sunday (1:34 p.m. MST). The track has lights, so the race can finish after sunset, which is set for 5:37 p.m. MST on Sunday.

Weather does not figure to be the cause of a delay. The National Weather Serivce’s forecast for Avondale, Ariz., where Phoenix Raceway is located, is for sunny skies and temperatures in the high 80s. Winds will be calm to light.

How does the NASCAR championship race work?

Each driver in the Championship 4 will begin the race with 5,000 points. The driver with the most points at the end of the race will be the Cup Series champion. There is one major difference between the first 35 races of the season and the championship race: Stage points will not be awarded to the Championship 4 drivers. That means the playoff drivers’ official finishing positions alone will determine who wins the championship. The best finisher among the four will be awarded the title.

Here is the complete starting lineup for Sunday’s Cup Series Championship race at Phoenix Raceway. Thirty-nine cars were entered for the race, one fewer than the number for a full field. Championship 4 drivers are denoted by a “P” next to their names.