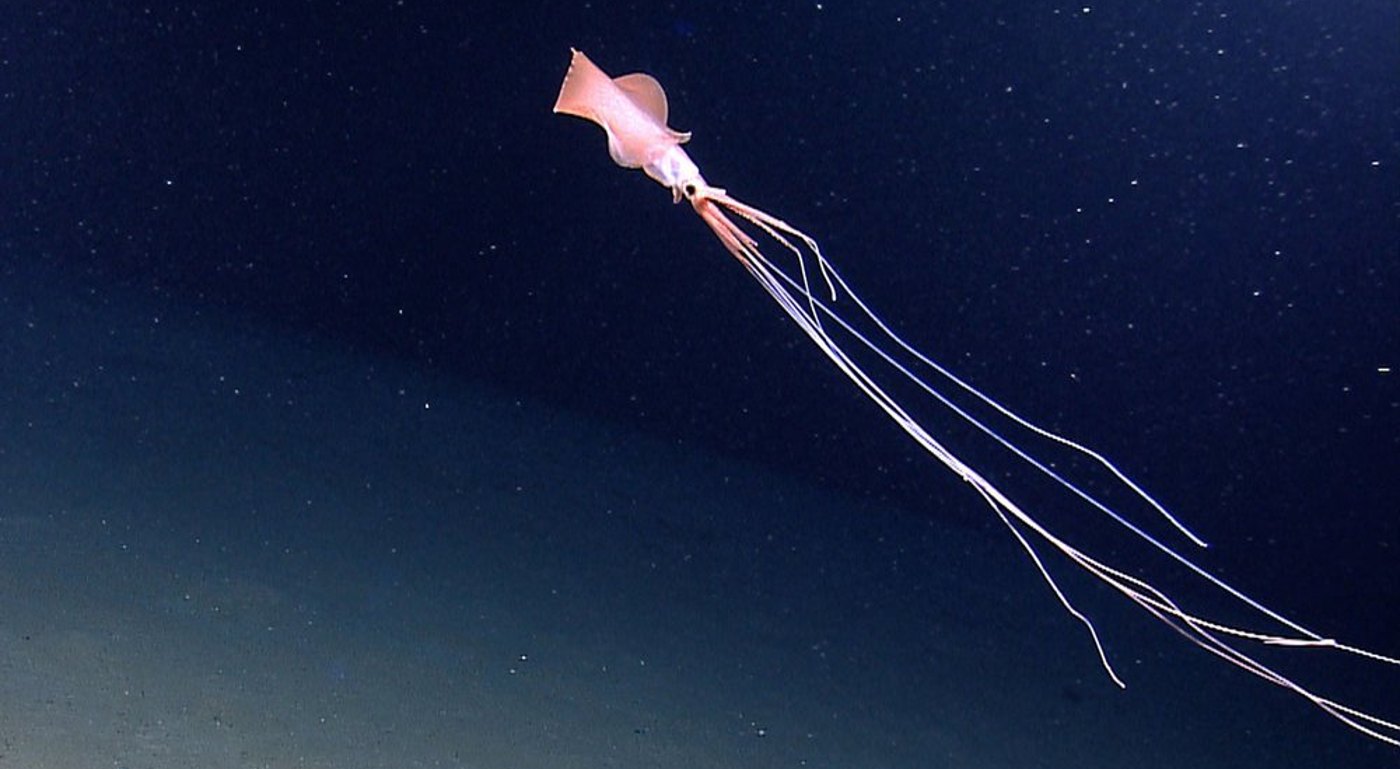 There’s a dynamic duo of divers out there that can’t seem to keep to stop finding tentacled animals in the deepest of undersea zones, where pressure and temperature prohibit the vast majority of ocean life from surviving.

Whilst pouring over film from their submersible’s recent dive to the bottom of the Philippines Trench, deep sea researcher Alan Jamieson noticed a squid that was gliding past the camera a mile below the deepest previously-recorded squid sighting.

The species in question is known as a magnapinnid or big-finned squid. The individual they saw was probably a juvenile, which suggests that there is an ecosystem down 6,200 meters, or nearly four miles below the surface, with which to sustain prominent predators.

“They’re really weird,” says Mike Vecchione, a Smithsonian Institute researcher and who Jamieson first forwarded the footage to. “They drift along with their arms spread out and these really long, skinny, spaghetti-like extensions dangling down underneath them.” Microscopic hooks and stickers catch unwary sea life which stray too close to the tentacles, and are thus eaten.

The dive was part of an expedition sponsored by Caladan Oceanic to discover the 1944 wreck of the USS Johnston which sank during the largest naval battle in history.

CHECK OUT: Watch This Massive Ocean Sunfish Swim With Paddle Boarders Off the California Coast

The wreck was found, and looked as if it “came down yesterday” remarked Caladon’s founder Victor Vescovo, the pilot of the submersible which found both the wreck and the squid.

The Abyssopelagic Zone was long-considered the deepest part of the ocean. With fewer words more severe than “abyss” to name the proposed subsequently-deeper marine zone, scientists settled on “Hadalpelagic” from the Greek word for the underworld, “Hades.”

This zone is reserved for ocean trenches and other depressions at a depth of 6,000 meters to 11,000 meters.

RELATED: 70 New Species Were Discovered in 2021 – Including 2 Guitarfish and a Pink Pygmy Pipehorse

Last year, the same scientists, Mike Vecchione and Alan Jamieson, along with Vescovo, recoded the deepest-living octopus, a discovery which expanded the total marine mileage in which octopuses can live to 99% of the world’s oceans.

No octopus had been found at a depth greater than 5,100 meters (around 3 miles) since 1971, but during a dive into the Java Trench they found a Dumbo octopus, named for its big ear-like fins, at just shy of 7,000 meters down (4.3 miles), at which point the pressure becomes about the same as a Tyrannosaurus’s jaws on your head.

In 2020 Vecchione and Jamieson discovered the deepest-dwelling jellyfish, which swam by the camera on Vescovo’s submersible at 9 kilometers, or 5.4 miles below the surface.

MORE: Whales Once Walked Along the Coasts of North America … Wait, What?

Vescovo would video tape another jellyfish in 2021—a trachymedusa at 10 kilometers, or a mind-boggling six miles straight down. At this depth the pressure is around 1,100-times greater than the pressure enforced by the Earth’s atmosphere, and would be like if your head was somehow being bitten by both Tyrannosaurus rex, and a smaller Tyrannosaurus rex.

(WATCH a video for this story below.)

Just two weeks ago, it appears we beat our own 2020 record of 9000m for the deepest jellyfish ever filmed. This clip is from 10,000m in the Philippine Trench, a gorgeous trachymedusae called Crossata. (Identified by Prof. Alan Jamieson, our Chief Scientist) pic.twitter.com/eBhKlYvAi2

SHARE This Positive Story From the Great Ocean Deep With Friends…