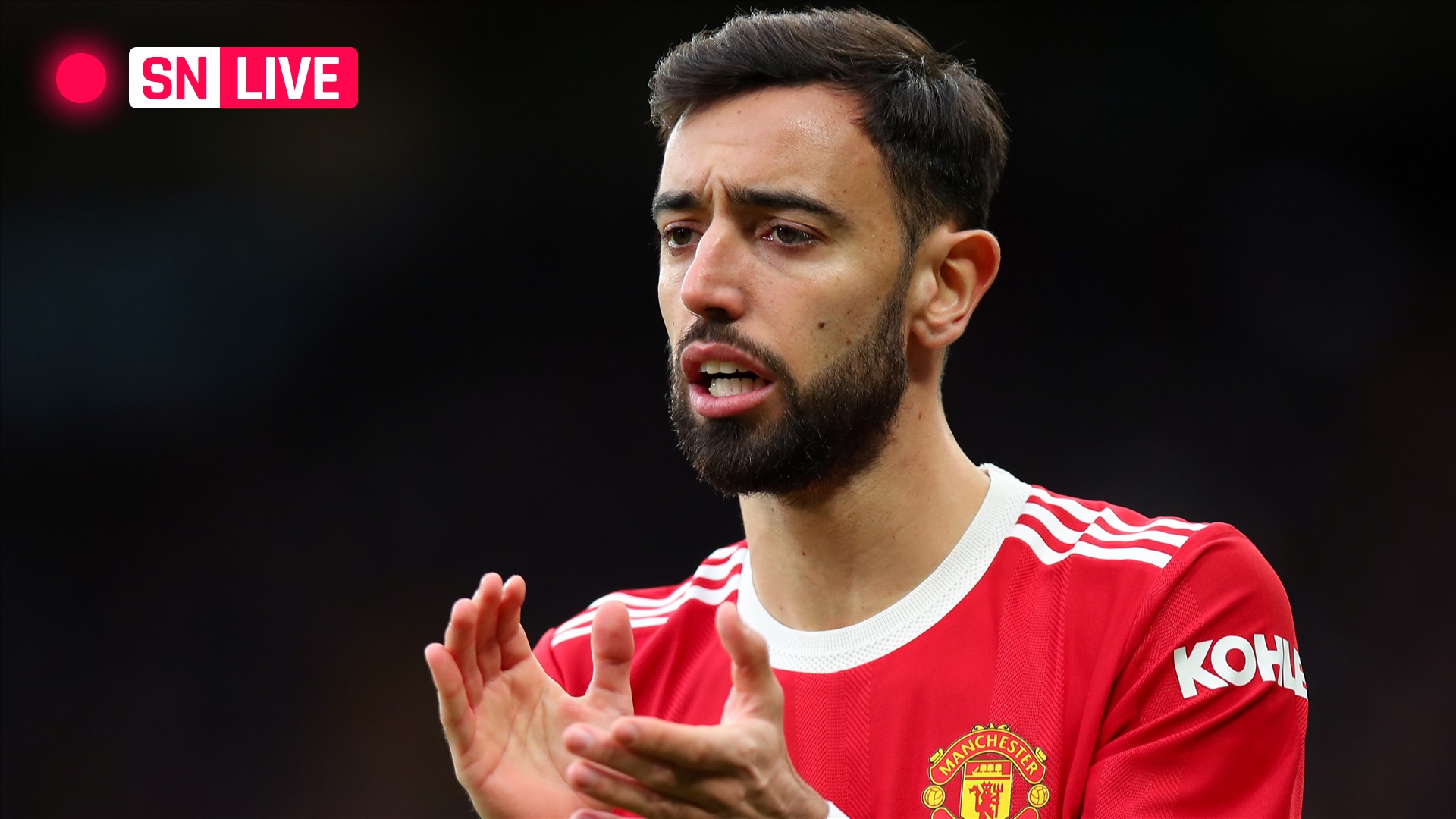 Steven Gerrard travels to Old Trafford for the first time as a manager, taking his Aston Villa side to face Manchester United in the FA Cup 3rd Round.

In the opposite dugout to Gerrard, Ralf Rangnick is under pressure for the first time as United’s interim coach, following a home defeat to Wolves last time out in the Premier League.

Villa is also aiming for a response after back-to-back league losses to Brentford and Chelsea since Christmas.

Awaiting tonight’s winner is a favorable home tie against Middlesbrough in early February, with United eyeing a path to FA Cup trophy No.13 and Villa to its eighth.

Sporting News will be following the match live and bringing you live updates and highlights before, during and after the game.

(All times Eastern, highlights only available in the US)

HALF-TIME: Man United 1-0 Aston Villa. Plenty of entertainment, and the host fortunate to go in to the break ahead.

48th min: Rashford again breaks well down his flank, but his tantalizing ball across the area is cleared.

45th min: Rashford looks offside on the right, but it isn’t called, and he tees up Cavani. The former PSG star sends it to Fernandes, who fires an outside-the-boot effort over.

44th min: McTominay catches a volley very well, but Martinez gratefully saves. The Scottish midfielder certainly has the taste for goals, and the technique on that effort was flawless.

43rd min: Some sloppy play all round for the last few minutes. Mix-ups in midfield leading to acres of space to run into, but attackers unable to make the most if it.

38th min: Fernandes has an effort blocked at the other end, before a brilliant Luke Shaw long-range strike, tipped over by Martinez.

37th min: Buendia is a joy to watch at his best, with his nimble feet – alongside the harrying of Watkins – causing McFred and the central defenders plenty of problems.

35th min: Luiz finally gets to take his corner, and it reaches Ings, but the English striker can’t make his flick-on count. It looks a matter of when, not if, Gerrard’s men get on the scoresheet.

33rd min: United finally has some breathing room after Villa’s swarm – but it’s come at a cost. Dalot is injured, with Aaron Wan-Bissaka ready to replace him.

29th min: Watkins hits the bar! A long clearance forward from Villa is met by a clumsy Lindelof touch, who gives it straight to Watkins. The striker turns Lindelof and gets his shot off but it hits the underside of the woodwork. The visitors threatening.

28th min: At the other end, Fernandes on the break tees up Cavani, whose close-range effort is saved by Emi Martinez.

27th min: A strong piece of possession play from Villa ends in a Buendia effort on target, saved low by David De Gea.

24th min: Greenwood’s first menacing dribble into a dangerous area ends with a wayward shot over the bar, but the Red Devils gaining some much-needed composure in the build-up play.

19th min: Watkins is ready to pounce on any opportunity, winning the ball high up a couple times already. That leads to a stinging John McGinn shot on this occasion. United’s defense is there for the taking.

15th min: As Diogo Dalot and Rashford both have exciting forays forward in an end-to-end game so far, catch up on the opening goal from McTominay here:

13th min: Another chance goes begging! Emi Buendia with a wonderful dribble right through the heart of United’s back-line, but his cross-come-shot misses both the goal and Ings.

11th min: Chance for Villa. Douglas Luiz puts a corner in for an intelligent flick-on from Tyrone Mings, but Watkins can’t finish the opportunity at the back post. Jacob Ramsey is booked soon after as United try to break.

GOAL – 8th min: It’s the ‘McFred’ connection! After the first corner of the game seemed to have been wasted, it eventually goes out to Fred on the right, who whips a brilliant ball onto the head of McTominay. 1-0 to United.

6th min: McTominay has a long-range shot saved. United crowd are feeling a promising start. Rashford is on the left and Greenwood on the right of a 4-2-3-1.

3rd min: Both sides attacking with purpose. Rashford can’t make the most of a break into the area at one end, and Watkins similarly at the other. Fernandes key to United’s play, as expected.

KICK-OFF: We’re underway! Fernandes begins proceedings, and Gerrard is on the wrong end of plenty of chants from the United fans.

14:48pm: Finally, the German downplayed reports of a rift in the locker room: “We don’t have any time or energy to listen to rumors. The players know I have an open-door policy. With a squad of 26, you always have a few unhappy players who want to play more.”

14:47pm: Asked whether United can be a success while constantly switching formations, Rangnick responded: “No. In the long-term it would be good to have one formation, one style of play. It took Jurgen Klopp a couple of months. Right now my job is to work with the players I have inherited here. It’s about small steps.”

14:45pm: Rangnick told the BBC he has already hit his first major objective: “Before I arrived, it was obvious the team shipped too many goals. This was the first approach, to stop conceding – we have achieved that.”

14:40pm: The Villa manager also confirmed the club are still active in the transfer market, and spoke about the partnership between Danny Ings and Ollie Watkins: “They’re two fantastic players. Danny is getting back to his best. Ollie is now our most consistent player.”

14:39pm: Gerrard is eyeing a big FA Cup run: “We’ve got to. We’re not involved in any European competition. The draw wasn’t as kind as we’d have liked. We’re doing to have to be at it.”

14:35pm: Alan Shearer believes tonight is hugely important for Rangnick, telling the BBC: “It hasn’t been anywhere near good enough from a lot of the players. The system the manager has played hasn’t worked. It’s got to start tonight.”

14:22pm: Dean Henderson was another man expected to be starting for the Red Devils, but according to the MEN, has been left out while he angles for a loan move away in the January transfer window.

14:18pm: Rangnick also says Jadon Sancho was “supposed to be in the squad,” but a hamstring issue has kept the English winger out of contention.

14:12pm: Ronaldo’s absence is down to a minor injury, rather than the No.7 being rested or dropped:

Rangnick on Ronaldo: “I spoke to Cristiano yesterday before training and he said he’d had some problems for the last couple of days, spine minor problems and in the end we decided it would make more sense not to take any risks in a cup game that could last 120 minutes.” #mufc

14:00pm: How will Rangnick set his side out? The German could slot Fernandes into the center of a 4-2-3-1, or alternatively continue with his 4-2-2-2 formation. Even with the latter, there’ll be questions over whether Marcus Rashford or Mason Greenwood is alongside Edinson Cavani up top.

13:55pm: Ronaldo misses out! The Portuguese superstar has not even been named on the bench, with compatriot Bruno Fernandes returning to the starting XI as captain.

13:42pm: One man who definitely won’t be on the field tonight is Philippe Coutinho. The Brazilian has, however, today completed his Villa medical and is all set to make his debut this coming weekend.

13:40pm: We’re now 15 minutes away from confirmed team news. Will Cristiano Ronaldo be rested ahead of another league meeting with Villa on Saturday?

13:34pm: United is looking to end a five-season trophy drought, with its last piece of silverware being the 2016/17 UEFA Europa League under Jose Mourinho. The Red Devils’ most recent FA Cup triumph came a season earlier, under Louis van Gaal.

13:29pm: Gerrard, who won the FA Cup twice as a Liverpool player, has spoken of the FA Cup’s appeal in his pre-match press conference: “It’s a real tradition, it’s a special competition for everyone who’s English and British because we know it very well. But I think every foreigner who comes into the country, when you’re having conversations with them, the FA Cup always comes up. So, it’s got a name for itself worldwide as well.”

13:22pm: Last time these clubs met at Old Trafford, Villa came away with three points in the Premier League. Bruno Fernandes skied a late penalty in a 1-0 defeat back in September.

13:11pm: Rangnick has called on Man United to play with a “different energetic level” to that which the side showed against Wolves. He has also picked out central midfield as Aston Villa’s key strength.

13:02pm: Gerrard’s last appearance as a player against Man United was probably his most painful – the infamous red card at Anfield, just 38 seconds after he was substituted on.

12:55pm: Welcome to Sporting News’ live coverage of Man United vs. Aston Villa. As with last season, there are no replays in the FA Cup 3rd Round — so the tie must be decided tonight, with extra-time and penalties if necessary.

How to watch Man United vs. Aston Villa

Monday’s FA Cup match between Manchester United and Aston Villa from Old Trafford will be broadcast exclusively on ESPN’s streaming service ESPN+ in the USA.