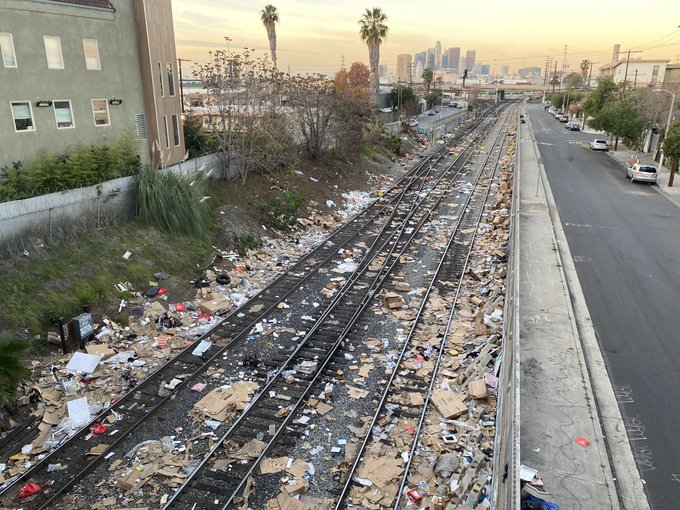 LOS ANGELES (NewsNation Now) —If you’re expecting a package, you might want to check on it.

Thousands of Amazon and UPS packages in transit to people across the country were found rifled through and abandoned on the side of train tracks in Los Angeles. Littering the side of the tracks were packages addressed to recipients from Seattle to Las Vegas and other places around the country.

NewsNation’s West Coast Correspondent Alex Caprariello reported items in these boxes ranged from family portraits, boots and medications to COVID-19 rapid tests swabs and PPE. Among the pricier items he saw was a box of Humira — an arthritis medication that can cost patients more than $6,000 alone.

Union Pacific said it’s seeing an increase in cargo thefts and has had to add more special agents to watch the tracks in the area.

“Union Pacific is very concerned about the increased cargo thefts in California, and we have taken several steps to address this criminal activity,” Union Pacific said in a statement. “These rail crimes pose a serious safety threat to the public, our employees and local law enforcement officers.”

Similar incidents were reported in November as well, according to the NBC LA.

Amazon deferred comment to law enforcement but said any customers missing a package from them should contact Amazon’s customer service to report it.

“Amazon will look into it, try to find a solution/track the package and/or reimburse the customer for their expenses,” a statement from the company said.

Along with increasing the number of Union Pacific special agents on patrol, the UP is also exploring additional technologies to help combat criminal activity.

“We also will continue to work with our local law enforcement partners and elected leaders,” Union Pacific said.

Union Pacific said its criminal rail theft is up 160% in Los Angeles County over the past year. They estimate there were over 100 people arrested for vandalizing trains during last year’s peak holiday season.

Despite this, Union Pacific said it has not been contacted for any court proceedings. In a letter to Los Angeles County District Attorney George Gascón, they asked him to reconsider a special directive that states certain misdemeanor crimes, such as trespassing, should be dismissed if there are no outlying factors to be considered.

Union Pacific said in the letter that they understand the policy’s social justice goals, but it also wants to hold people accountable and protect its employees.