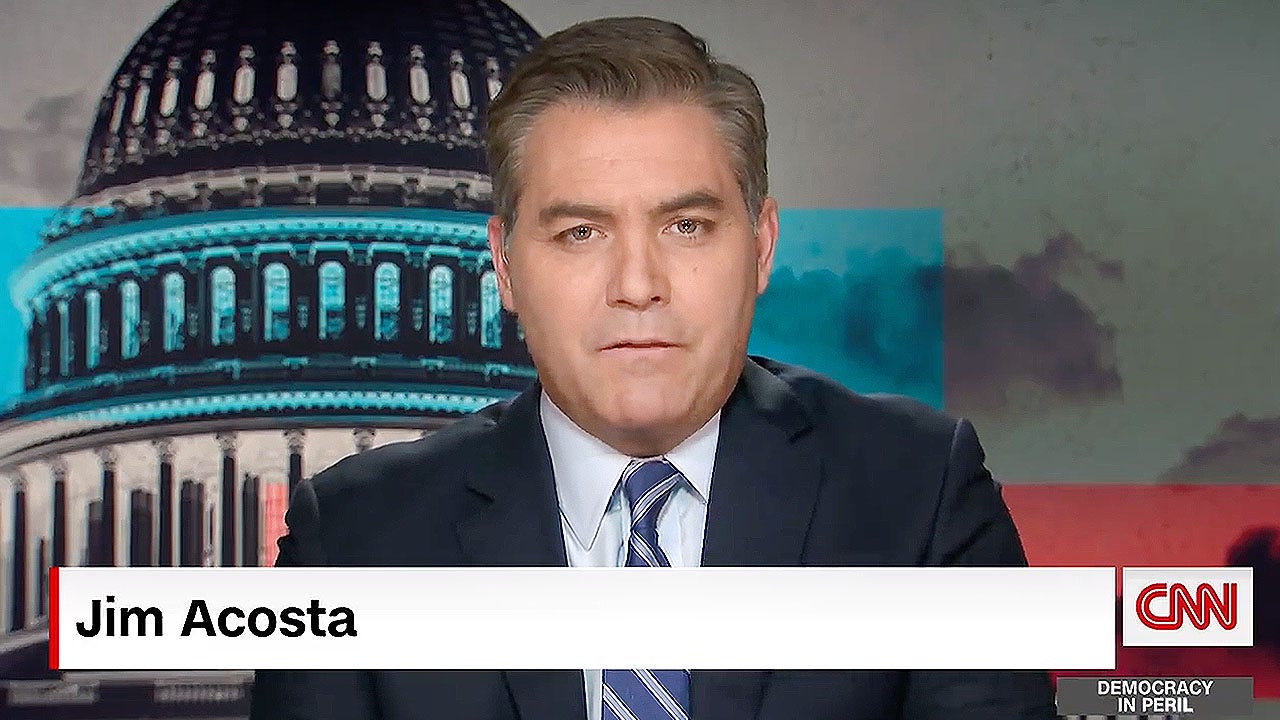 Jim Acosta’s troubled foray this week into CNN’s primetime lineup included everything from disinformation to widely mocked hot takes, but the outspoken host’s saving grace could be that hardly anybody tuned in.

CNN has experimented with different options at 9 p.m. ET since it was forced to terminate Chris Cuomo last year. This week, it was Acosta’s turn to occupy the time slot with the network’s continuing special, “Democracy in Peril,” that failed to resonate with viewers.

CNN’s Jim Acosta averaged only 561,000 viewers through the first three episodes of his primetime audition.
(CNN)

Acosta averaged only 561,000 viewers through the first three episodes of his primetime audition, while Fox News’ time slot competition “Hannity” averaged 3 million viewers during the same period. Acosta’s primetime debut also shed viewers from the 774,000 that “Cuomo Prime Time” attracted during November before the liberal network canned its biggest star.

“Chris Cuomo was pompous but also entertaining. His replacement either needs to be animated or respected, neither of which is Acosta,” OutKick media columnist Bobby Burack told Fox News Digital.

Acosta emerged as a favorite to CNN when he was a White House reporter during the Trump administration who became known for bickering with Trump and multiple press secretaries, as well as offering liberal editorializing despite being billed as a straight-news reporter. He was removed from the White House beat and named “domestic correspondent” as President Biden took office, and he has since been a reliably liberal opinion host on weekends.

“CNN viewers may like Jim Acosta’s political views, but that doesn’t mean they like him,” Burack continued. “How could they? Acosta is a bitter man, who talks in clichés and cracks jokes only he finds funny.”

CNN’s Jim Acosta was once temporarily banned from the White House after he engaged in a contentious back-and-forth with Trump during a press conference that included briefly contacting a female White House aide who was attempting to take the microphone. (REUTERS/Jonathan Ernst)

On Monday, Democratic lawyer Marc Elias misinformed CNN viewers by falsely claiming the network was “broadcasting to millions and millions of people” during an episode of “Democracy in Peril” that drew only 511,000 people. Acosta was unable to correct Elias’ misinformation, as he didn’t know the size of his audience in real time, but the previous week’s edition of “Democracy in Peril” on CNN averaged only 555,000 average viewers.

Disastrous ratings weren’t the only thing keeping Acosta in the news this week. Indeed, he declared Monday he still had “marks on my back” from his time covering Trump.

“As someone who witnessed the unraveling of our democracy, had a front row seat to it … is it better? Worse? Can we turn this around in your estimation? You were the White House correspondent for the entire Trump reign,” fellow CNN host Don Lemon asked Acosta.

“Yeah. And I’ve got the marks on my back to prove it, Don,” he responded while laughing about the apparent reference to physical abuse.

Jim Acosta emerged as a CNN favorite when he was a White house reporter during the Trump administration. (REUTERS/Carlos Barria)

By Tuesday, Acosta was making news for suggesting Virginia was being run like a “Soviet-style police state” under new Republican Gov. Glenn Youngkin because the governor set up an email tip line in which parents can report teachers that teach “divisive” topics to their children, such as critical race theory. He also tossed in a jab at Youngkin’s clothing during the rant.

“You know, I seem to remember Glenn Youngkin campaigning in a fleece vest in Virginia. He was running as a different kind of Republican. I was told there was going to be a vest, not a Soviet-style police state across the Potomac from Washington,” Acosta told liberal writer Molly Jong-Fast.

Fox News contributor Joe Concha said this week that “Acosta is the king of cheesy hyperbole.”

“Acosta’s show this week, by the way, is called ‘Democracy in Peril.’ It should be called Sanity in Peril because when you start comparing the Commonwealth of Virginia to a Soviet state, you’ve either A. never studied Soviet history or B. you’re seeking attention, and no one begs for attention quite like Jim Acosta, the heavyweight champ of cheesy hyperbole,” Concha said.

Then CNN’s White House correspondent, Jim Acosta reports from the southern border in 2019.

Virginia Attorney General Jason Miyares responded Wednesday, dismissing Acosta’s characterization during an appearance on “Hannity.” Miyares suggested Acosta should read up on world history before declaring Virginia another version of the USSR or Cuba.

“I think what Jim Acosta said — listen, my family fled Communist Cuba. You want to talk about what ‘Soviet-style’ looks like? It’s the opposite of freedom,” Miyares said. “Acosta maybe needs to take some history classes of what Soviet-style communism actually looks like. And [Virginia is] the opposite.”

Before hitting primetime, Acosta also spoke out against former New York Times opinion editor Bari Weiss on Sunday for saying she’s had enough with COVID-19. Weiss said on HBO that it’s “ridiculous” the nation has not returned to normal after two years – a sentiment she said is bipartisan. During a segment with CNN medical analyst Dr. Jonathan Reiner on Sunday, Acosta suggested Weiss was simply “trolling.”

“I’m done with that attitude,” Acosta said. “She needs to understand that trolling people to own the libs is not a sacrifice.”

Despite the onslaught of negative attention, not everything was bad in Acosta’s world this week. On Thursday night, he tweeted what appeared to be an announcement that he has a new puppy.