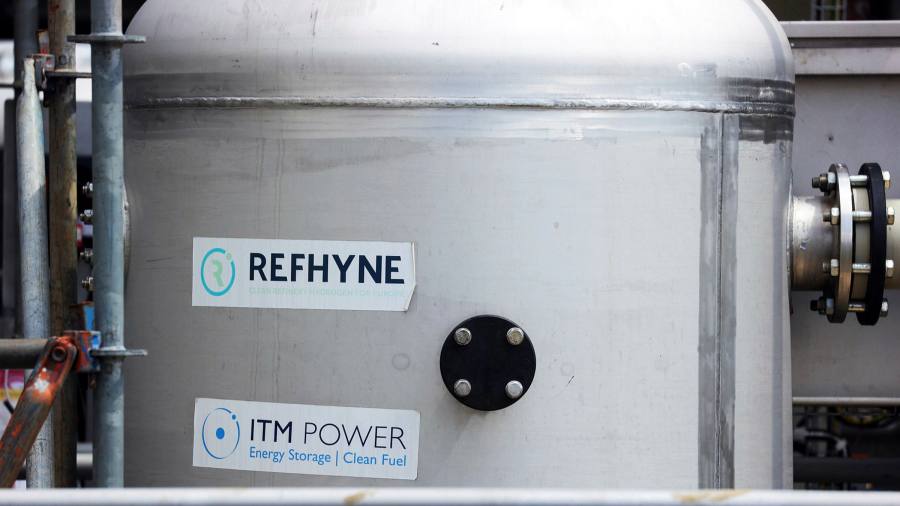 ITM Power, a Sheffield-based producer of electrolyser machines that make hydrogen from water, is seeking to raise £250m to help finance the construction of a second factory in the UK and expand overseas.

The company, which is listed on London’s junior Aim market, is looking to raise the cash through a sale of shares to new and existing investors, a group that includes German industrial gases group Linde, JCB and Snam, the Italian energy infrastructure group.

It will use the money to build a second, bigger factory next to its existing plant near Sheffield, and another plant in an international market where there is significant demand for electrolyser machines.

ITM chief executive Graham Cooley said the surge in global gas prices and efforts to decarbonise heavy industry had resulted in a significant acceleration of large-scale, “green” hydrogen projects, where the electricity used to make the gas derives from renewable sources. As a result its tender pipeline had exploded.

“Demand in the market is very, very strong,” he told the Financial Times. “We will rapidly need further capacity”.

Electrolysers split water into its constituent molecules of hydrogen and oxygen. Supporters believe green hydrogen produced when the machines are powered with renewable energy can help decarbonise some of the world’s most polluting industries.

About 70m tonnes a year of “grey” hydrogen — which is produced from natural gas — is currently consumed by the chemical industry to make ammonia and fertiliser, and in oil refining.

One of ITM’s early customers was Royal Dutch Shell, which is installing the world’s biggest electrolyser at its Rhineland refinery north-west of Bonn in Germany.

In August ITM opened the world’s largest electrolyser factory near Sheffield. The plant has the capacity to produce 1,000MW (1GW) of electrolysis equipment per year. Its two new automated factories will raise its capacity to 5GW by 2024.

The company is still lossmaking and reported revenue of £1.2m in the three months to the end of July, up from £300,000 in the same period a year ago.

Although hydrogen has been hailed for decades as a potentially revolutionary fuel, it has never taken off. But it now has backing from the EU and dozens of countries, including the UK, which have all launched hydrogen strategies as they attempt to meet 2050 net zero targets.

However, there is still scepticism that enough green hydrogen can be made using renewable electricity at a commercially viable price.

“As the price of natural gas has gone up, the price of grey hydrogen has gone up. Now, all over the world you can make green hydrogen at a lower cost than industrial hydrogen,” said Cooley, who reckons the clean version of the fuel can also help provide energy security.

“With green hydrogen you have a net zero energy gas . . . but it gives you the ability to make your gas domestically so you do not have to import it. Therefore you are not reliant on any other supplier.”

Shares in ITM hit a record high above 650p in January as investors bet the gas could replace fossil fuels in everything from trucks to homes. At the time, the company was valued at about £3.5bn.

The shares closed just above 450p on Thursday. Linde, which owns a near 18 per cent stake in the company, has subscribed for £20m shares in the placing.

Investec and Bank of America are joint bookrunners for the share sale.