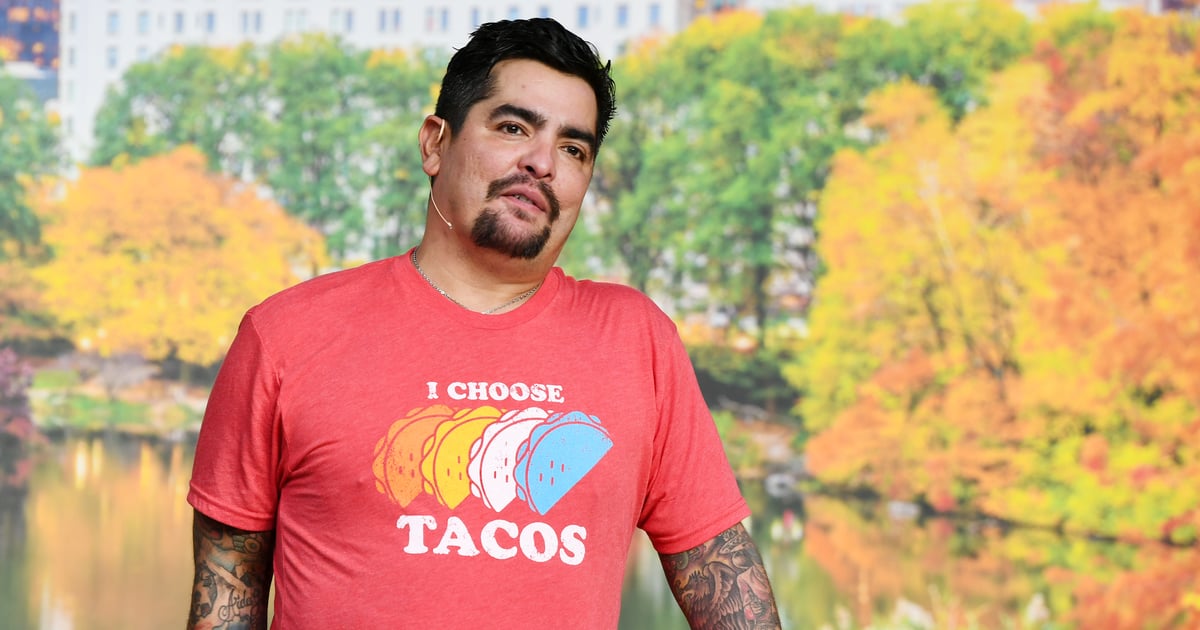 He’s an award-winning chef, a successful restaurateur, a well-known TV personality, an author, and a dad, but what many people don’t know is that Mexican American chef Aarón Sánchez is also quite the philanthropist. Aarón embraces seemingly every opportunity presented to him to uplift the Latinx community, particularly other Latinx chefs and business owners.

Most recently, he partnered with PepsiCo to launch Juntos Crecemos, a $50 million initiative designed to provide Latinx entrepreneurs with food-based small businesses like bodegas, restaurants, and carnicerias resources and training to help grow and strengthen their companies over the next five years. For this particular project, Aáron is essentially serving as a spokesperson, but really, outreach with Latinx small-business owners is a part of his everyday life.

The 45-year-old Texas-born millionaire is a third-generation chef who is passionate about his culture and supporting the Latinx community, and we got to chat with him about his philanthropic efforts and his best advice for Latinx entrepreneurs.

“To be able to invest was such a compelling idea. It’s something that fell in line with my philanthropy,” Aarón told POPSUGAR about Juntos Crecemos, explaining that back in 2016, he founded the Aarón Sánchez Scholarship Fund to help Latinx kids with culinary ambitions achieve their goals. “We’ve had over a dozen kids enrolled, and six have completed it [the program],” he told us. And that’s a big deal, too. Culinary school currently costs about $30,000 to complete in the US, and Aarón’s organization is not only providing full scholarships for the Institute of Culinary Education in New York City but also offering mentorship and paying for room and board and supplies, as well as offering opportunities for unique experiences for each graduate, which have in the past included working with top chefs like Alex Stupak and José Luis Chavez and attending the Austin Food & Wine Festival as one of Aarón’s assistants. What that all amounts to is an organization that’s not just handing over the money and disappearing but one that is fostering long-term success for young Latinx chefs in training. That’s real impact, and we totally get why it immediately felt like Juntos Crecemos and its five-year plan seemed like a natural offshoot of what Aarón has already been doing.

Aarón knows just how important it is to feel and be supported as an entrepreneur, though, and that is reflected in the choices he makes personally as well. “I have all the fears and uncertainties of being a Hispanic business owner,” Aarón said. “When I’m traveling and shopping, I go to independent markets, support independent Latin businesses. I have beautiful connections. It’s very fulfilling and heartwarming.” And it’s those everyday encounters that have shaped Aarón’s views on representation and success.

“I’m a citizen of the world. I see opportunities at every corner. I’m a big ‘no excuses’ person,” he told us. “You have to go seek out what you want. I think it’s important to be represented and to have your voice, but don’t get caught up in all that. You end up becoming bitter and seeing nothing beautiful,” he said. And what about the challenges that Black and brown chefs face, whether they be cultural or financial? Aarón has been there, and he knows what it takes to overcome them.

Aarón explained that the culinary world is quite different now than when he got into it. Namely, that it can actually make for a lucrative career. So all those concerns your mamí and papí have? They’re not as valid as they once were. “When I started cooking, it was different. Hospitality got paid a certain amount, and now we get paid differently. It’s really rewarding,” he said. But it’s not just about the money. “Taking care of other people. You’re fulfilling that, and that gives you joy,” Aarón explained. And we couldn’t agree more. If there’s one thing we’ve learned about “work” in the 21st century, it’s that we should all be striving to do something we care about and that we feel good about.

Getting there isn’t always easy, but it’s worth it, and with a bit of strategy and determination, Aarón thinks anyone can do it. “The best piece of advice I have is to make a list of mentors. Write a hand-written letter [to each] and say, ‘I admire your work, I would like to be able to help my growth and extract ideas,'” he suggested, alluding to the importance of networking and drawing on your connections. “It can even be in different fields, and that will help you be well-versed,” Aarón explained. With his massive success in mind, it’s advice one shouldn’t quickly ignore.