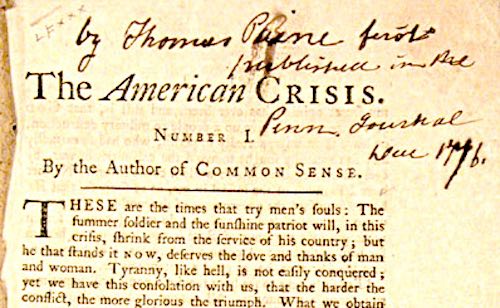 And, 245 years ago today, Thomas Paine published his first essay under the pseudonym, Common Sense, to inspire American colonists in a language that the common man could understand. Paine knew that the Colonists weren’t going to support the American Revolutionary War without proper reason to do so, so he set out to persuade them.

The pamphlet series began: “These are the times that try men’s souls: The summer soldier and the sunshine patriot will, in this crisis, shrink from the service of his country; but he that stands it now, deserves the love and thanks of man and woman.”

It was read aloud to the Continental Army later that week, before the Battle of Trenton, to bolster morale among patriots, as well as shame neutrals and loyalists toward the cause. With strong deist beliefs, Paine stated that he believes God supports the American cause, “that God Almighty will not give up a people to military destruction, or leave them unsupportedly to perish, who have so earnestly and so repeatedly sought to avoid the calamities of war, by every decent method which wisdom could invent”. (1776)

And, 106 years ago today, Edith Piaf was born in Paris. The French cabaret singer, songwriter and actress was one of France’s greatest international stars.

Her hit song “La Vie en Rose” (Life in Rosy Hues) sold a million copies in the US alone in 1947. Written and composed by Piaf, it is one of the most familiar songs worldwide of the last century. The 2007 film of the same name tells the story of Piaf, played by Marion Cotillard whose portrayal won her the Academy Award for Best Actress. WATCH an English version of her hit, which “France’s Little Sparrow” recorded in 1950, with lines like, “When you speak, angels sing from above…Everyday words seem to turn into love songs”. (1915)

Happy 41st Birthday to actor and singer Jake Gyllenhaal who received an Oscar nomination for his role in Brokeback Mountain (2005). He also starred in Zodiac, The Day After Tomorrow, Love & Other Drugs, Prisoners, and earned BAFTA nominations playing a journalist in Nightcrawler, and a troubled writer in Nocturnal Animals.

Gyllenhaal, whose godfather was the late actor Paul Newman, joined the Marvel Universe in Spider-Man: Far From Home last year, portraying Mysterio. In 2020, Jake became a first-time Tony Award nominee for Sea Wall / A Life. Next year, he will revive his 2016 on-stage portrayal of French painter George Seurat in the Pulitzer Prize-winning musical Sunday in the Park with George. WATCH him talk about his new lockdown obsession and sing a bit of the Sondheim score on Colbert… (1980)

Also, 42 years ago today, the classic film Kramer vs. Kramer premiered in theaters—a legal drama exploring divorce and custody issues, which was a new storyline for audiences— particularly the sympathies extended toward both sides and both genders, as a career-obsessed dad learns how to be a parent when his wife leaves him and their 6-year-old son.

Kramer vs. Kramer not only portrays the psychology and fallout of divorce and its impact on small children (after the mom suddenly wants her son back and a court battle ensues), but the parity of parents’ rights, work–life balance, and the single parent experience. It was a major critical and commercial success, grossing $106.3 million on its $8 million budget, becoming the highest-grossing film of the year. WATCH the compelling trailer… (1979)

Also, 178 years ago today, Charles Dickens’ book A Christmas Carol was first published. The wildly successful novella depicts the story of Ebenezer Scrooge, an elderly miser who is visited by three ghosts—from Christmases Past, Present, and Yet to Come. During their nighttime visits on December 24, Scrooge is transformed into a kind and compassionate man—illustrating the real-life ability of any person to redeem themselves. Written in 6 weeks, the first edition sold out in less than a week. He began public readings of the story later proved so successful he undertook 127 further performances until the year of his death.

Dickens was, at the time, challenged by financial problems himself, even having written Oliver Twist, but was especially dismayed by the sad lot of those around him in Victorian England: he toured the Cornish tin mines, where he saw children working in appalling conditions; he was disturbed by a London school for half-starved, illiterate street children. His new story would endeavor to break open readers’ hearts to feel compassion for these struggling classes.

His exclamation “Bah! Humbug!” became sealed in the English lexicon as an expression of cynical retort toward sentimentality, and the name “Scrooge” was forever after used as a designation for miserly selfishness, and was added to the Oxford English Dictionary as such in 1982. WATCH George C. Scott’s classic scene, ‘What Day is This?’… (1843)