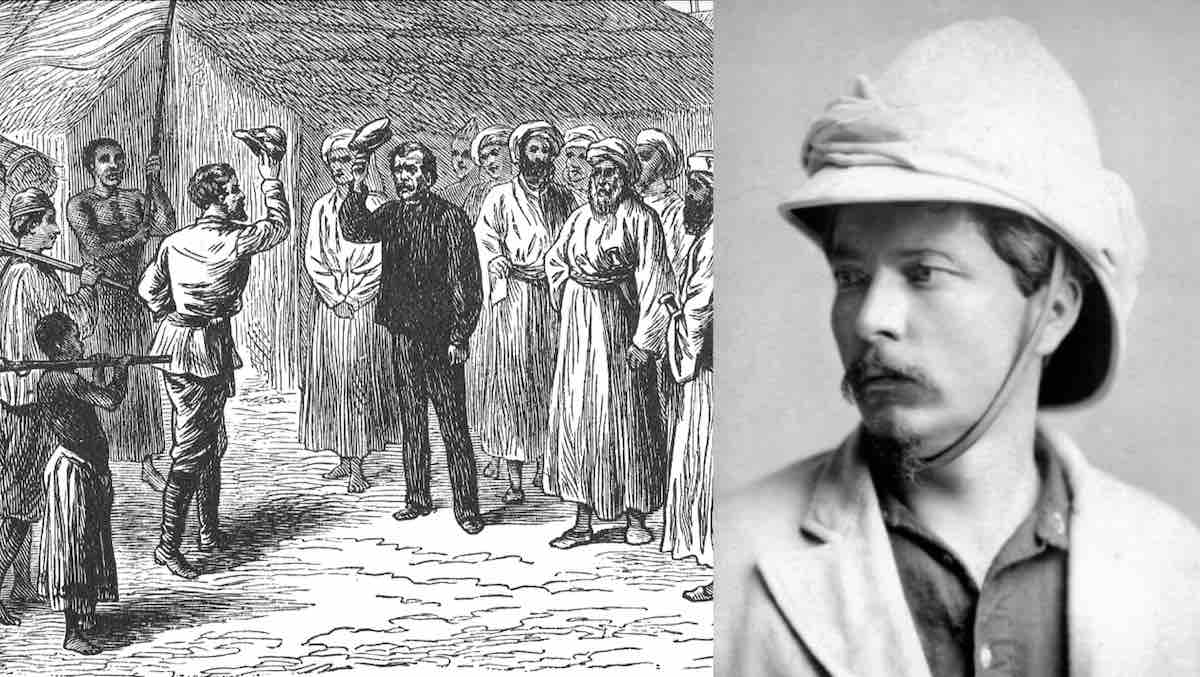 And, 150 years ago today, after going missing for six years, the Scottish medical missionary and explorer of Africa, Dr. David Livingstone, was found by journalist Henry Stanley (pictured), who famously asked upon meeting him, “Dr. Livingstone, I presume?”

One of the most popular national heroes of late 19th-century Britain, the Congregationalist anti-slavery preacher was one of the first Westerners to make a transcontinental journey across Africa.

Livingstone preached a Christian message but did not force it on unwilling ears; he understood the ways of tribal chiefs and successfully negotiated passage through their territory by traveling light, and being hospitably received and aided by locals. His fame as an explorer and his obsession with discovering the sources of the River Nile was founded on the belief that if he could solve that age-old mystery, his fame would give him the influence to end the East African Portuguese and Arab-Swahili slave trade.

The film follows Kevin, an 8-year-old boy, who must defend his Winnetka, Illinois home from a pair of scheming burglars (Harry and Marv), after his family accidentally leaves him behind when rushing to the airport with his siblings and relatives to fly to France for their Christmas vacation.

Although Hughes exceeded his $10 million budget, the holiday classic grossed $476.7 million and held the record for the highest-earning comedy film ever, until two decades later. Macaulay Culkin was paid $4.5 million to appear in the 1992 sequel, Lost in New York, compared to $110,000 for the original.

Hughes hatched the movie idea as he was going away on vacation and making a list of everything he didn’t want to forget. “I thought, ‘well, I’d better not forget my kids.’ Then I thought, ‘what if I left my 10-year-old son at home? What would he do?’” He then wrote eight pages of notes that developed into the screenplay. WATCH the trailer and learn where the concept came from… (1990)

Happy 61st Birthday to Neil Gaiman, the English author and screenwriter whose notable works include The Sandman comic book series and novels Stardust, American Gods, and Coraline, which was turned into a Tim Burton film.

Winner of numerous awards, he is the first author to win both the Newbery and the Carnegie medals for the same children’s work–The Graveyard Book, for ages 10 and up. In 2013, The Ocean at the End of the Lane was voted Book of the Year in the British National Book Awards. (1960)

Also, on this day in 1973, Elton John hit No.1 on the US album chart for the third time with his seventh LP Goodbye Yellow Brick Road. The double disk set became his best selling studio album with worldwide sales of over 15 million copies, certified 8× platinum.

Recorded at the Château d’Hérouville in France, the album’s hits included the Marilyn Monroe tribute, Candle in the Wind, as well as Bennie and the Jets, Saturday Night’s Alright for Fighting, Goodbye Yellow Brick Road, plus Funeral for a Friend/Love Lies Bleeding, Harmony, and Gray Seal. WATCH a video on the Making of the LP…

And, 52 years ago today, Sesame Street first aired on 180 PBS public television stations using Jim Henson’s puppets to teach letters, numbers, and colors, with the goal or preparing less advantaged children for school. Created by Joan Ganz Cooney and Lloyd Morrisett and produced by their Children’s Television Workshop, the show by 2009 was translated and broadcasting in more than 140 countries.

Sesame Street is celebrating its 50th Anniversary with a special on HBO yesterday, honoring the people—and monsters—that taught generations of children through songs and skits. The special, which airs on PBS November 17, features celebrity guests like Whoopi Goldberg, Patti LaBelle, Elvis Costello, Meghan Trainor, Sterling K. Brown, and Norah Jones, and clips of other iconic visits to the Street (like Stevie Wonder). Kermit the Frog, Grover, Big Bird, Bert and Earnie, Oscar the Grouch, The Count, Elmo, and other adorable Muppets also drop by.

In recent years, the Emmy Award-winning educational show has tackled societal issues like kids in foster care, children with autism, homelessness in families and hunger, by introducing new Muppet characters to the neighborhood—even one that is HIV-positive—all in the hopes of teaching compassion and tolerance for diversity.

*NOTE TO INTERNATIONAL VIEWERS: Watch the video at CBS, here —or see the behind the scenes tribute below…