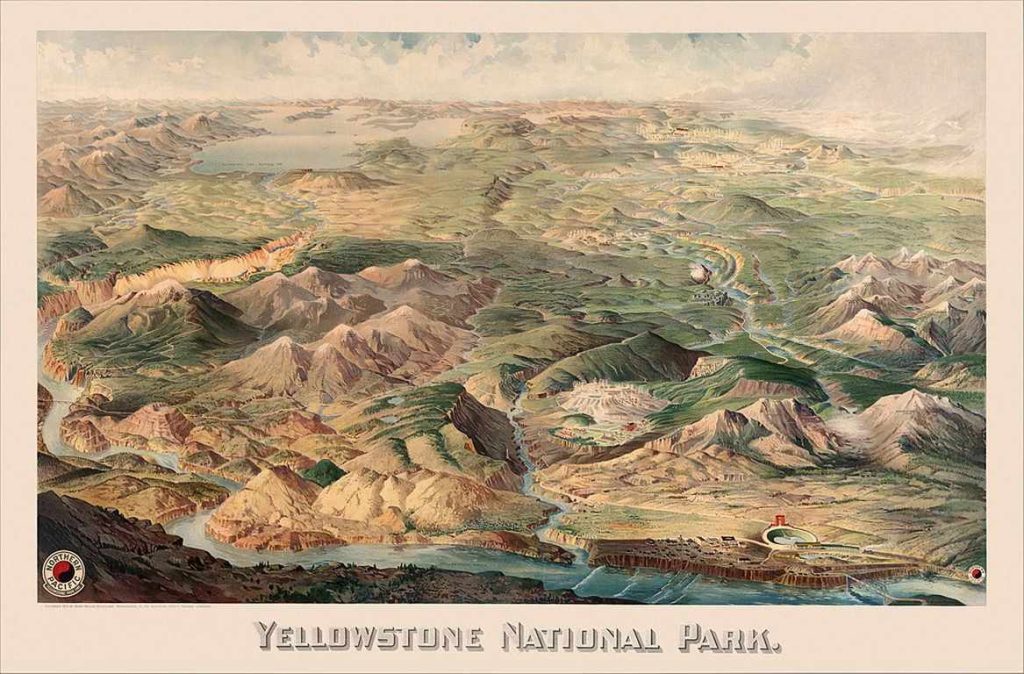 Happy 150th birthday to the nation’s (and the world’s) first National Park, Yellowstone! Known by many names over the years, from “Mi tsi a-da-zi,” to “Colter’s Hell” to “Wonderland,” its collection of geysers, hot springs, and boiling mud pools, nestled among pine forests, river gullies, and wide plains, is totally unique in the world. Spilling over the northern border of Wyoming into Idaho and Montana, and reaching down across Jackson Hole, the Grand Tetons, and the surrounding foothills, Yellowstone lies at the heart of the “GYE” or Greater Yellowstone Ecosystem, the largest remaining nearly-intact ecosystem in the Earth’s northern Temperate Zone. WATCH Nat Geo’s brief history of Yellowstone… (1872)

During expeditions across the west during the early 1800s, reports occasionally came back of a place where rivers boiled, the ground shifted and melted away, and trees turned to white rocks. They were dismissed as fairy tales— as John “Colter’s Hell” based on the man’s stories. Eventually mountain man Jim Bridger reported the same, but it wasn’t until Nathaniel P. Langford’s expedition following the Civil War that people began to consider it reality. His accounts, published as The Wonder’s of Yellowstone,” paired with the corresponding account of Truman C. Everts, who got completely lost for 37 days in what would become the park, and who fell into hot mud pools, was chased by wolves, and had to hide up a tree from a mountain lion, convinced the legislative branch a set aside an enormous chunk of that region as a “nation’s park”.

27 Native American Tribes have historic and modern connections to the land and its resources. For over 10,000 years before Yellowstone became a national park, it was a place where Native Americans lived, hunted, fished, gathered plants, quarried obsidian, and used thermal waters for religious and medicinal purposes. Today it’s one of the only places in North America one can find both wolves, and grizzly bears.

For the 150th anniversary, the National Parks Service is hosting events all year to commemorate, celebrate, and teach, everything to do with the majesty of the park.

81 years ago today, Captain America was first published by Timely Comics, which became Marvel in the 1960s. Created by cartoonists Joe Simon and Jack Kirby, their character was a patriotic super-soldier who often fought the Axis powers of World War II—and it was hugely popular during the wartime period. The series was discontinued in 1950, but Marvel revived it in 1964, and it’s remained in publication ever since.

Dressed in stars and stripes and wielding an indestructible shield that he throws as a projectile, the superhero is the alter ego of Steve Rogers, a frail young man who was enhanced to the peak of human perfection by an experimental “super-soldier serum” after joining the military to fight in WWII. When the war ended in the 1940s, Rogers became trapped in ice and survived in suspended animation until he was revived in modern times. A highly respected man, Captain America became the long-time leader of The Avengers.

In Simon’s autobiography we learn that Captain America was consciously a political creation because he and Kirby were appalled by the actions of Nazi Germany and they wanted to voice their views to the vocal anti-war contingent in the US. (1941)

Happy 53rd Birthday to the diverse Spanish actor Javier Bardem who won an Academy Award for his portrayal of an evil villain in No Country for Old Men, but also equally delivered when he played a romantic lover in Eat, Pray, Love. (1969)

His 2001 film A Beautiful Mind won the Academy Award for Best Picture and earned Howard the Oscar for Best Director. Among his many films, he directed Apollo 13, Cocoon, The Paper, Backdraft, The Da Vinci Code, and How the Grinch Stole Christmas. (1954)

Happy 78th Birthday to Roger Daltrey, singer-songwriter for The Who. The band’s co-founder put the stutter in My Generation, and the scream in Won’t Get Fooled Again, and always swung his microphone in wide circles like a Pinball Wizard with a lasso.

He grew up with schoolmates–and band mates–Pete Townshend and John Entwistle in a working class suburb of London. His first guitar was one of his own creations; he carved an imitation cherry red Stratocaster from a block of wood.

Check out The Who music on Amazon and WATCH their Super Bowl performance in 2010, minus the scream of his youth, but including the rock classic, “Baba O’Riley”… (1944)

212 years ago today, the pianist Frederic Chopin was born in Poland. The child prodigy became a virtuoso and composer who maintained his worldwide renown as a musician whose “poetic genius was based on a professional technique that was without equal in his generation.” At 21, he settled in Paris, writing primarily for solo piano and supporting himself by selling his compositions and giving piano lessons, for which he was in high demand as an innovator of the Romantic era.

In the last 18 years of his short life—in poor health until he died at age of 39—the maestro Chopin lived reclusively, giving only 30 public performances, but was admired by contemporaries such as his friend Franz Liszt and Robert Schumann. His most famous piece is the heroic Polonaise In A-Flat Major, Op. 53. Watch a rendition of the difficult polonaise that has garnered almost 3 million views on YouTube. (1810)