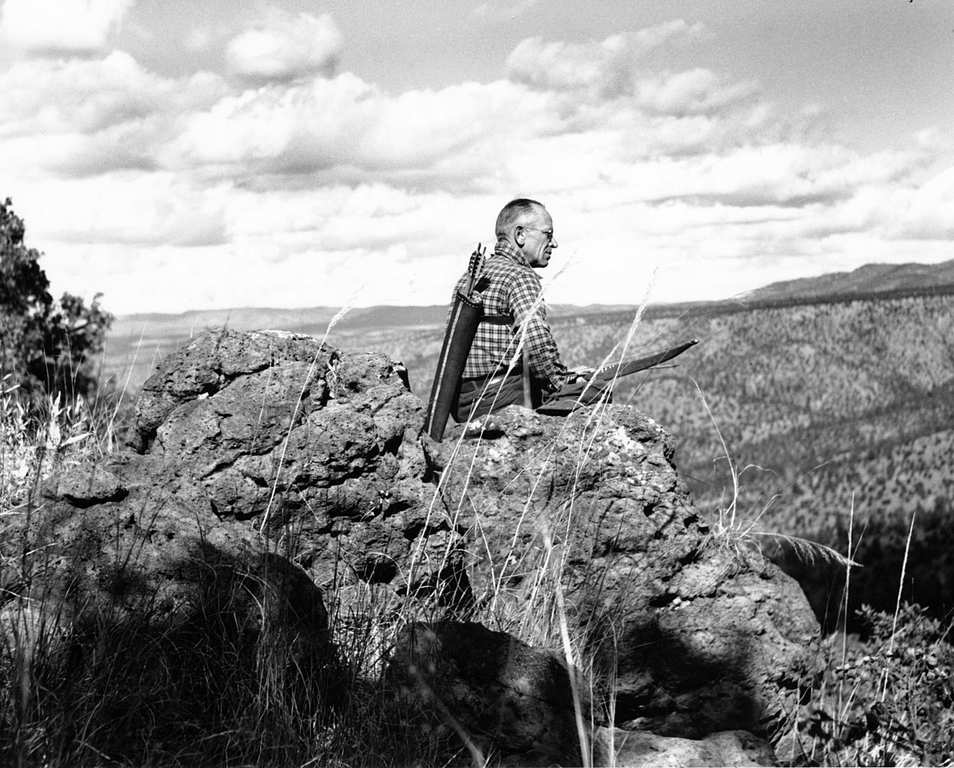 135 years ago today, Aldo Leopold, one of the godfathers of American land and wildlife management was born. Coming of age at the turning of the century, Leopold’s writing and philosophy towards nature would advance the budding American sense of conservation into a fully-developed discipline of naturalism. His book, A Sand County Almanac and Sketches Here and There, written about a month-by-month year in the life of farming on his 80-acre plot of land in Wisconsin, has sold more than two million copies worldwide across 14 languages, lay the groundwork for the modern permaculture and regenerative agriculture movements, and the adopted-Wisconsinite also helped found the Wilderness Society which has gone on to help protect 111 million acres in the U.S. READ his revolutionary ideas that changed the country… (1887)

– PHOTO CREDIT: Aldo Leopold with quiver and bow seated on rimrock above the Rio Gavilan in northern Mexico while on a bow hunting trip in 1938.

His school headmaster wrote that young Leopold was “as earnest a boy as we have in school… painstaking in his work…. Moral character above reproach.” His star is embedded in the constellation of characters that created modern America’s relationship with her land. He attended Gifford Pinchot’s forestry school, became a member of Teddy Roosevelt’s and George Bird Grinnell’s Boone and Crocket Club, and spent a long career in the Forest Service in New Mexico and Arizona where his memory enjoys a wilderness area named in his honor.

In Leopold’s essay The Land Ethic he became the first naturalist to lobby for the replenishment of America’s predators at a time when they were hunted to prevent livestock losses. His book Game Management proposed many of the ideas with which America has created the most prolific populations of game species, and the fairest and most sustainable hunting culture, on the globe.

“Harmony with land is like harmony with a friend; you cannot cherish his right hand and chop off his left. That is to say, you cannot love game and hate predators… The land is one organism,” he wrote.

And on this day in 1908, a steep-sided canyon carved by the Colorado River for two billion years was established as the Grand Canyon National Monument by President Theodore Roosevelt after he visited the awe-inspiring site seven years earlier. 277 miles long (446 km), and over a mile deep (1,857 m), the Grand Canyon in Arizona, exposes layer after layer of geological history. The Pueblo people considered the canyon a holy site, and it was viewed by the first European in 1540— García López de Cárdenas.

And, 58 years ago today, the Surgeon General of the U.S. released a landmark report which concluded that smoking likely caused lung cancer and other diseases. The announcement shifted attitudes toward tobacco and led to a 50 percent drop in the number of American smokers. One year later, prominent health warning labels were required on all cigarette packaging and advertising.

Surgeon General Luther Terry, a doctor from Alabama serving under President Kennedy, organized and chaired a panel of medical doctors and researchers to make recommendations in the United States, following an alarming 1962 UK report that clearly described smoking as a cause of bronchitis, cancer, and likely cardiovascular disease. (1964)

82 years ago, Sergei Prokofiev’s ballet Romeo and Juliet premiered in its full version in Leningrad. Originally the music was conceived with a happy ending, and his modernist approach to Shakespeare’s classic tragedy provoked controversy among Soviet cultural officials, who criticized him and other modernists (like Shostakovich) as degenerates.

But they did approve of how the ballet followed the precepts of ‘drambalet’, an innovative dramatized dance form, promoted by the Kirov dance company. The 1940 production at the Kirov (now Mariinsky) Theatre received international acclaim and was awarded the Stalin Prize.

The composer (who also wrote Peter and The Wolf) uniquely used the tenor saxophone, as well as mandolins to add an Italian flavor, which contributed to Romeo and Juliet becoming one of the most popular ballets of the twentieth century. The happy (at least, less tragic) ending reflected Prokofiev’s devout faith in New Thought, particularly Christian Science, in its “life-affirming” celebration of the perfection of life on its own terms. In 1955, the film version of this production was nominated as Palme d’Or in the 1955 Cannes Film Festival. WATCH the brilliant balcony scene by Angel Corella and Alessandra Ferri, choreographed by Macmillan. (1940)