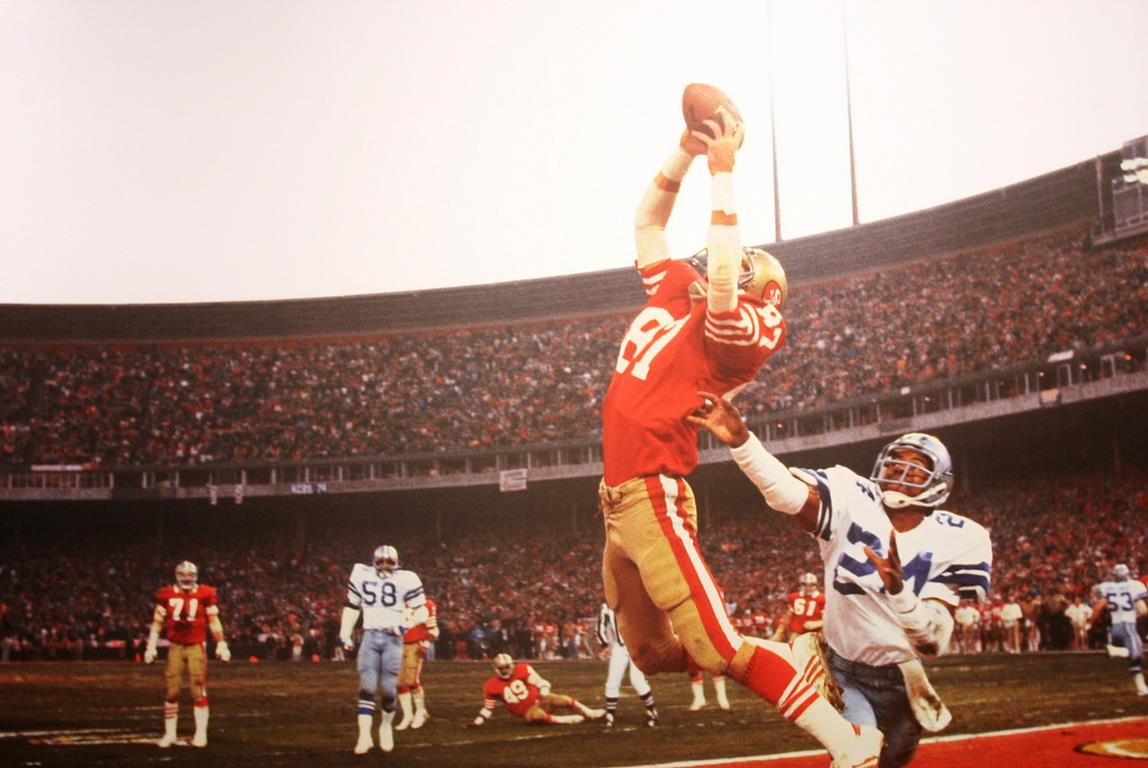 40 years ago, “The Catch,” arguably the most iconic play in NFL history was completed to seal a remarkable 28-27 victory over the Dallas Cowboys with less than a minute remaining. Under pressure from 3 opposing players, San Francisco 49ers quarterback and sport legend Joe Montana manages to get off a throw to find Dwight Clark in the Endzone. “The Catch” in the 1981 NFC Championship would see the 49ers advance to and win Super Bowl XVI; the first in franchise history.

It came at the end of a 14-play, 83-yard drive engineered by Montana, and marked the beginning of the 49ers’ rise as an NFL dynasty in the 1980s, where they made the playoffs 8-times, and going on to win three more Super Bowls, the most of any team during that decade. WATCH the iconic play… (1982)

The play becomes all the more extraordinary in the examination of it, as it essentially began disastrously. Wide receiver Freddie Solomon, who was responsible for most of the catches during the scoring drive, slipped after the play began, allowing the Cowboys perfect coverage of him. Furthermore, the offensive line collapsed, and seconds into the play Montana had defensive ends Ed “Too Tall” Jones and Larry Bethea, as well as linebacker D.D. Lewis pushing him out towards the sidelines.

A pump-fake bought Montana enough time to make a leaping throw which connected with a leaping Clark, who was subsequently shown in an iconic photograph of the play to have secured the ball with little more than his fingertips. “I saw Dwight’s feet touch the ground. I heard the crowd scream,” said Montana to Sports Illustrated, who didn’t actually see Clark make the catch.

NOTE: CLICK TO VIEW THE VIDEO ON YOUTUBE (as it is not able to be shown on other websites)…

Happy 74th Birthday to Steely Dan co-founder Donald Fagen, whose vocals, keyboards, and songwriting talents have, for decades, merged the intricacies of jazz with his perfect pop sensibility. Steely Dan’s 2000 LP Two Against Nature won a Grammy for Album Of The Year, and Fagen’s solo album Nightfly became a cult classic. From the hit single, Reeling In The Years, to the smooth and complex sounds of Aja (and the LSD anthem Kid Charlemagne), the Passaic, New Jersey musician deserves two-thumbs-up for his brilliant body of work.

As an author, Mr. Fagen penned the book, Eminent Hipsters, writing about the cultural figures that shaped his artistic sensibility, and offering a look at his college days and a hilarious account of life on the road. Already known for his literate song lyrics and elaborate arrangements, Fagen proves himself am equally sophisticated author. (1948)

26 years ago today, King Hussein of Jordan arrived in Israel’s largest city for his first public visit. The king, who is also a pilot, flew a helicopter to Tel Aviv for the ceremony honoring the successful negotiators of the 1994 Israeli-Jordanian peace talks.

Thousands of Israelis turned out to give Hussein an enthusiastic welcome, waving Jordanian flags and signs written in Arabic. The peace talks were controversial for both Hussein and Israeli Prime Minister Simon Peres, but went a long way toward establishing peace between the two Middle Eastern countries. The negotiations were also spurred through personal diplomacy from U.S. President Clinton. (1996)

Happy Birthday to the raspy-voiced British singer–songwriter Rod Stewart who turns 77 today. His fame goes all the way back to his first hit, Maggie May, with its striking mandolin sound, steeped in warmth. The long list of hit songs that followed earned ‘Rod the Mod’ the #59 spot on Rolling Stone magazine’s 100 Greatest Singers of all time—and made him one of the best-selling music artists of all time, with sales of over 120 million records worldwide.

Stewart toured North American in 2019—and in 2020 had planned to continue his residency at Caesars Palace in Las Vegas to promote his latest studio album, You’re In My Heart: Rod Stewart With The Royal Philharmonic Orchestra. The LP is a retrospective of revamped versions of his classic songs, that use original vocal tracks atop new symphonic arrangements.

He’s got plans for another album that would contain country tunes, folk music, and “older stuff” that helped shape him growing up. WATCH Ronnie Wood join him on stage (his old bandmate from The Faces) for two of his big hits… See more songs from the fine concert series below, on YouTube. (1945)