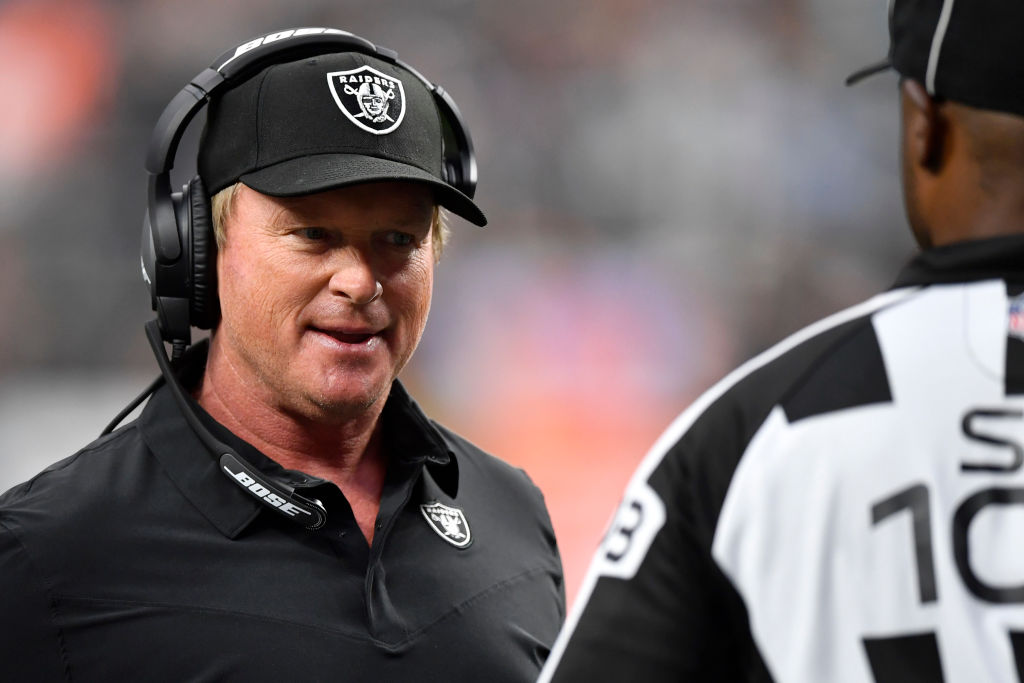 (NewsNation Now) — When he read the leaked emails from now-former Las Vegas Raiders coach Jon Gruden, a player with three different teams in the National Football League had a succinct reaction.

“Jon didn’t leave anybody out,” Ken Jenkins said on NewsNation’s “The Donlon Report.”

Gruden resigned Monday night after The Wall Street Journal and New York Times uncovered emails he sent over the last decade that included racist tropes and homophobic and misogynistic language. He coached his final game Sunday, a loss to the Chicago Bears, and said after the game he was “not a racist.”

After he resigned, he released a statement saying he “never meant to hurt anyone.”

Jenkins believes Gruden fit in with the culture of the NFL.

“This has been a culture of toxic masculinity for years, and years and years,” he said. “And it appears that the leadership of these teams and these organizations can get away with just about anything. It’s the boys club.”

The emails came from a separate investigation into the Washington Football Team. After reports of a toxic team workplace by The Washington Post in 2020, the team and league hired attorney Beth Wilkinson to investigate the culture there. The emails Gruden sent were found as part of that investigation.

Her report was summarized just before July 4 this summer, but the emails she collected were never made public.

The source of the leaks have not been confirmed, and an NFL spokesperson told The Associated Press they did not provide any emails to the press, and would not do so now.

“Based on the material that we have reviewed, we haven’t identified anything that needed to be reported to club or league leadership,” NFL spokesman Brian McCarthy told The Associated Press on Tuesday. “We have released no emails during this process.”

The fallout continued Tuesday, when the Tampa Bay Buccaneers, the team Gruden led to a Super Bowl title nearly two decades ago, removed him from the Ring of Honor at Raymond James Stadium.

“The Tampa Bay Buccaneers have advocated for purposeful change in the areas of race relations, gender equality, diversity and inclusion for many years,” the Bucs said in a one-paragraph statement. “While we acknowledge Jon Gruden’s contributions on the field, his actions go against our core values as an organization.”

Despite the league’s pledge not to probe those emails for further offensive speech, Jenkins is not sure the fallout is done.

“If I was on one of those email streams, I’d be a little nervous right now.”