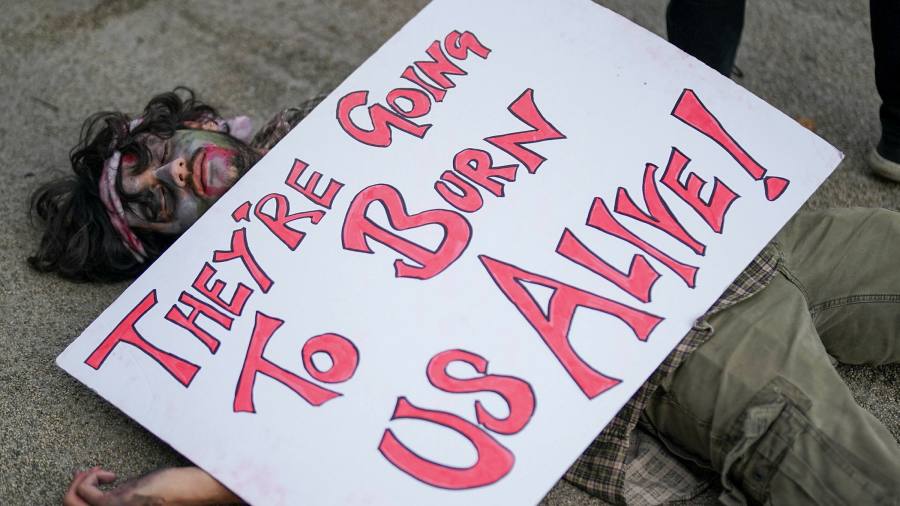 This article is an on-site version of our Moral Money newsletter. Sign up here to get the newsletter sent straight to your inbox.

Few of those attending COP26 stand to gain as much from the emerging low-carbon economy as Pat Brown, the founder of Californian plant-based meat group Impossible Foods. And few are prepared to speak so bluntly about the challenges the world will face in that transition.

When we met for coffee at a Glasgow hotel yesterday, Brown said he shared the frustration of young activists such as Mitzi Jonelle Tan and Dominika Lasota, who were featured in Moral Money last week.

“This is their future,” said 67-year-old Brown. “People of my generation are like, ‘By the time this bites us in the butt, we’ll be dead’.”

Brown, whose company is rumoured to be planning a $10bn flotation, has said he wants plant-based meat substitutes to make the US beef industry completely obsolete by 2035. In a new scientific paper, the long-time university academic explores how converting animal pasture back to woodland could have a powerful and fast-acting impact on slowing global warming.

To help drive that and other badly needed changes, Brown said, an effective global carbon market was required. But he saw little movement towards it at COP26 — including in addressing what he considers the parlous state of the carbon offset sector, which is used by a growing number of big corporations.

“Right now, any scammer can create and sell carbon credits,” Brown said. “It makes the value of that system approximately zero.”

Serious action on setting standards for an effective carbon market is, according to Brown, just one of many uncomfortable challenges that are being ducked by powerful political and business leaders in Glasgow this month. “Their main goal at COP is to emerge as undisrupted as possible,” Brown said. “What is needed is radical change, and fast.”

Read on for Gillian’s inside take on the progress — or lack of it — towards that change during the first week of COP26, and what to look out for during the second. Simon Mundy

Do you feel COP’d out? After a week of intense discussions — and protests — in Glasgow, some participants might mutter “yes”. Particularly since we are now dodging gloomy Scottish drizzle. But last week produced some important news: a deal to cut coal use (albeit watered down, and without significant players such as China, US and Australia); an agreement to reduce methane emissions; pledges on deforestation; and the announcement of a $130tn private sector capital alliance for decarbonisation.

All these developments will spark more debate this week, since the devil will be in the green detail of these pledges. But keep your eyes on these five issues too:

In the past year, financial luminaries such as Bill Winters, chief executive of Standard Chartered bank, and Mark Carney, former Bank of England governor, have pushed to make the carbon offset market more credible. This is badly needed since the industry faces serious questions over its fitness for purpose and the corporate world will need to use it to have any chance of hitting net zero. Its success will depend partly on whether countries can agree this week on a UN plan to create a uniform global offsets trading market, in line with Article 6 of the Paris climate change accord. Watch this closely.

Going into COP26, a coherent global approach to carbon prices and taxes seemed off the table since Joe Biden’s US administration has dragged its feet for domestic political reasons. But after listening to the conversations in Glasgow, it is clear that there is broad-based — and rising — support for this idea. It was also highlighted in a recent G20 statement for the first time. Watch this conversation, since (if nothing else) it might give a hint of more substantive discussions in the next COP.

Transport is on the agenda midweek, along with mining and other industrial sectors. Watch this for clues about what is driving investment trends there.

The final deal on different national emissions cuts is still being hotly negotiated and may not emerge until the end of COP26 on Friday. Last week some progress was made, with a collection of countries agreeing to cut coal use. The Energy Transitions Commission reckons that pledges made thus far will cut annual emissions by 9bn metric tonnes of carbon dioxide each year by 2030. But that is not enough to “keep 1.5 degrees alive” (referring to the idea that global warming must not be allowed to exceed that level), and China and the US continue to make fewer promises about emission cuts than activists (and scientists) would like to see.

Emerging market countries expressed fury last week that rich countries failed this year to honour an earlier pledge to provide $100bn in aid for decarbonisation annually between now and 2025. Rich countries say they will do this after 2023 and the British government has tried to soften the blow by highlighting net-zero commitments from a new alliance of big financial groups with $130tn of assets. But nobody quite knows what will happen to that $100bn pledge when it runs out in 2025. Nor is it clear how that $130tn commitment will play out. The situation is akin to somebody plugging an end destination into GPS, while waiting for the route to show up on the screen.

Quote of the day

There are more COP26 delegates who work for or represent the fossil-fuel industry than from any single country, the BBC reported.

Global Witness found that 503 people with links to fossil fuel interests had been accredited for the climate summit.

“The presence of hundreds of those being paid to push the toxic interests of polluting fossil fuel companies, will only increase the scepticism of climate activists who see these talks as more evidence of global leaders’ dithering and delaying,” said Murray Worthy, gas campaign leader at Global Witness. “There is no time for us to be diverted by greenwashing or meaningless corporate promises not matched by delivery. It’s time for politicians to show they are serious about ending the influence of big polluters.”

Beyond Glasgow: The worldview

Finally, after months of wrangling, the landmark US infrastructure bill is finished, leaving many Washington Democrats hungry for something green to chew on next.

US leaders will try to give a final jolt to COP26 this week with US House Speaker Nancy Pelosi and former president Barack Obama scheduled to attend. These A-list attendees arrive in Glasgow days after Congress voted to adopt President Joe Biden’s $1.2tn infrastructure package.

The bill is viewed as an appetiser to the larger, “Build Back Better,” package that will dedicate more funds for climate-specific projects. The White House on Sunday immediately shifted to advocating for the next course on the menu.

“What is in our minds is the fact that the Build Back Better plan that we’ve been talking about has the largest investment in American history to get us to a clean energy economy, to create millions of jobs in this country moving forward to sustainable, renewable energy,” White House chief of staff Ron Klain said on Meet the Press on Sunday.

“President Biden was in Glasgow,” Klain said. “The presidents of Russia and China were not. We are going to lead the world in tackling climate change. We’re going to pass this bill and have the tools to do it.”

But that is easier said than done. Moderate Democrats are hesitant to advance trillions of dollars more in federal spending, especially after the party suffered defeats in local elections this month.

“The responsible thing to do when you get a piece of legislation like this is to do a full analysis and to understand the impact on your district and the families in your district,” Democratic congressman Josh Gottheimer said on CNN on Sunday.

COP26 might be a world away, but it is reverberating in Washington. Climate demonstrators have congregated outside the Capitol for a hunger strike to press Senator Joe Manchin and other moderate Democrats to act on climate legislation.

It remains to be seen how continued pressure on the recalcitrant Democrats will affect them. Team Biden has reasons to be optimistic. Pressure could compel moderates to agree on something, however small, so that the climate scrutiny they are facing dies down in 2022. Democrats will want to present a unified front to voters ahead of midterm elections 12 months from now. Food for thought. Patrick Temple-West

Scoreboard — Key news and analysis behind the business decisions in sport. Sign up here