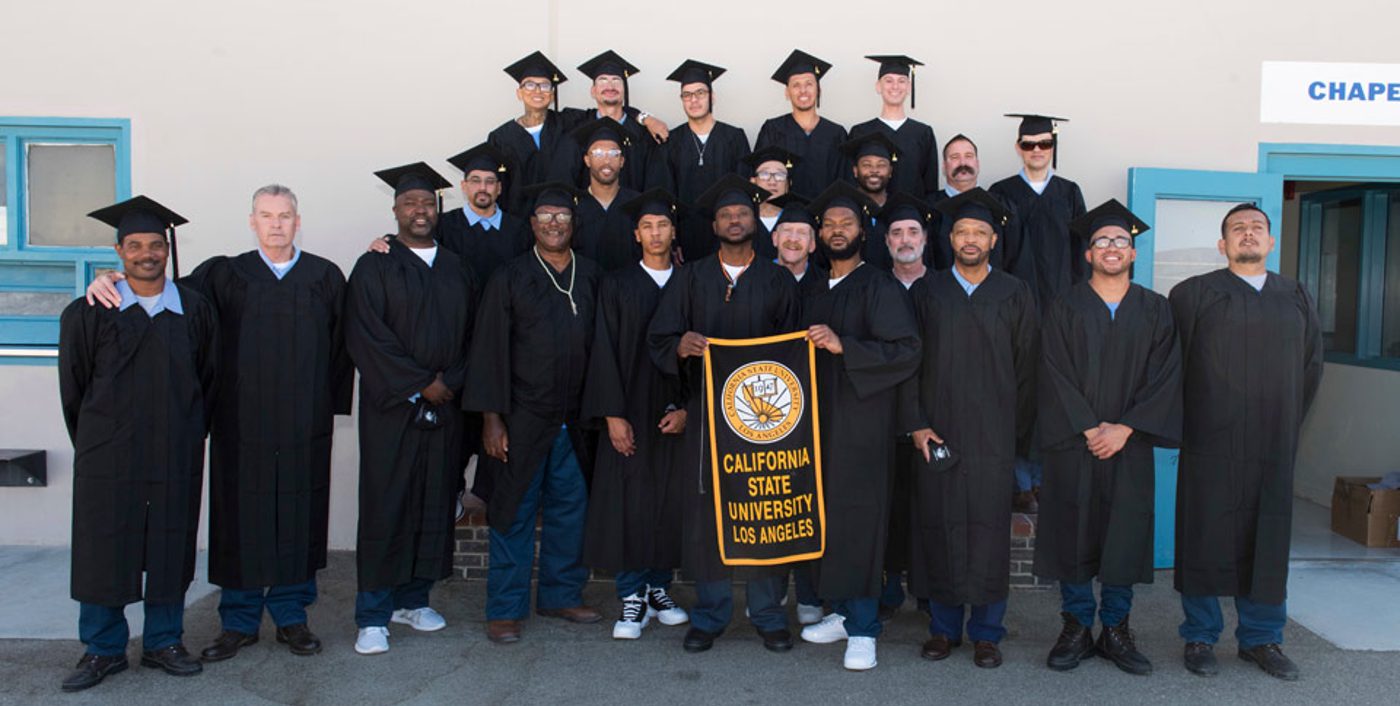 On a prison yard 70 miles away from Cal State LA’s campus, the university celebrated its newest graduates.

“Today, an education to me, means freedom, redemption, and opportunity,” graduate Dara Yin said during his student address at the ceremony. “The freedom to create better lives. A redeeming quality in the sense that we can step out of an identity that was destructive and into the person our mothers always meant for us to be. The opportunity to show that we are not our worst decisions, that we crave to be a part of the larger society so that we can put to use our unique combination of lived experience and education.”

Cal State LA’s Prison B.A. Graduation Initiative is the first in-person bachelor’s degree completion program for incarcerated students in California. It was started in 2016 with support from President Barack Obama’s Second Chance Pell federal pilot program and is also supported by the Andrew W. Mellon Foundation. Through the program, the students earned a Bachelor of Arts in Communication, with a focus on organizational communication.

The graduates wore black caps and gowns over their blue prison uniforms at the October 5 outdoor ceremony on the yard of the prison’s progressive programming facility (PPF). PPF is a voluntary program that houses men who demonstrate good conduct and a dedication to personal growth.

Friends and family of the graduates gathered with officials from the California Department of Corrections and Rehabilitation (CDCR) and Cal State LA faculty, staff, and administrators to celebrate the graduates.

“I am struck by the resilience and dedication you have demonstrated as you embarked on your educational journey,” Cal State LA Provost and Executive Vice President Jose A. Gomez said to the graduates. “You didn’t give up, you didn’t quit. I speak for everyone at Cal State LA—the faculty, staff, administrators, alumni, and our community—when I say that we are so proud of you.”

Professor David Olsen, chair of the Department of Communication Studies, served as emcee for the ceremony, which featured moving student speeches and performances, as well as remarks from CDCR leaders.

“This program is so unique—it is one of the only of its kind in the country and the nation has been watching you,” said Brant Choate, director for CDCR’s Division of Rehabilitative Programs. “Because of your efforts, you have set the stage and example that this works. This opportunity is going to be available to thousands in the future in California and across the country. Thank you for all you’ve done.”

Choate noted the likely expansion of prison education programs following a move by the federal government to allow incarcerated students to apply for federal Pell Grants to pay for higher education.

During the ceremony, five of the graduates performed a piece they wrote, directed, choreographed, and rehearsed under the guidance of Cal State LA Professor Kamran Afary.

Titled When I Becomes We [Ubuntu], the men used spoken word, rhythmic language, and movement to explore their personal transformations and experiences completing their degrees during the COVID-19 pandemic.

Afary watched proudly from the audience as the graduates performed. “I am overjoyed and so emotional today,” said Afary, who is one of the 15 faculty members in the Department of Communication Studies who taught the students during their time in the program. “It’s been a wonderful journey and an honor to have been able to watch them grow.”

Drawing on expertise from across the university, Cal State LA’s pioneering prison education initiative is a collaboration between the university’s Center for Engagement, Service, and the Public Good, the Department of Communication Studies in the College of Arts and Letters, and the College of Professional and Global Education.

CHECK OUT: As Incarceration Rate Falls, U.S. Prisons Are Being Repurposed into Homeless Shelters, Farms – Even Movie Studios

In July, the first nine graduates from Cal State LA’s Prison B.A. Graduation Initiative were able to participate in commencement ceremonies on the Cal State LA campus. All had their life sentences commuted by Gov. Jerry Brown or Gov. Gavin Newsom, or were released due to changes in the law.

Several attended Tuesday’s ceremony, returning to Lancaster to watch their friends and former classmates earn their degrees. It was Tin Nguyen’s first time stepping foot on the yard since he was released on a rainy December morning in 2019. When he entered the prison’s gates again on Tuesday, he said he felt like throwing up.

But his anxiety quickly turned to elation. Under bright sunshine and blue skies, Nguyen felt joy seeing his friends achieve their accomplishments.

“Look at us now,” Nguyen said. “We are transformed men—assets to society both in here and out there. I am proud of them and so amazed at how far we have come.”

“Other schools prepare you to execute a task,” said Samuel Nathaniel Brown, one of the graduates who received their degrees this week. “This school prepared us to change the world.”

Brown co-founded, with his wife Jamilia Land, the Anti-Violence, Safety, and Accountability Project (ASAP), which aims to dismantle systemic racism and end the cycle of violence in communities.

After being incarcerated for over two decades, Brown will soon become the thirteenth student in Cal State LA’s prison education program to be released from prison.

During the ceremony, Brown and his fellow graduates crossed a stage in their caps and gowns with their heads held high as their names were read. Gomez congratulated the Class of 2021 and instructed them to turn their tassels from the right to the left, marking their symbolic transition to university graduates. Of the 25 names called, two were not present at the ceremony because they had been transferred to another facility.

MORE: Baking Bad: Ex-Cons Are Mentored as Bakers and Now Their Bread is in the Best Restaurants

By the end of fall, 37 incarcerated and formerly incarcerated students in Cal State LA’s B.A. program will have earned their bachelor’s degrees. Some have enrolled in master’s degree programs in communication studies and counseling, others have started businesses or are giving back to their communities through nonprofits. All want to strive to make the world better.

At the closing of his remarks, Yin challenged his fellow graduates to consider their degrees as just the beginning.

“Imagine what else we could do? Find the answers to poverty? Homelessness? Help rebuild our K-12 schools? Put an end to kids joining gangs,” Yin asked. “Impossible? Not if you ask us.

Imagine if those answers are here among the incarcerated—among those that have changed and reclaimed their positive standing in society. Imagine that it starts today.”