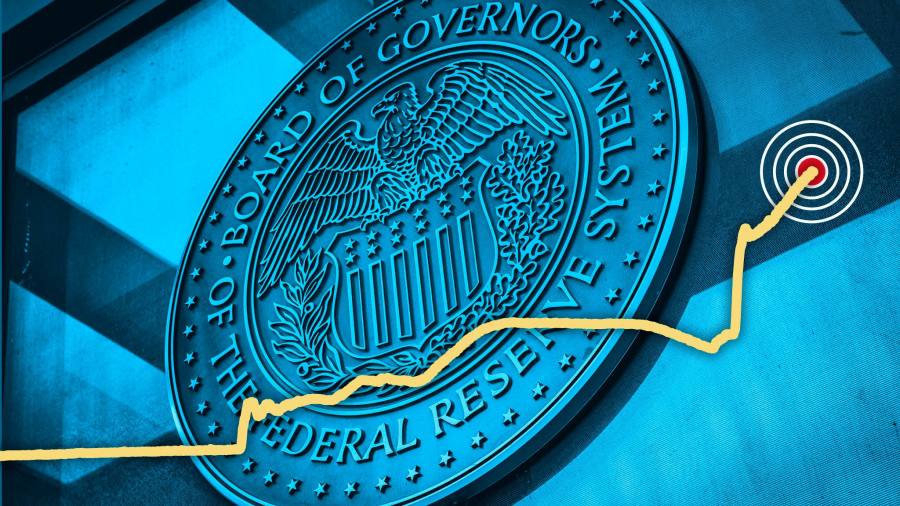 The Federal Reserve has begun sketching out plans to shrink the size of its balance sheet, which ballooned during the pandemic as it hoovered up government bonds in an attempt to stave off an economic collapse.

The US central bank now holds just under $9tn of assets, more than double the amount compared to early 2020 when it embarked on an unlimited bond-buying programme to prop up markets and lower long-term borrowing costs for business and households facing financial ruin.

Minutes from the Fed’s policy meeting in December, released last week, revealed that policymakers had embarked on their most comprehensive discussion to date of how they intend to manage the process of trimming the size of the balance sheet.

The minutes, which also showed that officials thought the Fed might need to raise interest rates “at a faster pace” than originally anticipated, has since triggered sharp moves in financial markets as investors become more attuned to the central bank’s abrupt pivot to a tighter monetary policy.

This week, real yields — which are derived from Treasury securities adjusted for inflation — surged to their highest level since June as traders prepared for cuts to the Fed’s balance sheet. Real yields affect every corner of financial markets, and factor into equations investors use to value assets from stocks and bonds to real estate.

Here is a guide to how the Fed might manage the process of reducing its portfolio of securities, and why it matters for markets.

Why is the Fed discussing its balance sheet now?

Under pressure to respond to soaring inflation, the Fed had already announced plans to withdraw the $120bn-a-month bond-buying programme it put in place at the onset of the pandemic.

The central bank expects to cease buying bonds in March, paving the way for it to start tightening policy by raising interest rates this year. A majority of Fed officials are now pencilling in three quarter-point rises this year, and a further five before the end of 2024.

Shrinking the balance sheet would be another way of curtailing the amount of stimulus the Fed is pumping into the economy, something officials think it must do given the jump in consumer prices and the strength of the recovery.

“It is becoming hard to justify why the Fed is keeping such a large balance sheet if the economy is doing so well,” said Roberto Perli, a former Fed staffer and head of global policy research at Cornerstone Macro.

What are the plans for reducing it?

The Fed has not yet made any final decisions on shrinking its balance sheet, but the account of the December meeting showed there is broad support for a relatively rapid reduction after the first interest rate rise.

The process should be swifter than the Fed’s previous attempt to pare back its holdings in 2017, which had swollen due to bond-buying after the global financial crisis in 2008.

Back then, the Fed waited for about two years after the first post-crisis rate rise before it stopped reinvesting the proceeds from maturing Treasuries and agency mortgage-backed securities (MBS), a process known as “run-off”.

The Fed thinks it can afford to move more quickly thanks to “a stronger economic outlook, higher inflation, and a larger balance sheet”, which contrasts with the relatively tepid recovery in the wake of the financial crisis.

Even after the Fed trims the balance sheet, it is likely to remain much larger than it was before 2008, according to Mark Spindel, chief investment officer at MBB Capital Partners. Spindel said the prospect of hacking it back to its pre-crisis size of less than $1tn was a ship that had “long sailed”.

Indeed, Fed officials support monthly caps that would limit how quickly run-off can proceed to ensure a pace that is “measured and predictable”, according to the minutes. Some also back a swifter reduction of the Fed’s holdings of agency MBS faster than its pile of Treasuries.

For now at least, Fed officials seem to be exclusively focused on shrinking the balance sheet by not replacing bonds that mature and do not appear to be discussing selling assets outright.

Why are markets on edge?

Although the Fed had announced the end of its bond-buying programme and telegraphed looming rate rises, the sudden discussion of its balance sheet caught investors off-guard.

The last time the central bank attempted to reduce the size of its balance sheet, it ended in upheaval as it became clear too much cash had been drained from the financial system.

In 2019, two years after it had begun to wind down its Treasury portfolio after the last crisis, short-term funding costs rocketed. Banks, which had partially filled the gap by buying Treasuries, were less willing to lend cash to overnight borrowing facilities, further exacerbating the situation.

The Fed was forced to intervene, pumping billions of dollars into the so-called repo market, and embarking on a series of monthly asset purchases.

Investors are not concerned about an outright repeat of the repo crisis, but whenever the Fed withdraws stimulus, it can have unintended consequences.

With its unlimited asset purchase programme, the Fed has left a sizeable imprint in the $22tn US Treasury market, the backbone of the global financial system. As it acquired US government debt during the pandemic, it became one of the largest owners of Treasury inflation protected securities, or Tips, depressing the yields deep into negative territory. It now single-handedly owns more than a fifth of the $1.7tn of debt.

If the Fed begins to sell those bonds, the supply of Tips in the market is expected to balloon, pushing their yields — known as real yields — up. That could reverberate in every corner of financial markets, given real yields are used as a marker by which almost every security in the US is priced.

Investors got their first glimpse of that last week, when real yields surged dramatically, triggering a sell-off in speculative tech shares that are highly sensitive to the rates. The move, which accelerated on Monday, weighed further on risky assets, with the technology-heavy Nasdaq sliding into a technical correction as it dropped 10 per cent from its all-time high.

“The single most important question for the market in 2022 was the outlook for real yields,” said Deutsche Bank’s George Saravelos. “It has been the ‘glue’ that has held the market regime together.”

Could it have an impact on Treasury market liquidity?

The primary block to a rapid reduction in the balance sheet is the resiliency of the Treasury market and its ability to function properly when its biggest buyer starts pulling back.

Fed officials recently indicated concern, highlighting “vulnerabilities” in the world’s most important bond market and how the weaknesses might influence the pace at which it retreats.

“Liquidity is not the same as it was 10 years ago,” said Priya Misra, head of US rates strategy at TD Securities.

The Fed has put new tools in place designed to mitigate potential problems, including a permanent facility that allows eligible market participants to swap Treasuries and other ultra-safe securities for cash at a set rate.

This standing repo facility, which was unveiled in July, is intended to serve as a backstop for the market and avoid a repeat of the volatility that occurred during the last attempt to shrink the balance sheet.