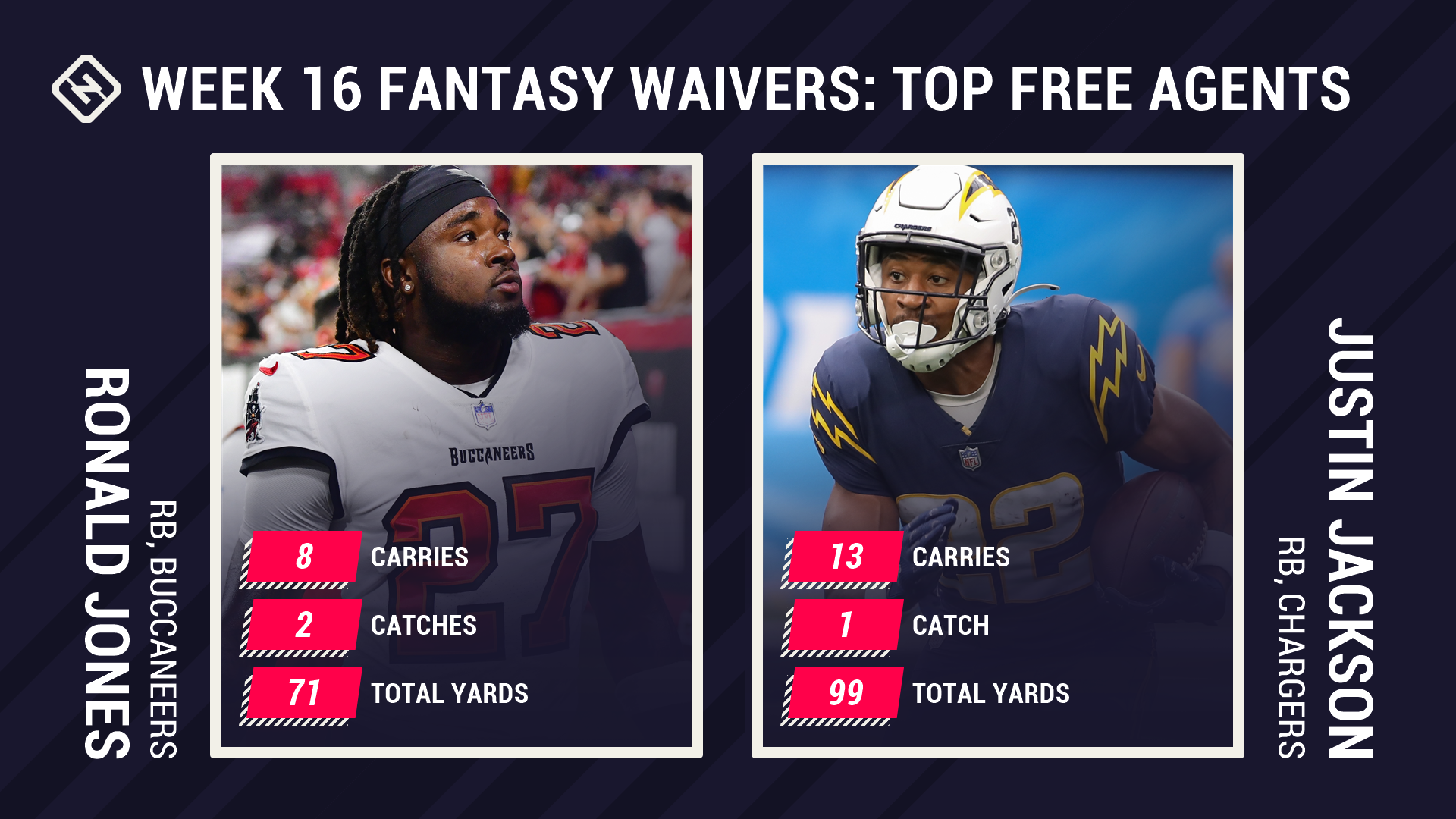 The good news is you’ve made the second round of the fantasy playoffs (and if you haven’t, stop reading this and celebrate that you’re out of this four-month prison we call fantasy football playoffs); the bad news is all of your players are injured or on the reserve/COVID list. Literally, every one. Even if you’ve somehow been spared, chances are you could tune up your roster with potential starting RBs Ronald Jones, Justin Jackson, and Samaje Perine or breakout WRs Amon-Ra St. Brown, Gabriel Davis, and Russell Gage. All will be among the top Week 16 fantasy waiver wire pickups and free agent adds, and plenty of streamers will be potential free agents to target after waivers clear around 4-5 a.m. ET on Wednesday mornings in Yahoo and ESPN leagues.

Our full free agent list is packed with said streamers at QB, WR, TE, and D/ST. We even have an RB streamer this week, if you can believe it. We also have a few more notable running backs and wide receivers, but this week is mainly about the streaming options, which can be found end of this list. If you wan to give yourself the opposite of an early Christmas present, check out our Week 16 kicker rankings.

Don’t bother worrying about which player should be the top waiver pickup — just grab whoever makes the most sense for your team. Jones is likely going to be the top claim in most leagues since he’s a clear-cut starting RB, but it’s possible you need a WR like Davis, Gage, or St. Brown. If so, grab them. You might want to play defense and pick up someone to block your opponent, but either way, you should be using your waiver claim. In fact, you should probably be using multiple claims. If there’s a player who might be more useful than a player you have, claim them instead of taking a chance in free agency.

Chances are, you will be making more pickups throughout the week as players wind up on the reserve/COVID list and injuries are revealed, so stock up while you can and adjust later.

Unless otherwise noted, only players owned in fewer than 50 percent of Yahoo leagues considered.

Ronald Jones, RB, Buccaneers. Leonard Fournette was “questionable” coming into Week 15 because of a sore ankle, and he wound up exiting in the third quarter of Sunday night’s game because of a hamstring injury. It’s possible, maybe even likely, he’ll miss at least Week 16 against Carolina. If he does, Jones will handle the bulk of the Bucs carries. He likely won’t see as many targets as Fournette does, but 15-plus carries and a handful of goal-line opportunities is enough to make Jones a solid RB2/flex. His Week 17 matchup against the Jets would have him solidly in the RB1 discussion.

Justin Jackson, RB, Chargers. Jackson had his best game of the season in Week 15, rushing 13 times for 86 yards and adding a 13-yard catch. Austin Ekeler was rumored to be on the reserve/COVID list on Monday, so Jackson could be in line for an even bigger Week 16 in a favorable matchup against Houston. It remains to be seen if Ekeler will play (or if Jackson will test positive at some point), but either way, Jackson is one of the most important handcuffs down the stretch and could have a flex-worthy role even if all of L.A.’s backs are active.

Samaje Perine, RB, Bengals. Bengals coach Zac Taylor said Monday that Joe Mixon suffered an ankle sprain and is “day to day.” He also expressed optimism that Mixon could suit up against Baltimore this week. Either way, If there’s even a question about Mixon’s availability, Perine will be in hot demand. He figures to see the bulk of the carries if Mixon is out, and he’s showed in the past he can produce when given the opportunity (see Week 16 last year when he had 136 total yards and two TDs on 17 touches.

Jordan Howard, RB, Eagles. Howard will play Tuesday for the first time since Week 11. Prior to his knee injury, he had been operating as Philadelphia’s 1A or 1B, averaging 12.8 carries and 68.5 rushing yards while scoring three total TDs in the four games in which he’s played. It’s unclear exactly how things will shake out in the Eagles backfield going forward, but Howard figures to at least be the goal-line/power option. He’s worth stashing in case he has a bigger role, especially with a favorable matchup against the Giants on tap for Week 16.

Marquez Valdes-Scantling, WR, Packers. There are better receivers on the waiver wire (see below), but MVS has one of the highest ceilings. He caught five-of-seven targets for 98 yards and a touchdown against the Ravens in Week 15, and since he’s had some stellar performances in recent weeks, he can be used as a boom-or-bust option heading into a matchup with the Browns. Cleveland is a decent defense against fantasy WRs, but MVS is the type of player who can be productive in any matchup thanks his QB and big-play upside. (Update: MVS was placed on the reserve/COVID list on Tuesday, and since the Packers play on Saturday, he’s unlikely to be ready. Allen Lazard should see a big uptick in targets.)