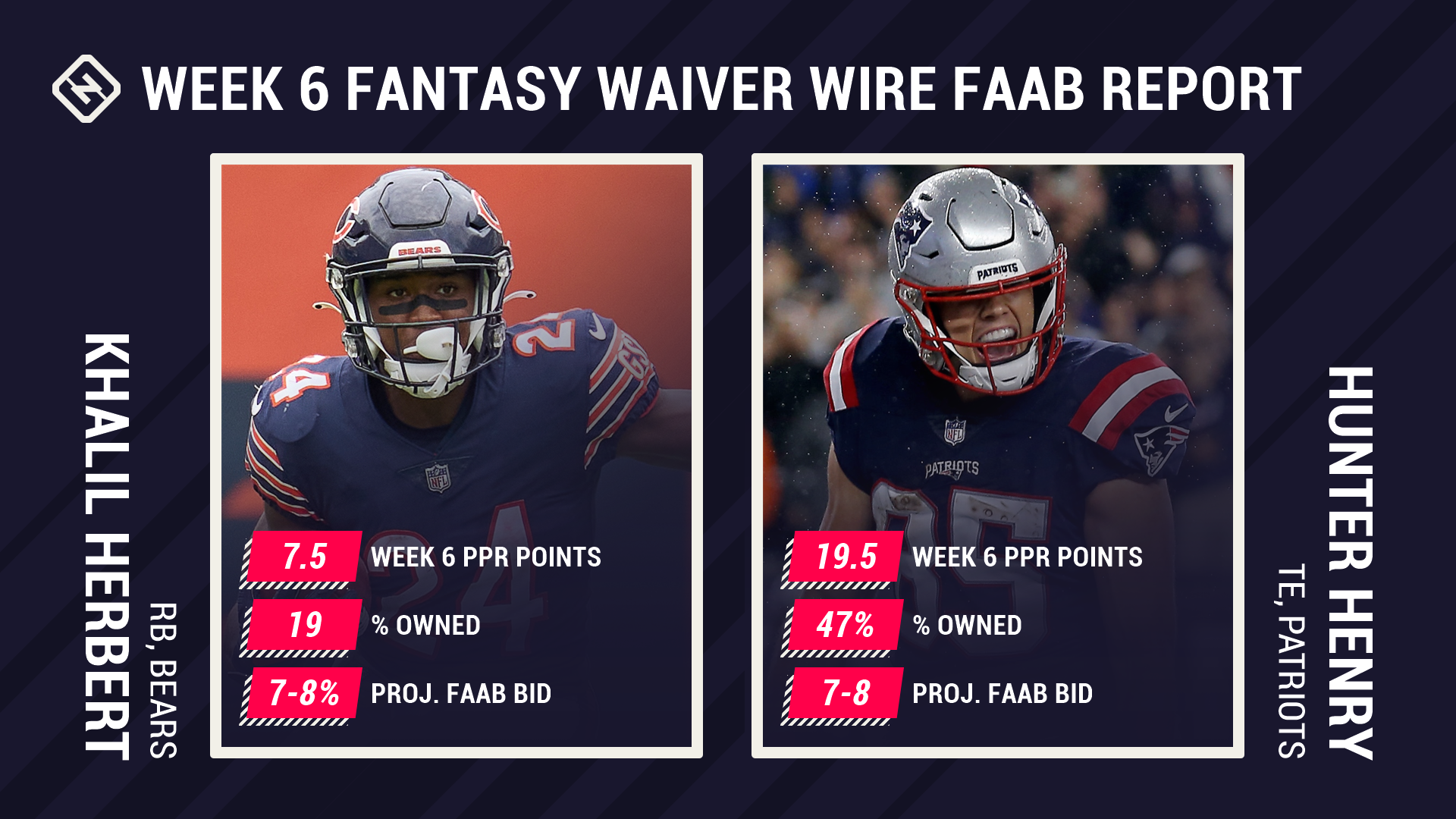 This is the type of waivers week fantasy football owners wait for. Several starting RBs are/were injured, paving the way for handcuffs to shine (Devontae Booker, Darrel Williams, Khalil Herbert, Rhamondre Stevenson), and several more players broke out/continued their breakouts (Kadarius Toney, Hunter Henry, Dan Arnold, Amon-Ra St. Brown). The top Week 6 waiver wire pickups are going to require some some high claims and serious FAAB bids, so you better have your budgets in order. You can find plenty of gold with free agent adds, too, but if you want the top guys, it’s going to cost you.

As we’ll do every week this season with the help of our friends at Fantasy Alarm, let’s break down the top pickups and project how much of your FAAB budget you should bid on them.

DOMINATE YOUR LEAGUE: Get the Fantasy Alarm NFL Season Pass!

Trevor Lawrence, (JAX). Depending on how desperate you are to fill this void, you might need to spend a little bit more on Lawrence. While most rookie quarterbacks are seeing their pass attempts limited, we’ve seen Lawrence become more efficient as a passer and offering rushing upside in his past two games. Jacksonville heads to London this weekend to face the Dolphins. Miami might not have the greatest pass rush, but they do have a solid secondary. However, the Jaguars should extend Lawrence’s leash in this matchup, and it’s possible he scores another rushing touchdown for the third straight week. He has upside after his Week 7 bye, too. Projected FAAB Bid: 7-12% of total budget

Ben Roethlisberger (PIT). There have been numerous jokes about how Big Ben looks like he’s in constant pain with every play he makes, and the loss of JuJu Smith-Schuster (shoulder) certainly hurts. But the Steelers will host the Seahawks in prime time this week, and the Seattle defense can’t get off the field. This could very well be a Najee Harris game, but against the Broncos we saw Big Ben put up 250-plus yards and a pair of touchdowns. You have to imagine he can do better against Seattle, which puts him in play as a streamer. Proj. FAAB Bid: 3-4%

Darrel Williams (KC). The running back position forces us to spend up on backups. It’s a position of opportunity, and when you have the chance to get touches in an offense like this, then you’re going to come at a price. Clyde Edwards-Helaire (knee) is going to miss a few weeks, so the next man up would be Williams, who has plenty of familiarity with this offense. For what it’s worth, we could very well see the Chiefs go with a split backfield and get Jerick McKinnon, who can be had for much cheaper, some action. The game script wasn’t in Williams’ favor Sunday night, but he should get a good amount of the carries and goal-line work with CEH sidelined. Projected FAAB Bid: 15-18% of total budget

Devontae Booker (NYG). Saquon Barkley can’t catch a break. He was finally hitting his stride and rewarding fantasy owners before awkwardly rolling his ankle in Sunday’s game. It swelled up instantly, and he was carted off to the locker room. In lieu of Barkley, Booker received 19 touches and found the end zone. Was he efficient? Nope, but volume was there for him. Now the Giants are optimistic that Barkley might only miss one game. If that’s the case, we don’t need to throw a ton of FAAB at Booker, but we know this offense likes to utilize the running backs. We saw Wayne Gallman have success in this offense a year ago after Barkley tore his ACL. Booker could be a one-week rental, but if the injury lingers for Barkley, we have a decent flex option who will see plenty of volume. Proj. FAAB Bid: 10-15%

Khalil Herbert (CHI): Herbert wasn’t as “featured” Damien Williams was, but he still carved himself a nice role in lieu of David Montgomery (knee). He finished with 75 yards on 18 carries, and if looking at just the fantasy points, there may not have been many, but he simply didn’t find the end zone. It’s easier to predict touches than touchdowns, and while he won’t get 18 carries going forward, if he’s getting 10-12 in a timeshare with Williams, then he deserves to at least be rostered. Proj. FAAB Bid: 7-8%

Rhamondre Stevenson (NE). Damien Harris might have avoided a serious injury, but even after he returned, Stephenson was still being utilized. Stevenson was a star in the preseason, and we know this is a team that isn’t afraid to mix things up in the backfield. Harris hasn’t been overly impressive as the lead running back in this offense, and while Harris’s job might not be at risk (yet), it could benefit the Patriots to give more carries to the rookie. He didn’t do much with Sunday’s workload, but keep in mind, the Patriots offensive line was missing four starters. It’s also worth mentioning that Brandon Bolden, who was mentioned last week, is still the preferred target in PPR formats. Proj. FAAB Bid: 6-7%

Kadarius Toney (NYG). Toney’s a special talent, and it was on full display in Week 5. Everybody else was getting hurt before Toney got ejected for throwing a punch, but he had quite the breakout in Dallas. He caught 10-of-13 targets for 189 yards, and this is after he had nine targets last week. The injury to Daniel James (concussion) could hamper the overall production going forward, though. Additionally, there are other pass catchers in this offense, but they can’t seem to stay on the field. He’ll be the most popular wide receiver this week on the waiver wire, as he flashed that “week-winning” upside we so desperately seek out on waivers. Projected FAAB Bid: 20% of total budget

Amon-Ra St. Brown (DET). Quintez Cephus suffered a broken collarbone in Week 5, which should open things up for St. Brown (though you could make that argument for any pass-catcher in this offense). We haven’t seen T.J. Hockenson take off like most thought he would, and even he has gone on record saying that defenses are scheming for him and taking him out of the picture. So, on that note, St. Brown went on to lead the team in receiving on Sunday with seven catches on eight targets for 65 yards. This offense is a bit of a struggle and far from the most explosive on the field, but the injury to Cephus does give ARSB a bump for fantasy. Proj. FAAB Bid: 6-8%

Mecole Hardman (KC). Hardman’s upside is well documented. He offers great speed and big-play upside, but when you’re routinely behind Tyreek Hill and Travis Kelce for targets, you’re not much of a fantasy option each week. However, it seemed like everybody on Kansas City got hurt Sunday night. Tyreek Hill had a sore knee, Travis Kelce had a “stinger,” and we’ve already touched on the injury to Clyde Edwards-Helaire (knee). This opened the door for Hardman to see a dozen targets come his way. The only way this pays off is if there’s a long-term injury to either Hill or Kelce and that doesn’t appear to be the case, but it’s a situation to keep an eye on. Proj. FAAB Bid: 6%

Tim Patrick (DEN). He hasn’t found the end zone in his past three games, but the workload and opportunities have been there for Patrick. He’s scored double-digit fantasy points in four-of-five games in PPR formats, and he’s had 15 targets in his past two games. It still sounds as if Jerry Jeudy (ankle) is a few weeks away from returning, and if that’s the case then Patrick still has some flex appeal, especially against the Raiders, who don’t have the greatest secondary and will be playing under a new interim head coach. Proj. FAAB Bid: 4-5%

Hunter Henry (NE). At tight end, most players who you stream are going to be touchdown dependent. That’s unfortunate since touchdowns are the hardest statistic to predict, but Henry’s snaps and targets over the past few weeks are trending in the right direction. Jonnu Smith will still have his weeks where he’s involved, but Henry has found the end zone in back-to-back weeks and is coming off six catches for 75 yards in Week 5 against Houston. New England signed both Smith and Henry to respectable contracts in the offseason, so we can expect that they’ll both find a way to be involved going forward. Henry’s the one getting the love right now, though, so he’s worth more on the wire. Projected FAAB Bid: 7-8% of total budget

Dan Arnold (JAX). The Jaguars seemed pretty excited to acquire Arnold, who wasn’t getting enough usage out of him after they signed him in the offseason. Arnold led the Jaguars in arguably all receiving categories this past week, and remember, this was just his second game with Jacksonville. The Jags were eager enough to get him some activity in his first game after just trading for him a few days prior, and now he’s carving out a larger role for himself. If you missed out on Dawson Knox, this might be your shot at redemption. Proj. FAAB Bid: 7-8%

David Njoku (CLE). The concern with Njoku is mostly regarding Austin Hooper and Harrison Bryant (and, eventually, Jarvis Landry). We won’t be able to trust him on a week-to-week basis, but his snaps are trending in the right direction. Additionally, this is still a team that would prefer to run the ball. Sunday’s game script dictated being a little more aggressive through the air, and Njoku caught all seven of his targets for 149 yards and a touchdown. For whatever reason, Baker Mayfield and Odell Beckham Jr. can’t get on the same page, and it could be that defenses are scheming to take OBJ away. This is opening things up for others in the offense. Njoku’s seen at least 60 percent of the snaps each of the past three weeks, so hopefully that’s a trend we see continue. Proj. FAAB Bid: 3%

As we always caution, you shouldn’t spend more than one percent of your FAAB budget on a D/ST. Here are this week’s potential streaming pickups: