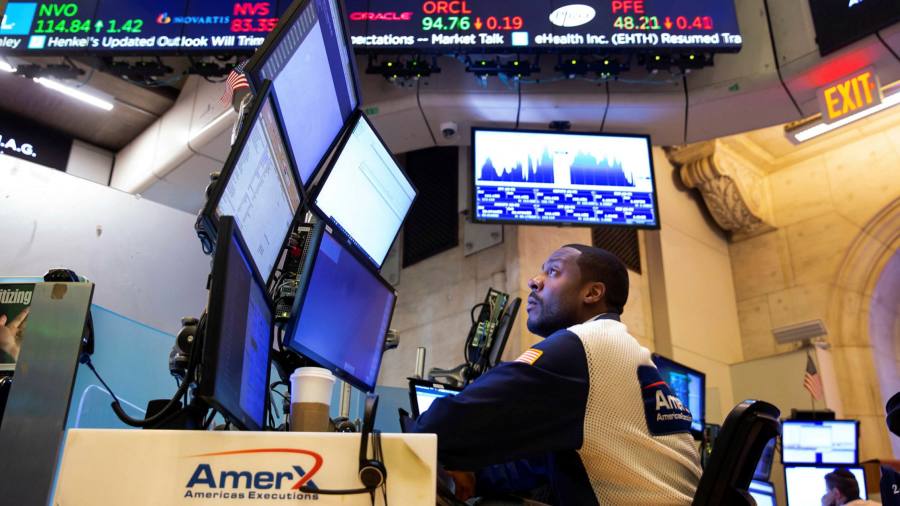 European equities and Wall Street stock futures drifted on Tuesday as a long winning streak for record-high stock markets was tempered by caution ahead of US inflation data.

The Stoxx Europe 600, which has closed higher for 13 of the last 15 trading sessions and hit its latest all-time high last Friday, was flat in early dealings.

Futures contracts on the US blue-chip S&P 500 share index, which on Monday closed out its longest unbroken series of record highs since 1997, also slipped 0.1 per cent lower. Elsewhere, London’s FTSE 100 fell 0.3 per cent and the Hang Seng in Hong Kong was 0.2 per cent higher.

Stock markets have rallied in Europe and the US during a better than expected third-quarter earnings season. The Federal Reserve, the world’s most influential central bank, has also signalled it will keep borrowing costs at record lows despite high inflation, providing a further boon to markets.

Figures on US wholesale inflation, due on Tuesday, are expected to show that prices at factory gates rose 8.7 per cent in October from the previous year, quicker than 8.6 per cent in September.

A more closely followed report due on Wednesday is forecast to show that US consumer price growth accelerated to 5.8 per cent in October from the same month last year, its highest level since 1990.

The pace of consumer price rises in the US has been running at 5 per cent or higher since May, far exceeding the Fed’s target of an average rate of 2 per cent.

Fed chair Jay Powell said last week that it remains too early in the economic recovery from the pandemic to raise interest rates to battle price rises, which the Fed has linked to supply chain bottlenecks, higher food prices and upward pressure on wages.

Investors tend to hold back from market bets ahead of new CPI data. Traders have for many weeks been assessing whether the rapid price increases will reignite debates over how soon the Fed will have to change its assessment that the situation is “transitory.”

“We’re all holding on to our hats ahead of the US CPI report,” said Gregory Perdon, co-chief investment officer at Arbuthnot Latham. “Its unsettling because it feels like it is no longer transitory.”

“What we’ve heard from companies so far is that underlying demand conditions are strong enough,” she said.

Government debt markets were also steady ahead of the US inflation report. The yield on the 10-year Treasury note, which moves inversely to the price of the debt and underpins borrowing costs and equity valuations worldwide, fell 0.02 percentage points to 1.481 per cent.

Germany’s equivalent Bund yield was flat at minus 0.252 per cent, close to its lowest in a month after a volatile few weeks for European bonds that have whipsawed as traders debated when the European Central Bank and the Bank of England may tighten monetary policy.

The 10-year Bund yield traded around minus 0.1 per cent at the beginning of the month while the 10-year Treasury yield was around 1.6 per cent before Powell pledged patience towards rate rises last week.