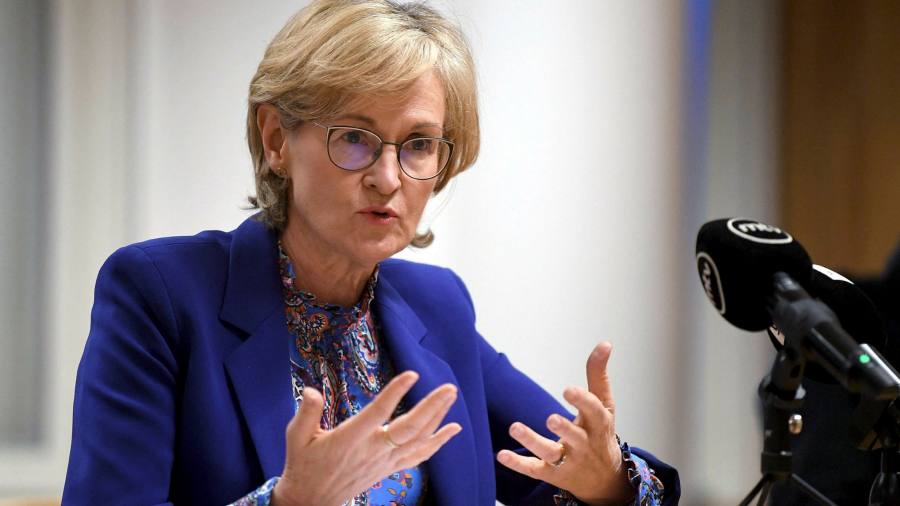 Brussels is planning to extend its temporary permit allowing European banks and fund managers to use UK clearing houses until June 2025, warding off a threat to financial market stability when the arrangement was set to lapse later this year.

Mairead McGuinness, European commissioner for financial services, told finance ministers on Tuesday that the commission would shortly begin consultations with member states on an extension to regulatory “equivalence” for another three years.

This would avoid any “short-term cliff-edge effects”, she said. The permit was due to expire at the end of June.

The planned extension is double the initial period Brussels had set aside for the market to prepare after Britain left the single market at the end of 2020. Clearing houses are central to staving off market instability, sitting between counterparties on deals and preventing defaults from cascading through the financial system.

EU politicians have long wanted to pull clearing of euro-denominated contracts from London, where LCH still handles about 90 per cent of all euro-denominated derivatives, according to data provider Osttra. Many are unhappy about the financial stability risks to the bloc from €83tn of open euro derivatives contracts being cleared in a market that is not in its direct oversight.

However, banks and asset managers have been unwilling to shift clearing of euro derivatives because of the costs of transferring positions out of London, a long-term project the industry estimates could cost it several billion euros. Politicians have also shied away from mandatory relocation of euro derivatives for fear of damaging market stability.

In the coming weeks there will also be a public consultation by Brussels on ways of making the EU an attractive destination for clearing, McGuinness said. “This public consultation will feed into a strategy on clearing to reduce in the medium term our over-reliance on UK [clearing houses],” the commissioner told the meeting of the Economic and Financial Affairs Council (Ecofin).

Derivative users prefer to concentrate their portfolios in one place and offset their positions with other swaps, such as US dollars. Netting all their positions saves users millions of dollars a day on the insurance required to back their deals.

Last year McGuinness admitted the June 2022 expiry date “was too short” to build up capacity in the eurozone over the medium term and said the commission would award an extension.

Last month the European Securities and Markets Authority, the EU market regulator, ruled that European banks and asset managers could continue to use UK derivatives clearing houses because the risks of shifting the business to the bloc outweighed its benefits.