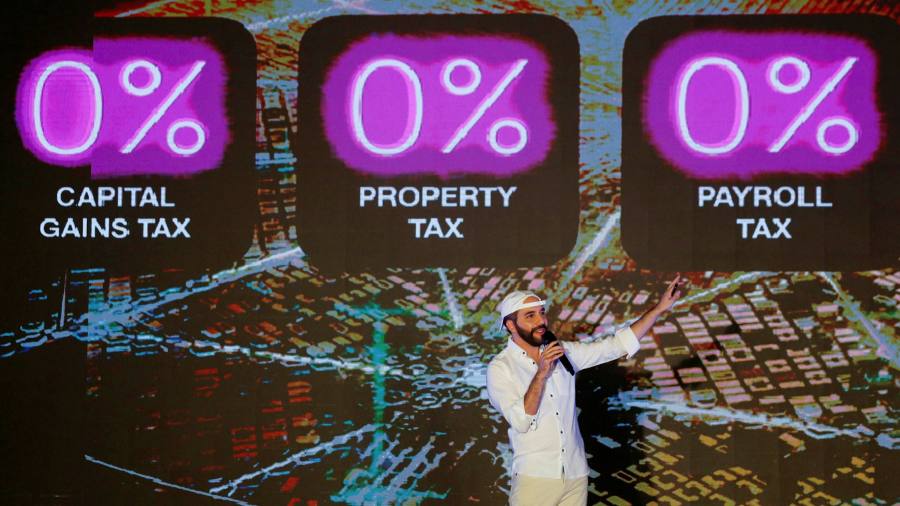 Bond investors have taken a dim view of El Salvador’s plans to borrow $1bn to fund a volcano-powered “bitcoin city”, saying the scheme could push the country further from access to traditional debt markets.

President Nayib Bukele, who in September made bitcoin legal tender in the central American country, said on Sunday that half the proceeds would be used to buy the cryptocurrency with the rest going towards infrastructure and bitcoin mining.

Emerging markets fund managers expressed little interest in buying the new bonds, which El Salvador plans to issue next year with an annual coupon of 6.5 per cent. That is far below the prevailing interest rate on the country’s existing overseas bonds, which have seen yields spiral higher this year as investors balk at the increasingly unorthodox direction of Bukele’s economic policy.

“Why would you lend them money at this level when it’s a distressed credit?” said Kevin Daly, a fund manager at Aberdeen Standard Investments. “They are shut out of the [conventional] bond market so they can’t finance themselves that way. I don’t know who is going to buy these bonds but it sure as heck isn’t going to be us.”

The sell-off in Salvadoran debt continued on Monday, pushing the yield on a bond maturing in 2032 above 13 per cent. The country has 10 international dollar bonds worth $7.65bn, roughly 30 per cent of its gross domestic product and about a third of its overall government debt.

Its next debt repayment is a $800m bond maturing in January 2023. That bond currently trades at a price of less than 84 cents on the dollar — and a yield of nearly 25 per cent — indicating considerable anxiety about El Salvador’s ability to make the payment.

The new “bitcoin bonds”, which will be sold in $100 tranches in a deal to be arranged by crypto exchange Bitfinex, may find a more receptive audience among small investors and crypto enthusiasts.

“This bond offering is something we think will be attractive to a wide range of investors ranging from cryptocurrency investors, investors seeking yield, ‘hodlers’, and ordinary people,” said Samson Mow, chief strategy officer of blockchain technology company Blockstream, which has been advising Bukele’s government on the plans. “We believe this bond has the potential to accelerate hyperbitcoinisation and bring about a new financial system built on top of bitcoin.”

One person working on the bond issuance said many would-be investors’ motives are not purely financial. “There is a desire to be part of something so groundbreaking,” the person said.

“Sentiment is positive because there is already a lot of capital in the digital token space. In fact, far less compelling projects have attracted more interest,” the person added.

But holders of El Salvador’s existing bonds worry that the scheme is unlikely to improve the country’s overall creditworthiness, particularly if its success persuades Bukele’s government it can mend its finances without the support of the IMF. Negotiations with the fund have been dragging on all year with little prospect of a breakthrough, analysts say.

“I wouldn’t be surprised if they managed to raise the money,” said Carlos de Sousa, a portfolio manager at Vontobel Asset Management. “But potentially the bitcoin bonds make the probability of an IMF programme even lower because they say we’ve managed to find a new source of financing.”

El Salvador had little prospect of regaining access to bond markets without at least the potential of future IMF support, de Sousa said, adding that without market access it would struggle to repay its 2023 bond.

Its relations with the US hit a further low on Monday when Washington’s interim chargé d’affaires in El Salvador, Jean Manes, said she would leave the country.

“We’re hitting pause because the government of El Salvador isn’t showing any interest in improving the relationship,” she said in a local news interview.