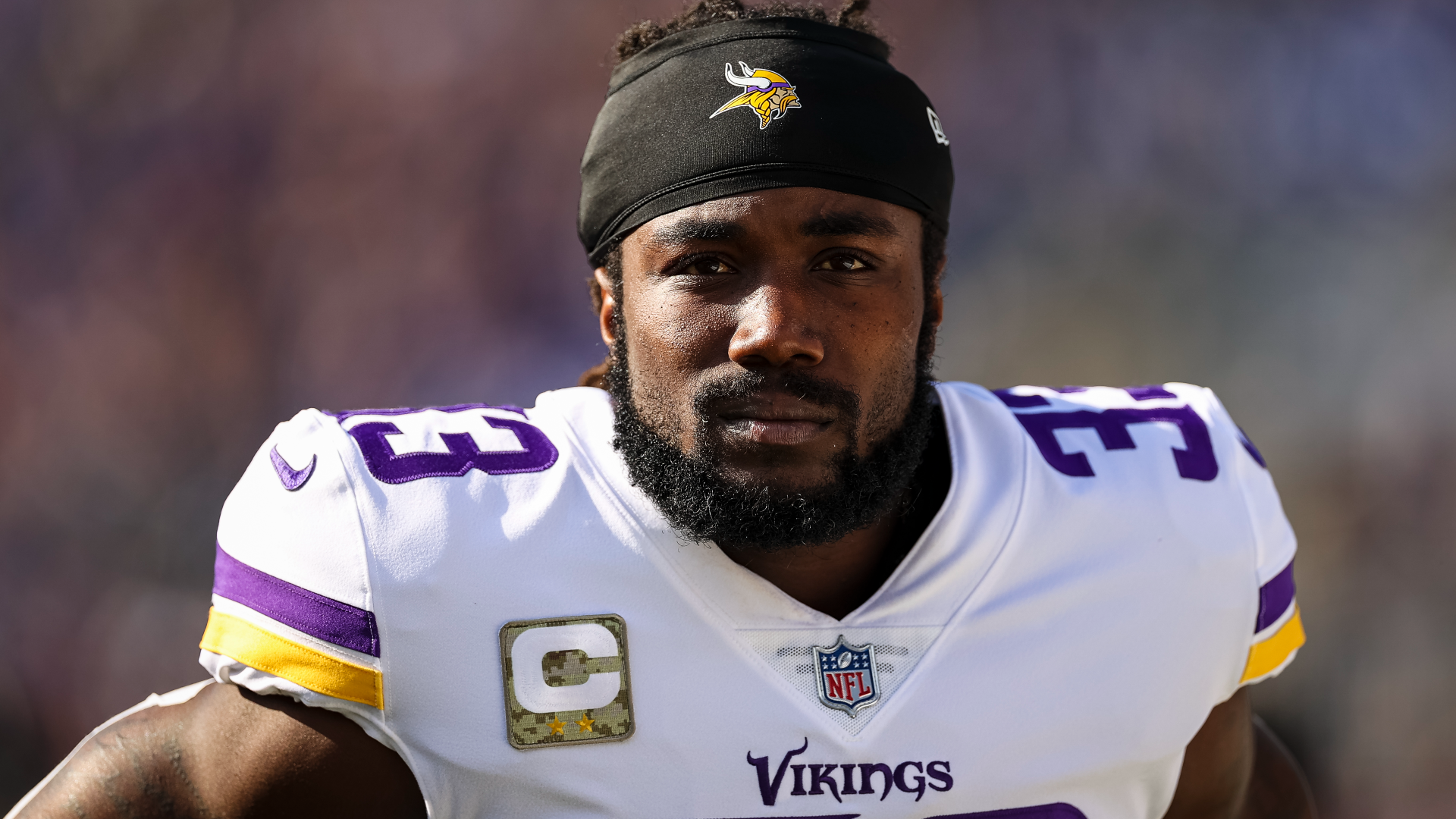 New reports emerged Tuesday night that Vikings star running back Dalvin Cook and a former girlfriend were involved in a domestic violence incident in November 2020, one that has led to pending litigation between the two parties.

Cook’s agent Zac Hiller relayed information regarding the incident to ESPN’s Adam Schefter and ProFootballTalk’s Mike Florio on Tuesday. Both Schefter and Florio, citing Hiller, reported a woman — later identified as Army Sgt. 1st Class Gracelyn Trimble — entered Cook’s home and assaulted him and a guest before sustaining injuries while in his house. They both reported the incident resulted in pending litigation.

Following initial reports of the incident, the Star Tribune (Minneapolis) published a story in which Trimble claimed to be the victim of the incident. No criminal complaints have been filed by either party, though Trimble has filed a lawsuit in Dakota County District Court in which she accused Cook of assault, battery and false imprisonment.

Here’s what you need to know about the domestic violence incident and pending litigation between Cook and Trimble:

Following initial news of the incident, Cook’s attorney David Valentini released a statement detailing the Nov. 19, 2020 incident to Schefter. He claimed Trimble — a former girlfriend who met Cook at a Florida beach in 2018 — entered Cook’s residence in Inver Grove Heights, Minn., via a “stolen” garage door opener. Valentini claimed Trimble, upon entering the home, punched Cook before spraying Mace on his and his two houseguests’ faces.

Following that, Valentini said, Trimble sprayed Mace in Cook’s face a second time before arming herself with a firearm and “forcing Mr. Cook and his guests, at gunpoint, to remain in his residence for the next several hours.” Valentini claimed Trimble tried to assault one of Cook’s guests again, causing the running back to intervene. At that point, Valentini said, Trimble fell to the ground and “suffered a small cut above her nose.”

Valentini claimed that, “for the better part of a year, Sgt. Trimble has been attempting to extort money from Mr. Cook” following the incident. Here is his full statement, via Schefter:

Statement from Dalvin Cook attorney, David Valentini, in response to a civil lawsuit filed today by a woman alleging that Cook assaulted her in 2020: pic.twitter.com/d1cOsV3tT7

Shortly after Valentini released his statement, the Tribune broke news that Trimble, currently stationed in Italy, had filed a lawsuit alleging physical and emotional abuse by Cook. Trimble told the Tribune that Cook gave her “a concussion, leaving a scar and taking her through hell.”

Per the lawsuit, Trimble flew to Minnesota on Nov. 19 to gather her personal belongings from Cook’s home, entering through the garage and grabbing Mace she had previously stored there. Trimble alleges in the lawsuit that Cook got angry when she asked him for help gathering her items. The suit alleges Cook “grabbed her arm, and slung her whole body over the couch, slamming her face into the coffee table and causing her lower forehead and the bridge of her nose to bust open.”

The lawsuit alleges that, at that point, she attempted to spray Cook but accidentally sprayed herself as a result of him overpowering her. She went to the shower where she alleges he assaulted her again. Trimble then entered Cook’s bedroom and grabbed his gun before calling her friend. The running back reportedly overheard and threatened her upon hearing Trimble make the call, beating her with a broomstick.

The Tribune reports the two continued to see each other occasionally before permanently ending things in May.

The lawsuit includes purported texts between Trimble and Cook in which the running back apologizes for his actions. Trimble also included photos that allegedly followed the incident in which her face was cut and bruised (warning: the link contains images some people may find disturbing).

Valenti claimed Trimble is trying to extort Cook for “millions of dollars,” the basis for which stems from medical expenses from injuries she sustained from Cook. Valentini’s statement was reportedly a result of Cook receiving notification of the lawsuit, in which he is accused by Trimble of assault, battery and false imprisonment. The Tribune reports Trimble has sued Cook for “unspecified monetary damages” and “accountability.”

Valenti and Florio, a former lawyer, claim Cook was within his rights to defend himself from Trimble based on Minnesota’s Castle Doctrine law.

Subsection 4 of the law — which deals with use of force against another person — outlines the parameters by which Valentini claims Cook was justified in using force. Per the section, reasonable force may be used “when used by any person in lawful possession of real or personal property, or by another assisting the person in lawful possession, in resisting a trespass upon or other unlawful interference with such property.”

Cook, selected 41st overall in the 2017 NFL Draft, was charged with misdemeanor battery following a July 2015 incident, when he was still enrolled at Florida State University. He was alleged to have punched a woman outside a bar but was found not guilty and was later reinstated at Florida State.

NFL, Vikings’ statement on the incident

Though neither Cook nor Hiller made statements on Tuesday night, Cook’s team did and said they were just recently made aware of the incident. In response, they notified the NFL and are currently gathering more information.

The NFL also confirmed it had received word of the Vikings’ complaint.

NFL statement on dispute between Dalvin Cook and an acquaintance: “The Vikings notified the league of the matter. We will decline further comment at this time.” https://t.co/li1IRtZlcK