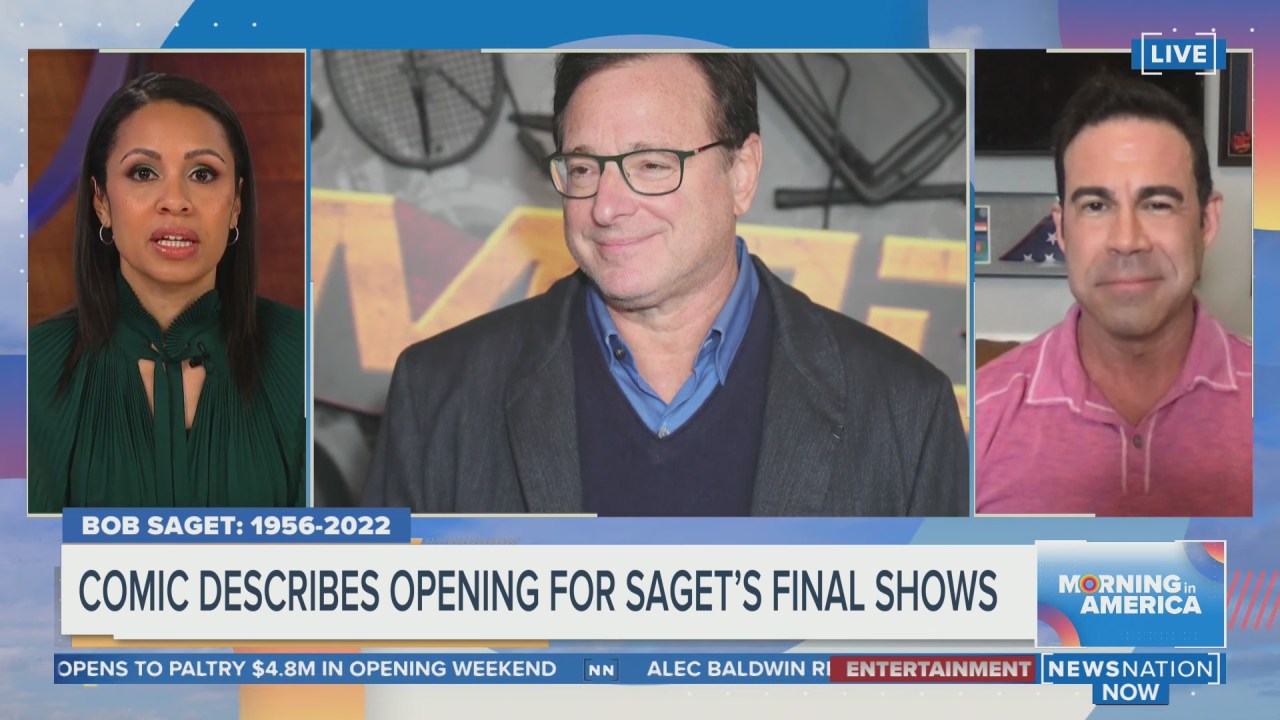 (NewsNation Now) — The comedian who opened for Bob Saget’s final standup shows said the beloved comedian was “beaming” while performing and offering bits of comedy advice in the hours before his death.

“I gotta tell you, last night hurt really bad. To lose an idol, to lose someone you’d worked with, hurts even when it’s only been a few hours,” Comedian Tim Wilkins said on “Morning in America.” “And you know, we parted ways. And I really thought, hey, we’re going to do more together.”

Wilkins and Saget were in Florida for the former “Full House” star’s new “I Don’t Do Negative Comedy Tour.” After warm audience receptions to his gigs Friday in Orlando and Saturday in the Ponte Vedra Beach resort area, Saget celebrated online.

“I’m back in comedy like I was when I was 26. I guess I’m finding my new voice and loving every moment of it,” he posted Saturday on Instagram.

“He was so happy back on stage,” Wilkins said. “He was crafting a special and he had a message.”


‘I am broken.’: Celebrities stunned by Bob Saget’s death

Raunchy comedy was a part of Saget’s standup sets, although it wasn’t part of his long-running network TV shows where he quickly became a beloved fixture. He hosted the family-friendly “America’s Funniest Home Videos” and played the squeaky clean widower and dad to three young girls on “Full House.”

Wilkins said the audience’s reaction to Saget made it clear how beloved he was.

“They [the audience] were crazy. It’s somebody who’s so loved like Bob, they cheer when he comes out, which a lot of comedians don’t get, I mean you get a clap, but it’s like hey, here’s the next guy. But this was real love,” Wilkins said. “And they loved him, obviously enough to keep him out. A comedian knows when it’s time to leave the stage. And in an hour 45 and two hours. That’s a lot of love. They were responding really strong.”

Wilkins said he would treasure his final conversation with Saget and would always remember his feedback and praise.

“I changed my show between Friday and Saturday because great comedians make you want to be better every night, and he noticed the change and he said, ‘Keep doing that. Keep changing and keep pushing because that really is who you are. Continue to try to be who you are on stage,’” said Wilkins. “And I said, ‘Well it’s really hard not to try to be you. I really look up to you.’”

“It was just such an amazing experience to have somebody you really look up to take an interest,” Wilkins said to NewsNation’s Adrienne Bankert. “And you know, the reason we’re even talking is because he was so generous, he would share the spotlight of his last tweet and mentioned me. I can’t share enough what a generous and kind man he was.”

Saget’s cause of death is unknown at this time. The Orange County Sheriff’s Office expects the medical examiner to make the final determination.