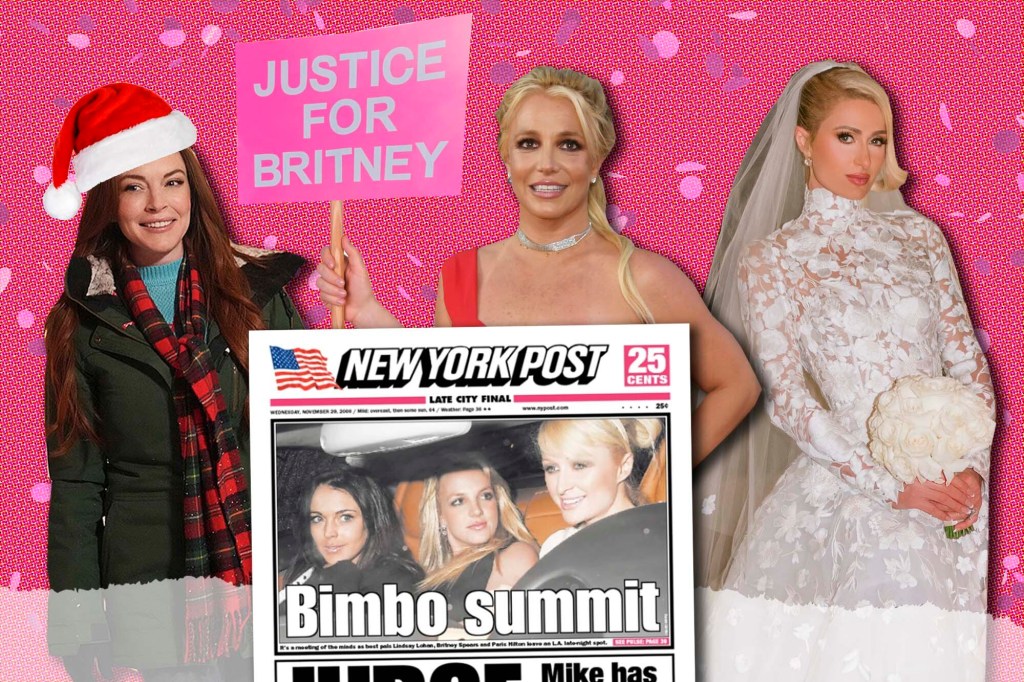 If a news cycle could smell, today it would offer a strong hint of 2006 with undertones of bad behavior and crotch shots.

In one holy, auspicious 24-hour period, Paris Hilton tied the knot, Britney Spears was officially freed from her conservatorship and Lindsay Lohan, it was announced, would be making her comeback with a Netflix rom-com.

For lack of a better sentiment: “That’s hot.”

It is almost 15 years to the day when the once naughty trinity who was among the early aughts’ most celebrated boldfacers were photographed piling into a car in what would come to be known by historians (or brilliant New York Post headline writers) as the “Bimbo Summit.”

The night is now etched in pop culture lore: Hilton, Spears and Lohan emerged, unsteady from the Beverly Hilton, sparking a paparazzi feeding frenzy. All three were luminaries in their respective fields — pop star, actress and heiress — in one place at one time.

It felt like a tsunami produced by the tabloid gods.

These hard-partying chicks were also avatars for the Hollywood club-going, swag hoarding, paparazzi-drenched culture that defined the era — before that old paradigm-shifting recession that made their frivolity and consumption seem a tad tasteless.

Soon after the fact, Newsweek conducted a poll which said 77 percent of American adults thought the trio had too much influence on the younger generation.

Paris’s popularity was usurped by her stylist best friend — a little unknown by the name of Kim Kardashian — who went on to edge her out with her own sex tape and a fuller rump. She found herself making a mint as an overseas DJ with a string of tourist trap clubs and endorsement deals— while fading dangerously close to the D-list on our shores.

A troubled Lohan was dogged by reports of difficult behavior, moved overseas and adopted a strange accent. And by now, we all know the sad tale of Spears who suffered a nervous breakdown and was put under a 13-year conservatorship that sparked the #FreeBritney movement.

Today’s headlines and Twitter trending topics felt like a warm hug and made me nostalgic for 2006. It was a simpler time where celebrities only wanted to get tuned up in the VIP section of a club, preen for paps in low-slung bootcut jeans and hope to get a good placement in Us Weekly.

They didn’t yell at you to vote, pretend to be legal scholars, political experts or care about marginalized communities for clout. They didn’t have lifestyle brands and proclaim themselves “CEO girl bosses.”

They were unabashedly out for a good time and numero uno: people you could really get behind.

In 2006, Twitter had just launched and people generally had low regard for oversharing.

Hell, we were still downloading music from iTunes, cared about who won “American Idol” and had an appetite for celebrity bad behavior, which we discussed face to face at the water cooler, not online.

Even as they’ve resurfaced, in tandem, as if the ghost of mean Perez Hilton had summoned them: they’ve seemed to flip the narrative. They’re making headlines for positive reasons, giving us Gen Xers and Elder Millennials hope and optimism.

Maybe their next summit will be a respectable affair the second time around.