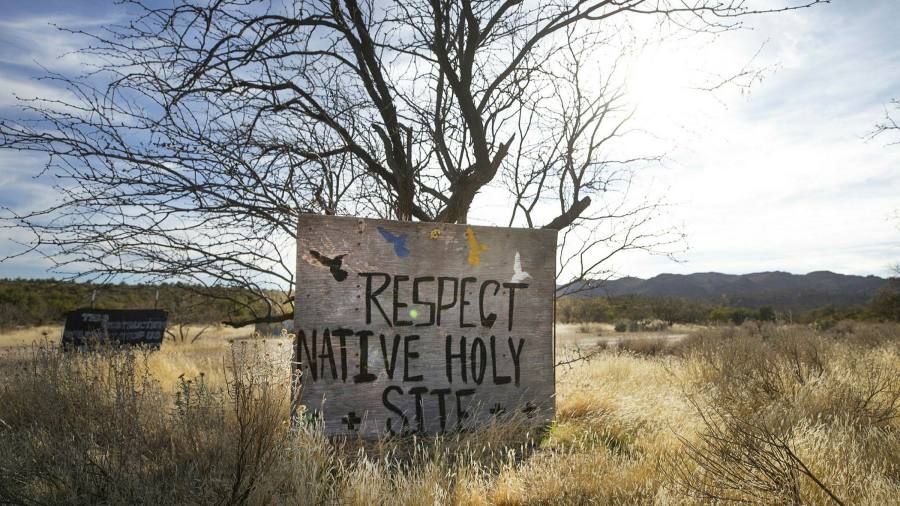 BHP is seeking direct engagement with Native American communities living near a vast proposed copper mine in Arizona, as its partner on the project, Rio Tinto, struggles to build trust among native landowners.

Resolution Copper, which has enough of the metal to satisfy 25 per cent of projected US demand for 40 years, is 55 per cent owned by Rio and 45 per cent by BHP.

The San Carlos Apache tribe, which has always opposed the project, has said Resolution’s proposed underground mine will cause a huge crater, almost two miles wide and 1,000ft deep, that would swallow Oak Flat, a site of special religious significance for the tribe.

Speaking after BHP’s shareholder meeting in London on Thursday, chief executive Mike Henry said it was “appropriate” to engage with indigenous groups around Resolution Copper to get a “full, rich understanding of the local dynamic”.

While Henry said BHP was “very supportive of Rio”, he added: “We believe it’s appropriate for us to have some direct interaction, just so we can gauge the mood in the group. But it’s not about us seeking a leadership role . . . that very much rests with Rio.”

The battle for Oak Flat is likely to be one of many land disputes as miners seek to develop new “ore bodies” to meet rising demand for copper, which is needed to manufacture electric vehicles and wind turbines.

Rio badly damaged its credentials among indigenous peoples last year when it destroyed a 46,000-year-old sacred Aboriginal site in Australia to make way for a mine expansion.

A Native American leader in Arizona declined to meet Rio’s chief executive Jakob Stausholm when he visited the state this month.

Terry Rambler, chair of the San Carlos Apache tribe, said he would rather spend time lobbying Congress to reverse a land transfer agreement that would give Resolution Copper access to all of the metal that sits below the site, 65 miles east of Phoenix.

Henry, asked if he felt BHP could do a better job of bringing people on board than Rio, said his company had a “very strong record” of engaging with First Nation peoples, although it was “not perfect”.

“We support their [Rio’s] efforts but we do believe a degree of direct interaction is appropriate so we have a full, rich understanding of the local dynamic with First Nation parties as well as local communities,” Henry added.

Big mining groups are trying to increase their exposure to copper, a metal that will be crucial as the world switches to cleaner forms of power and energy. However, big deposits such as Resolution Copper are becoming harder to find.

The San Carlos Apache tribe is supporting a bill under currently consideration in the US Congress that would undo 2014 legislation that approved a land swap that allowed for the transfer of 2,400 acres of national forestland, including Oak Flat, to Resolution Copper.

Rio executives believe it will be possible to go ahead with a smaller mine even if the land swap agreement is repealed. Henry said BHP would have to look at the economics of any refreshed project before making a decision on whether to develop the deposit.

“We would have to look at the exact parameters of a refreshed project if that were to be the case. Now, if it was sufficiency high-returning and it held upside growth potential and very importantly . . . local stakeholders were supportive then we would of course consider it.”

At Thursday’s meeting, BHP’s London investors voted to support its climate strategy, with 83 per cent of votes cast backing a resolution to approve its plan to tackle carbon emissions.