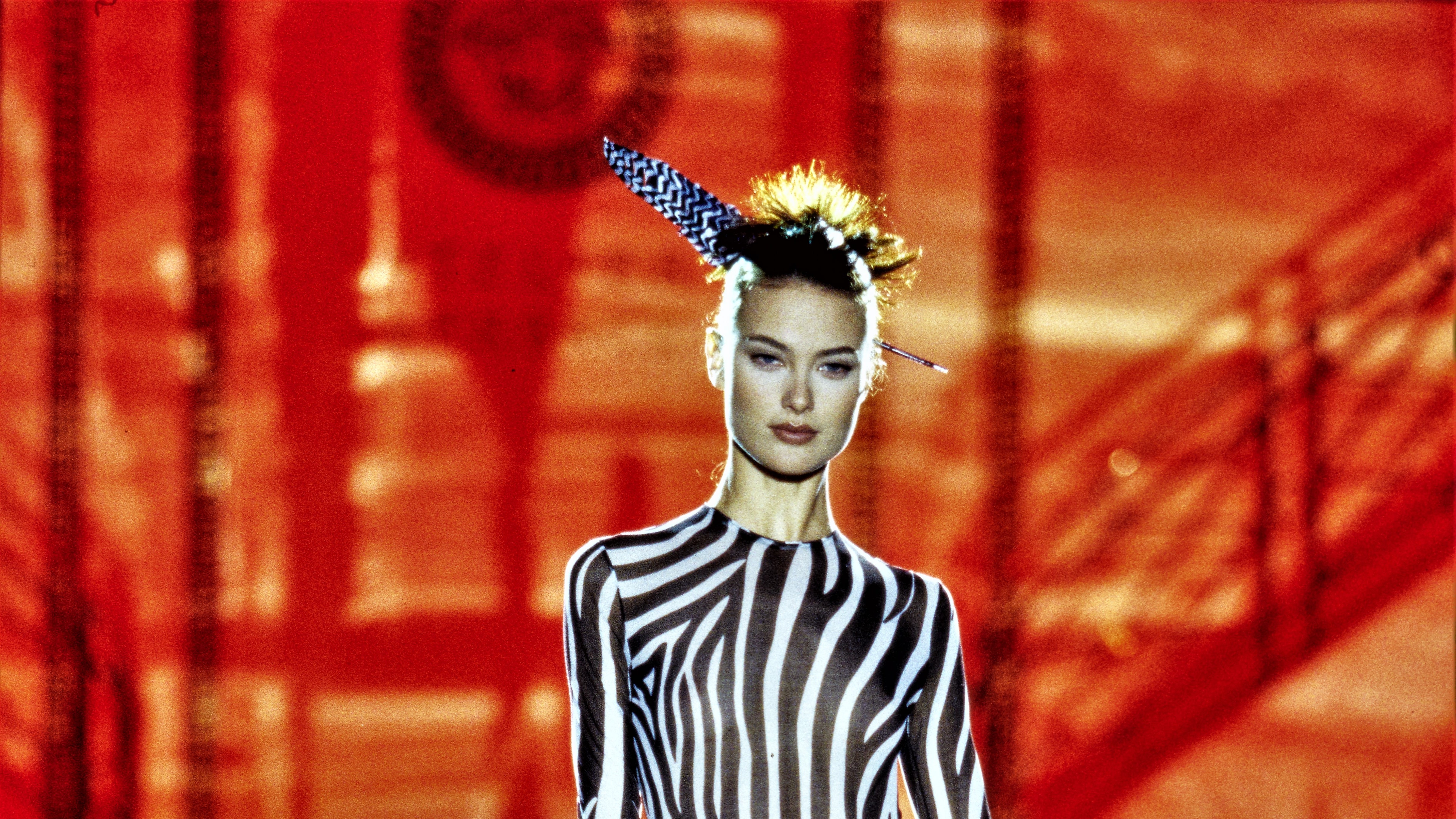 Editor’s note: Vogue Runway is celebrating the most wonderful time of the year by adding six magical—and newly digitized—1990s haute couture shows to our archive. Atelier Versace’s spring 1996 collection was originally presented on January 20, 1996, at the Hotel Ritz in Paris.

Graphic havoc and glamour collided in Gianni Versace’s spring 1996 couture collection. Animal prints was a major story, as were dichotomies. The designer, in whose work the Catholic imagination was alive and well, always played “good” girls off “bad” ones. In addition to exploring unexpected color and pattern combinations, he used unexpected material mashups, pairing leather and lace, for example, and contrasting sheers and opaques, and applying print head to toe—even to his signature metal mesh.

Versace came of age in the 1960s, and many of his designs for daytime, like cookie-cutter suits and swingy little jackets, reference the ladylike and streamlined shapes of the early years of that decade, saving decadence for his after-dark looks. Some, like the leather dress with sheer insets, were surprisingly delicate, with a sprinkling of beads as tiny and sparkling as caviar roe.

Sheath dresses were updated with curved seams that framed necklines and backs, and slip dresses in animal prints had real bite. The lushest looks, worn by Kirsty Hume and Shalom Harlow, paired printed leotards with straight-front skirts that were gathered at the back into decadent, trailing folds.

This confident collection was presented at the Ritz Paris, where models walked on a runway constructed over the hotel’s swimming pool and in front of an audience of assorted glitterati and rock stars including Sting, Brian Ferry, and Jon Bon Jovi, whom the designer had just signed to star in an advertising campaign.

Beyond the front row, the show brought rock and royalty together in unexpected ways. The coat-wearing Queen Mother was referenced in the soundtrack, which Vogue’s Hamish Bowles reported was “a mini Versace operetta that Elton John had composed for the designer in two days flat.” It contained “the immortal line, ‘Some people are born royal. Others become queens on their own.’” That being said, it would take a king’s ransom to secure a piece from this collection; a chain-mail top not unlike the one modeled by Harlow is currently available on 1stDibs for a cool $32,000.