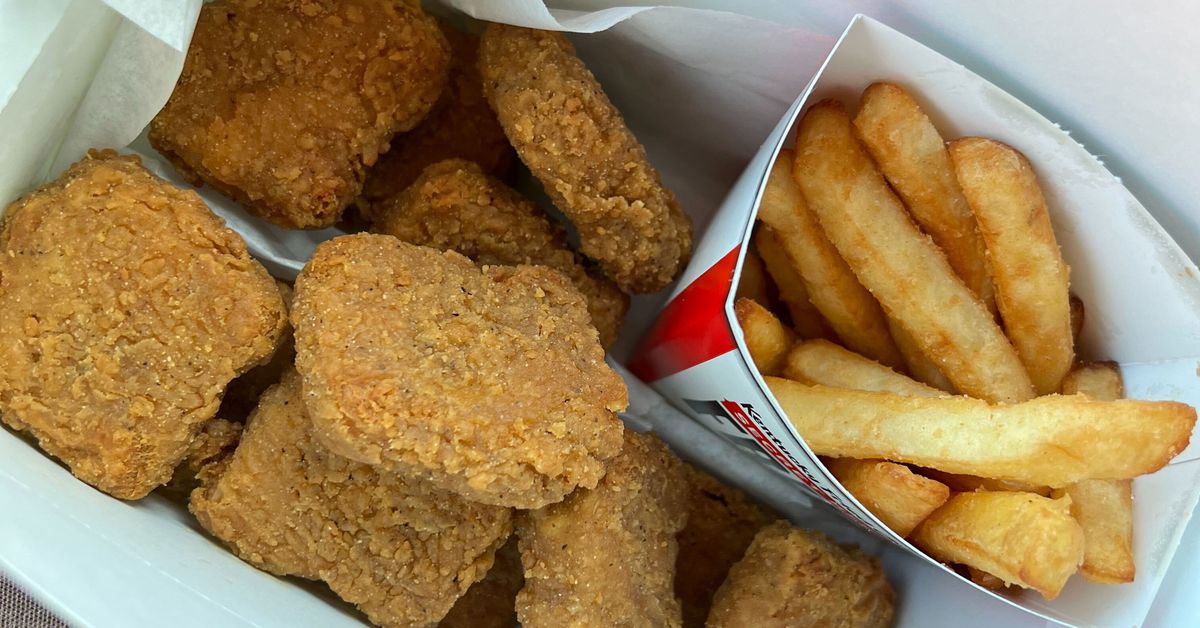 On Monday, Kentucky Fried Chicken’s long-awaited fake-meat nuggets officially arrived at the chain’s nearly 4,000 locations across the United States. The announcement couldn’t have come at a better time for the chain, which is apparently struggling mightily with supply chain issues, at least in my corner of the world. In search of the plant-based nuggets, made in collaboration with Beyond Meat, I traveled to three different KFC locations, two of which were closed entirely due to a shortage of bone-in chicken. That held true at the third location, which remained open but serving only boneless tenders and the new Beyond nuggets.

Chicken nuggets make for the perfect fake-meat entree for fast-food chains, largely because chicken nuggets are already essentially a paste of ground-up, unidentifiable meat and seasonings. What matters, ultimately, is that the nugget is easy to scarf and serves as a solid vehicle for dipping sauces like barbecue and honey mustard.

KFC’s Beyond nuggets — available in a 6-count or 12-count box — look like any other chicken nugget. They’re a bit larger than the typical fast-food nug, and boast a crispy breaded exterior studded with bits of black pepper. Inside, though, is where things get weird. Most of the time, when you encounter a plant-based chicken replacement, the “flesh” tends to be light and a little spongy, as with a Morningstar Farms nugget or Impossible’s take on the fake chicken nugget that was recently piloted by Burger King; that sponginess is weirdly to the texture of, say, a McNugget — what I consider to be the height of the form.

KFC’s iteration is dense and thick, composed of thin layers that flake apart with only a little urging. That density is evident upon first bite. These nuggets are a little difficult to sink your teeth into, and slightly rubbery to chew. When dunked into the chain’s signature KFC Sauce, though, it’s pretty indistinguishable from a nugget that’s made with actual chicken. The flavor is appropriately meaty and seasoned well, even if the texture isn’t exactly what you’re expecting.

The truly important question, though, is who are these nuggets for? KFC emphatically claims on its website that the nuggets are “not prepared vegetarian or vegan,” meaning they’re swimming in the same fry oil as the chicken. That’s pretty standard in fast food — McDonald’s new McPlant burger is cooked on the same griddle as its other burgers, and the same goes for Burger King — but it doesn’t exactly open up new options for vegan and vegetarian eaters.

If this launch is an attempt to entice meat-eaters to choose plant-based options more regularly, the price of KFC’s Beyond nuggets is going to be a problem. A 12-piece nugget combo, which includes a side item, two dipping sauces, and a drink, clocks in at $14.99. After tax, that’s almost as much as a 12-piece bucket of real-deal chicken, or $2 more than an order of eight boneless tenders. A 6-piece serving of just nuggets is $7, which is pretty staggering considering that chains like Wendy’s or McDonald’s serve a similar quantity of nuggets for less than $3. It doesn’t feel like a bad value, necessarily — the meal is definitely filling and satisfying — but it’s not exactly a budget-friendly option.

But as KFC and other chains continue to introduce plant-based options, it’s likely that the price will come down. Burger King’s Impossible Whopper cost nearly $8 when it was first launched in 2019, and now you can score one for $3 as part of the chain’s 2-for-$6 burger deal. What is unclear, though, is whether or not these price declines can be attributed to the actual popularity of the meal — meaning that Burger King is selling enough Impossible Whoppers to bring the price down — or waning interest.

Time will tell whether or not KFC is able to convince its customers that Beyond nuggets are just as good as the chicken that turned the chain into a global success story, and even though they’re about 90 percent of the way there in terms of flavor, there are still some kinks in this process that need to be worked out. For plant-based meat alternatives to have a real, meaningful future in the world of fast food, chains like KFC have to figure out how to better mimic the texture of the meats they’re seeking to replace.