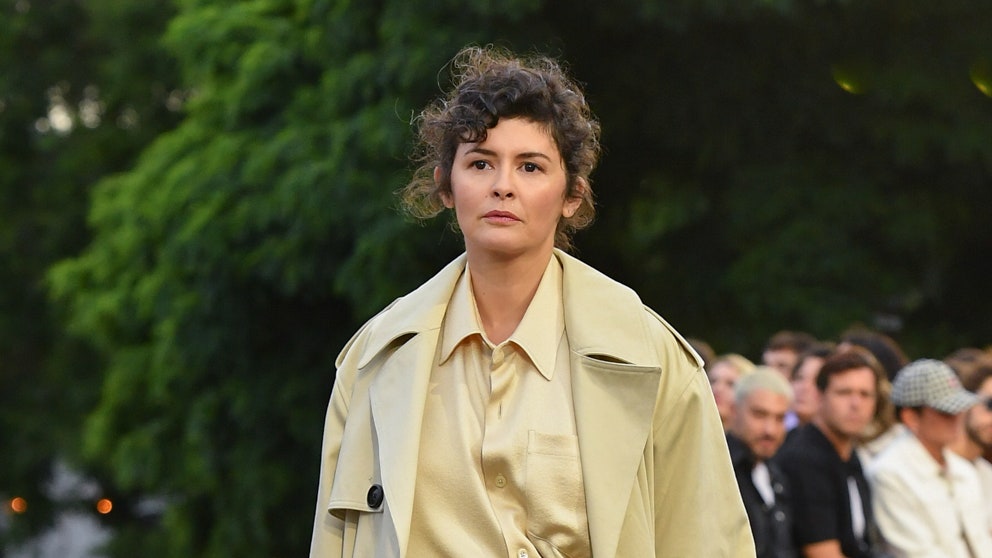 Ah, Paris. When you catch it not in une mauvaise humeur, it really is top. Tonight we were at the top of Paris, in the grounds of La basilique du Sacré-Cœur with the city laid out below, gleaming in the sunny dusk like some enormous thriving platter of life. At the bottom of the steep flight of stairs that lead up to the church was a crowd of screaming fashion fans, driven wild at the sight of Naomi Campbell.

Up on high Alexandre Mattiussi was showing an Ami collection that leaned lovingly into its signature tropes of modernized Parisian cool. Catherine Deneuve and Carla Bruni were in the audience alongside Campbell. Extraordinarily, Audrey Tautou—Sacré-Cœur’s Amelie herself—was lured out of her long public retreat to open the show. Other key cast members included Liya Kebede, Karen Elson, Precious Lee, Cara Delevingne, and Kristen McMenamy. We were in menswear week, yes, but hey. This was a power play as well as a Paris play.

Ever since budget has allowed, Ami shows have been elaborate—remember the rooftop show, or the wheatfield show—but last year Mattiussi took a clearly very significant investment from Sequoia Capital that ratcheted up the production values several levels tonight. “They’re young, cool, easy, and they let me do whatever I want,” he said: “they are super supportive.” This was reflected in the casting, the location, and the after-party—which felt like it was going to turn into a rager as your correspondent regretfully bowed out—but also, most crucially of all, in the clothes.

Ami was an exclusively menswear label from its founding in 2011 until as recently as 2019, when it expanded into womenswear. This evening Mattiussi expanded his menswear modus operandi—the presentation of carefully idealized observational fashion via looks and pieces based on real Parisian types and stereotypes but then applied with a cleverly restrained patina of enhancement—completely comprehensively to womenswear. There was a formidable array of bags, a new category, and shoes all intricately detailed with the logo that Mattiussi first doodled as a student. Multiple dialects of bourgeois archetype—including some apparently modeled on French editors of Vogue—were gently mashed together to create a beguilingly approachable and good-natured French wardrobe.

In menswear the work was very consistent with Ami’s original model of producing highly unpretentious—friendly, in fact—looks that very gently blurred generational dress codes (as they were back in 2011). Mattiussi said: “It is still about sharing the values of love, friendship, fraternity, and kindness. And not trying too hard. This is what is natural for me as a person and designer. And it is a postcard again—the latest episode of Ami in Paris.” It left you in une bonne humeur.