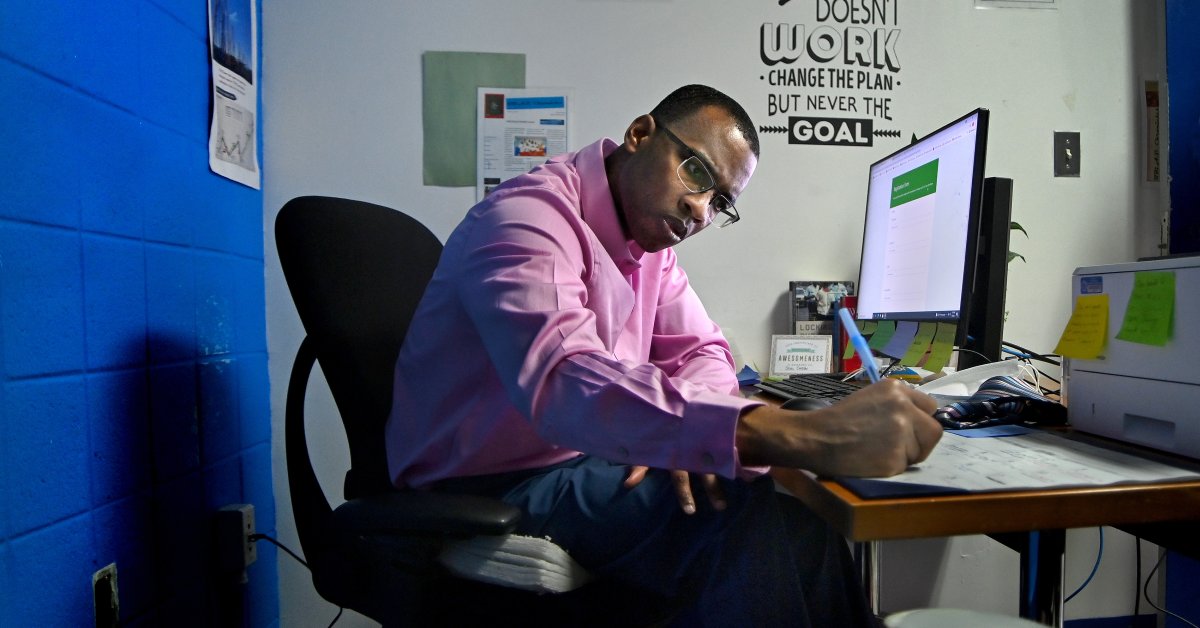 On Nov. 22, Joel Castón—dressed head to toe in a dapper bright blue suit—exited the D.C. Jail to take his first breath of freedom in 27 years. Surrounded by a large crowd of family, friends, and community leaders—all of whom had been waiting six plus hours for his release—it seemed like his cheeks and arms might fall off from so much smiling and hugging. And then, of course, there was pizza.

From inside the jail, Castón, 44, had founded a mentorship community for emerging adults. On Juneteenth of this year, he became the first incarcerated person to win public office in D.C. as an Advisory Neighborhood Commissioner. He has spent the last few months taking back-to-back Zoom calls, emailing constituents, and pitching his financial literacy business to prospective partners. But even with a platform where he emphasizes “giving a voice to the voiceless,” his constraints remained quite visible.
[time-brightcove not-tgx=”true”]

Thanksgiving, however, marks a new chapter. Below, Castón—who was charged with murder at the age of 18—reflects on his decades-long incarceration, shares his experiences as a Black man carving out mentorship opportunities for himself and his peers, and discusses his plans for the future. “My nickname is going to be viento, which is wind in Spanish,” he says. “Wherever the wind blows, that’s where I’ll be. And I’m going to be everywhere.”

Earlier this fall, I was released for twelve hours on furlough—I went to Denny’s. As I ate, I quickly noticed the fork was heavy in my hand. The metal hitting my teeth felt off. I realized I hadn’t used a real fork in over a quarter of a century. I’ve been incarcerated since 1994—I’m used to plastic.

I grew up in Ward 8 of Washington D.C. We grew up listening to Chuck Brown’s hit “We Need Some Money.” And money ruled everything.

Welfare checks came once a month, and people literally went from rags to riches in a couple of days. You started to see this influx of money in the hands of drug dealers. We didn’t call them drug dealers, we called them big boys. These were individuals I looked up to; they’d come up to the ice cream truck, pull out a knot of money and give it to everybody. They represented success. And that’s the only success that you saw.

Soon enough, you start to see the same people you idolize get robbed, shot, killed. You realize they didn’t have a gun and think, well, I don’t want anyone to kill me. Neighborhood turf wars are so entrenched in the mindset of young people. It makes me teary-eyed thinking about it, because no one starts out saying, “I want to be violent.” But it’s survival of the fittest. And then you go to prison.

One of my mentors once said that so many of us act out scripts that someone has written for us. That clicked for me: here I was, trying to be like all the big boys. They wrote a script for me—and somebody wrote a script for them. So I decided to write my own script.

Alongside my colleagues Tyrone Walker and Michael Woody—both also tried as adults under 25—we built the Young Men Emerging (YME) program inside the D.C. Jail. The frontal lobe doesn’t fully develop until your mid 20s. So we asked: why are young people who have committed crimes during this transitory phase being tried as adults?

Then we asked: what do these young men need? We felt the answer was programming led by those who understand their trauma. Our mentees do not question my knowledge as it relates to being incarcerated. That’s irrefutable. That’s their buy-in.

Inside of YME we have a structured environment—not disciplinary, but in a mentorship capacity. The YME model centers personal growth, education, and other transformative services for young system-impacted men ages 18-25. There’s a certain time you have to get up in the morning. You have to take care of your room for inspection. We want our guys to ask, “what does it mean to take pride in my living space? How does that reflect on me as a person?” We also have a monetary system—you can make money, or deposits in your account. You can also get deductions from your account. My team created assignments like cleaning communal spaces that, when completed, warrant payment. Our mentors also came together and bought commissary items and translated them to YME money, which created incentives for individuals who don’t have any money coming in.

Now when these guys go to court, they’re proud to talk about their achievements and their advancement inside YME’s community. One of our first mentees was literally released last month because he was a member of YME. If I can get you acting like a citizen on the inside, that will follow you on the outside.

The Justice Policy Institute hired me this year as a consultant so that I can roll out programs similar to YME [in other jails and prisons]. I currently serve as an expert in the field so I can help turn things around for my brothers and sisters at Rikers Island in New York City. We know it’s not debatable that they’ll close Rikers, but in the meantime, individuals are still housed there and need to be in an environment conducive for any human being.

The fact is, a punitive system is not beneficial for society at large. People on the inside will, sooner or later, return back to society. The question is: what type of individual do you want to return? It’s in the best interest of all institutions to have a rehabilitative system in place. The main priority, though, is preventing people from coming here in the first place. We need to put structures in place long before a person becomes involved with crime. The sad fact is that even though Latinos and Black people represent 13% of the US population, we make up 40% of the prison population. We’re bearing the brunt of the prison industrial complex.

Once someone like me takes ownership and says, I’ve been reformed, I believe in what it looks to be a citizen, and I want to contribute, they should be afforded the opportunity to do so. It’s a benefit to everybody. That’s why I ran for a seat on D.C’s Advisory Neighborhood Commission (ANC).

With the ANC, D.C. has created a footprint where ordinary people can run for office and vocalize the priorities of their neighborhoods: ideas around community engagement, or what to do with vacant lots. That’s grassroots. When presented with the empty ANC seat in my Ward, it was a no brainer. I ran and I won. I am the first incarcerated person to be elected into public office in the city.

These aren’t glass ceilings, they’re cement—and I’m the fool trying to bust through them. But I’m beginning to see how impactful my win is. Incarcerated people, we sometimes think our voices don’t matter. But Joels and Joelitas can bring value to the table if you give them a chance. Policies have to be rewritten to allow someone like me to qualify to be a politician, to be an investor, to be a banker. If we can do that, then we can open the floodgate. We’re an asset, not a liability.

—As told to Abigail Glasgow. Glasgow met Caston in 2018, while both took classes in the D.C. Jail as part of Georgetown University’s Prisons and Justice Initiative.