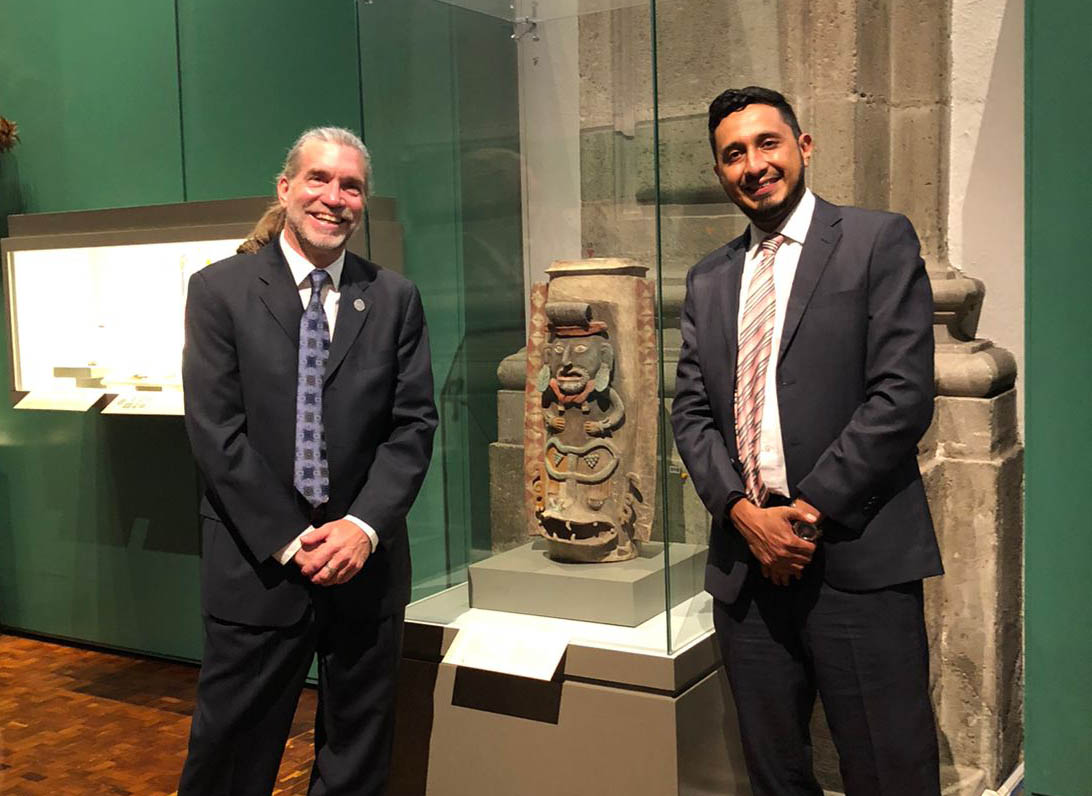 He walked past the ceramic Mayan urn dozens of times. Archaeologist Joel Palka knew from his extensive experience with Mayan culture and art that the urn was unique. It stood 3 feet tall and depicted the full body of a cave-dwelling black God — not just a face. The artifact would take Palka on a surprising journey and eventually lead to international recognition during Mexico’s 200th anniversary of independence celebration.

Palka, an associate professor with Arizona State University’s School of Human Evolution and Social Change, started traveling to Albion College in Michigan in 1999 because of its Mayan archive, a collection of papers and artifacts donated by an alumnus. Palka passed the glass case with the urn in the Albion library over several years while visiting the archive for research. He was working on a book about Mayan culture change that relied on historical documents and images.


While he was interested in the urn, he said he was focused on getting his book done.

“I’m thinking, ‘OK, very interesting piece.’ It shows this black God coming out of a cave on a mountain,” Palka said.

Palka said the urn in the library was very similar to urns found at a famous Mayan site called Palenque in Chiapas, Mexico. However, unlike the Palenque urns that normally consist only of a face, this one included a full body. Palka also found images taken by the explorer who donated the urn in a cave in Lake Petha in Chiapas. This remote, unexplored site is very close to the area Palka studies.

As time passed, Palka began talking with the special-collections managers of the Albion College library about repatriating the urn to Mexico.

Two months after that conversation, Palka was in Chiapas to get research permits from the Regional Museum of Anthropology and History of Chiapas in Tuxtla Gutiérrez (Museo Regional de Antropología e Historia de Chiapas). As Palka entered the Mayan hall exhibit, he saw something unusual that caught his attention.

“It was weird, it was totally weird!” Palka said. “So that urn that’s kind of smirking at me for 10–12 years in Albion — I walk into the museum in Chiapas, Mexico, into the Maya hall, and there’s the Albion urn smirking at me.”

Was it a copy? Was the urn returned from Michigan?

After marching into the museum director’s office trying to figure out what was going on, Palka soon learned the urn in the Chiapas museum exhibit was not the Albion urn, although it was from the same region, Lake Petha.

Palka said it’s “unheard of” to find two identical ceramic Mayan urns. He said there are some Zapotec examples from tombs in Oaxaca, Mexico, but not Mayan ones.

The next step was to find out if an ancient Mayan artist twinned these urns for some cultural or religious reasons. Or perhaps the explorer from Michigan who found the urn made an exact copy — something Palka said is very hard to do.

Palka received permission to extract clay from both urns to determine their authenticity, and he used two different methods to analyze the clay. The analysis of both samples was done in labs with archaeological chemists. He worked with Mexican archaeologist Josuhé Lozada to get clay samples, research permits and co-author publications.

Once Palka knew the artifacts were probably from different caves around Lake Petha in Mexico, he worked closely with Albion College and Lozada to repatriate the Michigan urn in spring 2021.

But there was one more twist in this story.

Yet another Lake Petha urn was found of a Mayan moon and maize goddess, making these ceramic urns a trio. The urn featuring the female goddess was in storage for 50 years, then turned up on display at the Maya Museum of Cancun (Museo Maya de Cancún), where Palka heard about it.

In September, Palka was invited to a new exhibit in Mexico City displaying the Chiapas urn and the moon and maize goddess urn. The exhibit is located at the National Museum of Anthropology (Museo Nacional de Antropología). Palka was an honored guest invited by the president of Mexico’s Cabinet and Jorge Mendoza Yescas, consul general of Mexico in Phoenix.

The ongoing exhibit is called “The Greatness of Mexico” (“La Grandeza de Mexico”). Palka says an extension of this same exhibit is in the Secretary of Public Education (Secretaría de Educación Pública) building, where the urn from Albion College is being exhibited.

This exhibit unveiling coincided with the celebration of Mexico’s 200th anniversary of independence in Mexico City, where Palka was on center stage. The internationally televised event featured the Mexican government thanking Palka and ASU for their collaboration in repatriating the urn to Mexico.

Palka hopes all three Mayan urns will eventually be returned to the Chiapas museum.